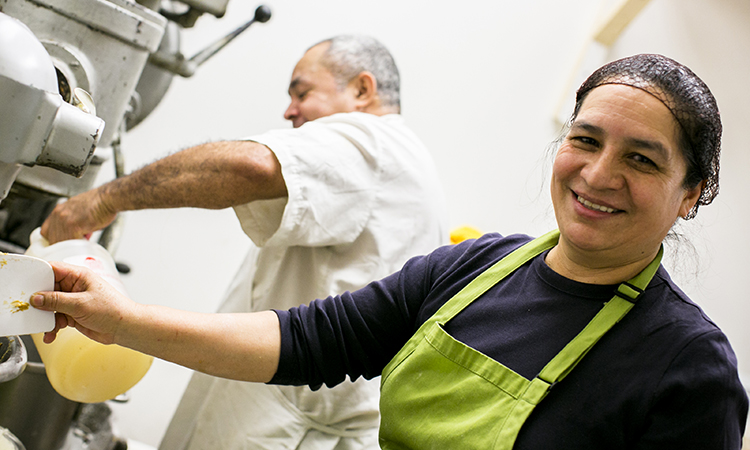 After a catastrophic earthquake devastated Guatemala on Feb. 4, 1976, Lorena Giron, who was just twelve years old at the time, was trapped under the rubble of her collapsed apartment for hours. She was eventually pulled out of the debris by a rescue team — but her family never made it out. “All of my siblings as well as my mother died,” Giron says. “I was the only survivor.” The earthquake claimed approximately 23,000 lives. It was during this time of crisis early on in her life that Giron first experienced the powerful forms of community-led relief efforts that tend to arise spontaneously during times of acute crisis — something that she would carry with her throughout her life. “I think that traumatic experiences make people stronger and more resilient,” says Giron. “After the earthquake, we were completely isolated. But in that moment, despite all the losses, we all came together to move beyond that disaster.”

Giron’s connection to grassroots, community relief was strengthened throughout her subsequent experiences during the Guatemalan Civil War, which was a more chronic disaster that afflicted the country from 1960-1996. Giron’s husband was killed in the war, which she says was politically motivated. She says she knew then that she had to leave Guatemala. She moved to the United States, eventually finding herself in New York City, New York. She was living in the Rockaways when, remarkably, she experienced yet another disaster: Hurricane Sandy. At the time Giron says she was commuting two hours a day to get to work as a domestic housekeeper. After the hurricane hit, the commute became impossible, she says, and she lost her job, leaving her unemployed for six months. But then something unexpected happened at the church that Giron attended.

As a center for community action in a heavily immigrant and low-income community, Giron’s church regularly organized a number of events to address the local community’s challenges, including things like health campaigns and clinics with immigration lawyers. After Hurricane Sandy hit, the church began forming partnerships with other organizations and activist groups to provide help for those affected.

“One of the first organizations that came in was Occupy Sandy,” Giron says. “They came with the idea of inviting other churches into the mix and creating working groups.” Occupy Sandy was a newly formed community-driven relief effort that grew out of the networks and strategies developed by the Occupy Wall Street movement. It filled a vacuum left by the official disaster response and made a significant impact in boroughs like the Rockaways and the Far Rockaways. At Giron’s church, Occupy Sandy volunteers began setting up community kitchens and distributing food and supplies to those in need. What distinguished Occupy volunteers from other relief organizations was their style of relief work — it was always community-led and focused on community empowerment. “They were looking to collaborate with the community in order to provide this assistance.” Giron says. “It was very beautiful to see the way that they went about it.”

Occupy Sandy’s slogan was “another world is possible,” and their ultimate aim was to go beyond immediate disaster relief to begin addressing some of the systemic challenges afflicting the communities they worked with. It didn’t take long for this broader vision to take hold of Giron and her community. Giron had been dreaming of opening up a restaurant for some time before Sandy hit, and when she shared this dream with Occupy volunteers, they sprung into action. With the support from The Working World, a local organization that builds cooperative businesses in low-income communities, they began to explore how to turn Giron’s dream into reality in a way that would bring it under the framework of radical economic empowerment. In collaboration with the church, they began a twelve-week course that focused on launching a worker owned and managed cooperative. “One-hundred and fifty people showed up,” Giron says. “It was exciting because I learned I wasn’t alone in wanting to start a business.”

Giron and her fellow church members were already accustomed to working together cooperatively in their church, so the idea of starting a cooperative business felt natural to them. “What I really liked about it was that I wouldn’t be governed by any one individual, but that I would be a co-owner along with my co-collaborators,” Giron says. “The thought of governing a business together in a democratic fashion was very new and exciting to me.”

It wasn’t long before they opened their first business: a cooperatively-owned and run bakery called La Mies Bakery in the Far Rockaways. Like a lot of new businesses, it didn’t stay open for long, but for Giron, it was just the beginning of a new career in cooperative business development. “There were a lot of mistakes that we made with the bakery, and a lot of challenges that we faced where now, when I’m working with a business that is looking to start fresh, I can say, ‘Oh, you know, you can avoid these pitfalls by doing such and such things.'”

Giron is now a coordinator for Worker-Owned Rockaway Cooperatives, an initiative that works to equip Far Rockaway residents with the skills and financing to launch small, worker-owned businesses that fill various needs in their community. According to the Democracy at Work Institute, worker cooperatives have been shown to promote local economic development and to generate community wealth. In co-ops, profits go directly to workers instead of accumulating at the top or going to distant investors, and this makes a big difference in their impact on a community. This is especially true for underserved populations. Since most cooperatives are value-driven they tend to focus on the needs of their communities better than traditional, for-profit businesses.

Giron says the personal and community empowerment that comes with being involved in cooperatives is crucial to addressing the power imbalances that exist within the current economy. To date, her group has helped to launch four cooperatives, spanning from the sectors of construction to custom printing. There are two more in the works: a moving co-op and a childcare services co-op.

Moments of disaster and crisis often have silver linings. In this case, Hurricane Sandy awakened something in the community that had been dormant. And for Giron, the storm swept in a flood of solidarity and hope that has transformed her life for the better. “The most important thing for me has been the ability to help my community and to work with my community members,” she says. “Before, when I had my prior job, I was earning money for myself and for my family, but that was only for us — that was only for me. Now with the work that I do I’m directly working with my fellow community members. And for me that’s big because now I can help people to realize that their dreams don’t only have to stay dreams, that they can be realized.”

Paige Ruane contributed research and reporting for this piece. The interview with Lorena Giron was done in Spanish and has been translated to English by Smiley Rojas-Nuñez.

This story is part of a series on disaster collectivism, which includes a podcast — The Response — which explores how communities respond to crises, both in their immediate aftermath and over a period of months and years. For more information about the series or to listen to the podcast visit: www.theresponsepodcast.org

Header image of Lorena Giron courtesy of The Working World.