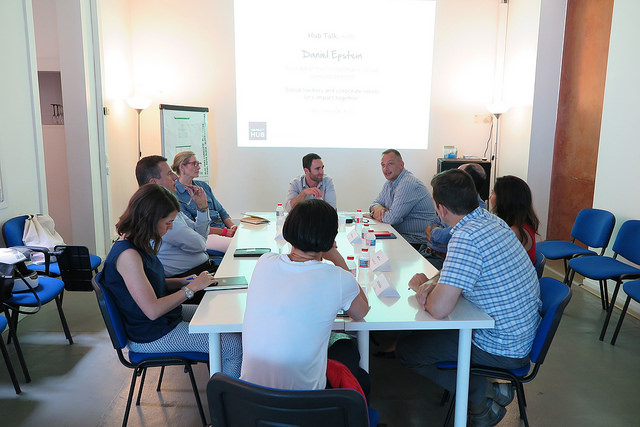 In November, I published a post here at Shareable regarding a nascent concept for a network of sharing economy startup accelerators in cities around the globe that would be focused on responsible sharing projects. I included a request for people to reach out to me directly, if they were interested in collaborating in any way.

I must admit the quality and diversity of feedback I received exceeded my expectations. Some contacted me with the possibility to launch similar accelerators in places like Boulder, Colorado, and Toronto, Ontario. Others offered to serve as mentors, while others connected me with potential investors and collaborators. I even received possible offers for space in different cities around the world. Thanks, Shareable community!

In speaking with Neal Gorenflo of Shareable a few weeks ago, it occurred to me that I could treat the whole process as a commons project, sharing progress with the community along the way — not just a one-way communication via this monthly column, but also leverage sharing tools for open collaboration with the Shareable community. There are several challenges I am facing already, and surely many more to come, where the wisdom of the Shareable crowd could be super-valuable for me, but would also lead to a collective effort with information on the process which would be offered to the community so that anyone else seeking to start an accelerator in their own city could leverage it for their own use.

So, here we go. In less than a month since my first post, a lot has happened — most of it very positive. Aside from the feedback and inquiries received and referenced above, we have started to make some great traction here in Barcelona:

The first big advance was that Diego Fernandez, director of Impact Hub Barcelona, agreed to actively support the Sharing Accelerator in Barcelona leveraging the mentor network and offering access to their space in Barcelona (Plaza Reial adjacent to Las Ramblas) for events, etc. Diego and his team (especially Laura Cabre) are committing to supporting the accelerator in any way they can.

Barcelona has a long history of supporting local and regional entrepreneurs as they get their start in the city. 22@ was one of the world’s first — and arguably still one of the best — examples of urban innovation districts dedicated to promoting entrepreneurship. Within Barcelona Activa is an organization based in 22@ and led by Montse Batsora and Itziar Blasco which seeks to give a boost to accelerators in the ICT/mobile arena to get off the ground in Barcelona. We had a first meeting with Itziar and there was real interest in supporting the sharing economy accelerator. For those not in the know, Barcelona is going through a transition with a government that is extremely interested in grassroots social innovation, so an accelerator focused on responsible sharing is, potentially, right up their alley. Hopefully, the next time I write, there could be more to report on this development.

One of the things I wrote about in my forthcoming book on urban entrepreneurship and innovation relates to the democratization of the tools for innovation and entrepreneurship. The exponential growth in innovation tools available for minimal costs — whether it be cloud computing, 3D printers in FabLabs, or inexpensive Software as a Service (SaaS) tools — has never been more accessible to start your own company. In the world of the sharing economy, Sharetribe is a SaaS tool for sharing economy startups which allows them to be up and live in hours with a functioning, customizable platform that even permits financial transactions. I am proud to announce that Share Tribe’s co-founder and CEO, Juho Makkonen, has graciously made a fantastic offer to sponsor the startups that make it into the accelerator.

As I mentioned in the first article, the success of a startup accelerator usually hinges on the quality of the mentor network. I have been humbled by the response of some of the most important global and local leaders in the responsible sharing movement who have offered to serve as mentors to the accelerator. These include, but are not limited to: Shareable’s co-founder, Neal Gorenflo; April Rinne; Duncan McLaren (co-author of the just-released book on sharing cities); Mara Balestrini and Javier Creus of the Barcelona-based think tank, Ideas for Change; Pablo Muñoz of the University of Leeds; Nathan Schneider, a pioneer in the platform cooperatives movement; and many others. Also, as mentioned above, Impact Hub already has an established network of impact mentors in Barcelona and throughout their global network who will also be accessible to the projects in the accelerator.

In my entrepreneurship courses, I encourage my students to embrace elements of the Lean Startup and to utilize a business model canvas. In the world of impact or social startups, not everyone supports their use — in part because the canvas does not have an element that focuses on ensuring impact — but I still find it a useful tool. As such, I figured I should practice what I preach and develop a business model canvas. Diego Fernandez of Impact Hub has provided input into its development and now I am sharing it with all of you. If anyone feels up to converting it to a Google Doc and sharing and editing with the community, I am totally open to that. 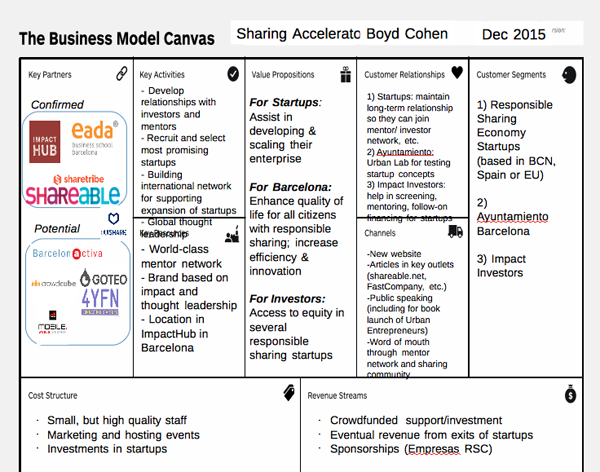 It is important to note that I separated out partners with those in the committed category who have already made at a minimum, a verbal, if not written, partnership commitment. The others are aspirational on my part but, if they are listed, it is because I have at least initiated contact with them.

I mentioned in the first post that I have been encouraging my entrepreneurship students at EADA Business School in Barcelona to embrace the P2P economy. Six of the 12 teams are pursuing these projects, and a few are quite interesting and may be eligible for consideration in the accelerator. As such, I decided to start mobilizing the mentor network and also simulate an accelerator “Demo Day” with my student teams as they are going to pitching their final startup projects. Impact Hub Barcelona generously offered their space for this event which was held on December 16. We had a packed house of about 80 people for this four-hour event.

If you are interested, here are summaries of the six sharing economy startups who participated.

Rental Buddy: A peer-to-peer platform in which users (tourists and students) contact owners who are willing to rent their under-utilized sports equipment for a short-period of time.

What's Cooking?: A platform (web and app) that allows cooks to share their dining table with people interested in a unique social dining experience.

€asy £xchange: This P2P currency exchange is a platform that connects people that would like to exchange currency without having to pay the high fees and long lines that are offered by the traditional brick and mortar currency exchange businesses.

Pet Away: A P2P platform to facilitate leaving a favorite pet with responsible homeowners nearby when traveling. "Airbnb for your dog"

Challenges ahead and how the Shareable community can help?

Finding the right impact investors or other sources of funding

Where do I start? I certainly need to work hard to find the right impact investors who share our vision toward growing responsible sharing economy startups who work with, and not against, local and regional governments. This includes determining the right investment vehicle and the best investment model and stakes sought in the participating startups.

Support in co-creating a screen for responsible sharing economy startups

Perhaps equally as challenging is determining the screening criteria for entry into the accelerator. The criteria for assessing the quality of the team and viability of their solution is pretty well-known, although it is not an exact science. But what is less obvious is the list of minimum criteria to ensure the startup is committed to a responsible approach to their P2P opportunity. I have some ideas on this regarding ownership structure, commitment to working with cities, possible commitment to open impact (i.e. offering some value to the commons), etc. I have even thought of adapting some of B Corporation principles, etc. Would love to hear your thoughts on this one!

While we are not planning to announce a call for applications to the accelerator for a few months, I would love to start generating a list of potential startups for consideration in Round 1. I suspect many Shareable readers are either potential applicants or know of startups who would be a good fit for the accelerator. If so, please let me know! Again, you can reach me here.