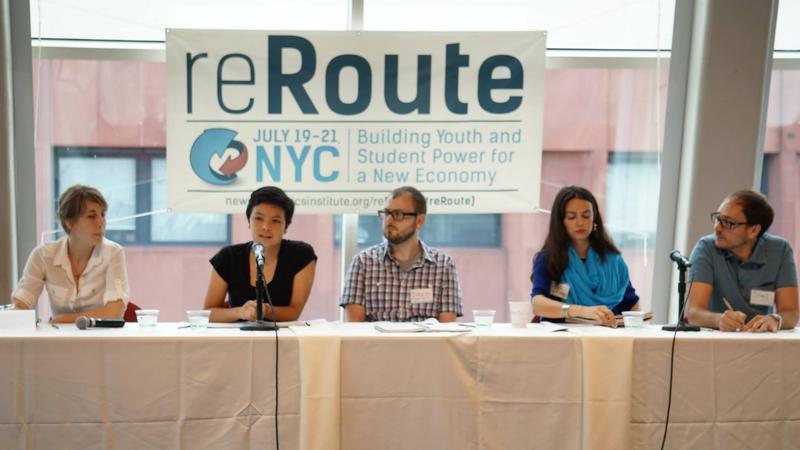 Earlier this month, I participated in a three-day convergence of young people passionate about building a just and sustainable economy. Organized by the New Economics Institute (NEI), this convergence – reRoute: Building Youth and Student Power for a New Economy —  brought together 300 students and young people from across the US and Canada to engage, become empowered, and explore new economy strategies for social change.

Although I had recently joined NEI as a communications intern, I was still very new to the “new economy movement.” Frankly, I didn’t know what to expect. After three days of workshops, panels, walking tours, and relationship building, I can decidedly say that I left New York super-charged to go home and get to work. I wasn’t the only one. One participant Amy Kirshner from Vermont described the atmosphere of the conference: “The depth of knowledge and feeling of empowerment that young people have at this moment, compared to the past, is remarkable and inspiring.” Ian Tran of Dearborn, MI summarized the theme that carried strong through the weekend: “Another economics is more than possible, it's already happening!”

Videos, pictures, and a running stream of tweets from the conference are on the New Economics Institute’s website. If you’re interested in diving in, go check it out! 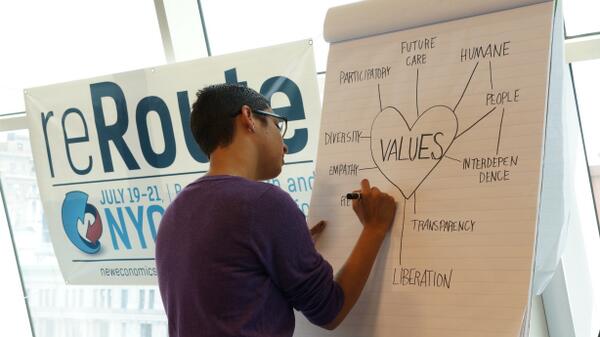 What are the values of the new economy? Workshop facilitated by: Kiran of AORTA Collective. July 20th, NYC Photo Credit: Rene Perez 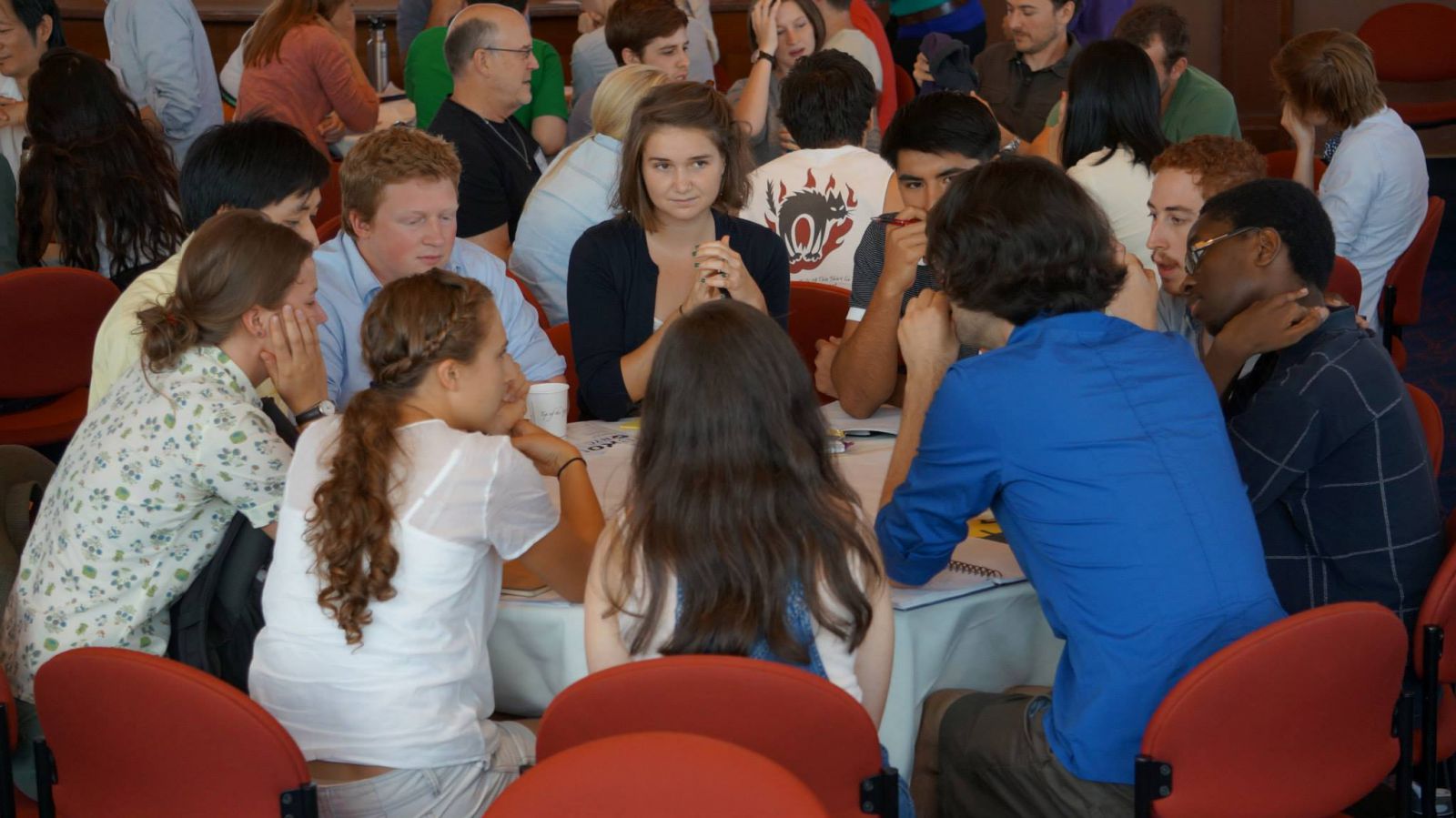 My first day of reRoute began by participating in a Solidarity Economy Walking Tour. Despite unbearable heat, attendees braved the sweltering city streets for four hours to learn about cooperative projects in NYC. To me, this set the tone for the entire weekend. The tour, led by Evan Casper-Futterman, a member of Solidarity NYC,visited 3B Brooklyn, OWS Screen Printing, Occucopy, 596 Acres, Park Slope Food Coopand The Commons Brooklyn. Each stop on the tour helped shaped participants’ idea of what’s possible in the new economy. 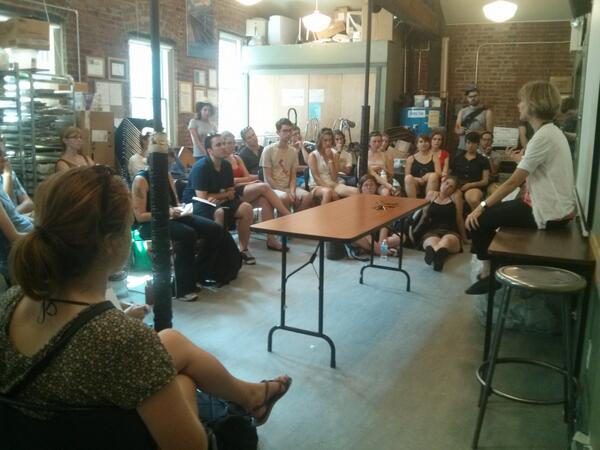 Park Slope Food Coop is not only a grocery store but a place to build relationships and community. July 19th, 2013 Photo By: Shayna Gladstone

Friday evening, everyone met back at NYU for the first panel discussion of the weekend called Pathways to a New Economy. The panelists included Alexa Bradley of On the Commons, Maliha Safri of the US Solidarity Economy Network,and Ed Whitfield with Fund for Democratic Communities. The panel featured one of the highlights of the entire weekend, when Ed Whitfield challenged the “teach a man to fish” parable, calling it a “mean-spirited lie” that fails to account for the importance of who owns the fishing poles or water holes. The moment was captured on video here.  To close out the night, Kiran and Jenna from The AORTA Collectivedug deep into framing questions for the new economy. 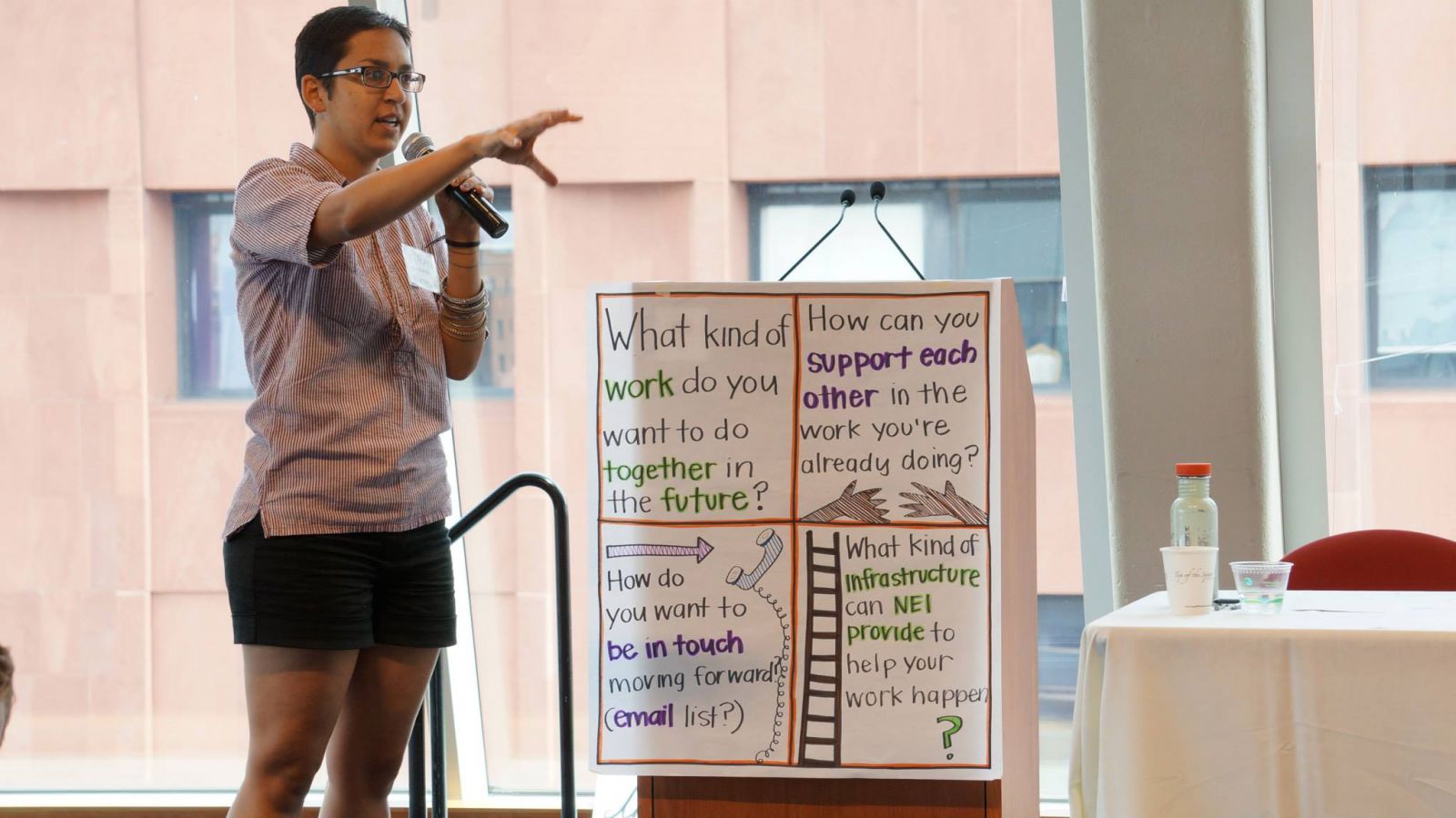 Day two opened up with three panel simultaneous discussions. I attended one called Financing a New Economy, which examined a variety of exciting strategies that are being employed to re-imagine finance and to re-direct capital toward democratic, equitable, and ecologically regenerative development. I was surprised to learn how useful new banking structures can be for strengthening communities. This panel which featured representatives from The Working World,  Responsible Endowments Coalition,  New Economy Project, Public Banking Coalitionand Public Banking Institutecan be viewed on YouTube. 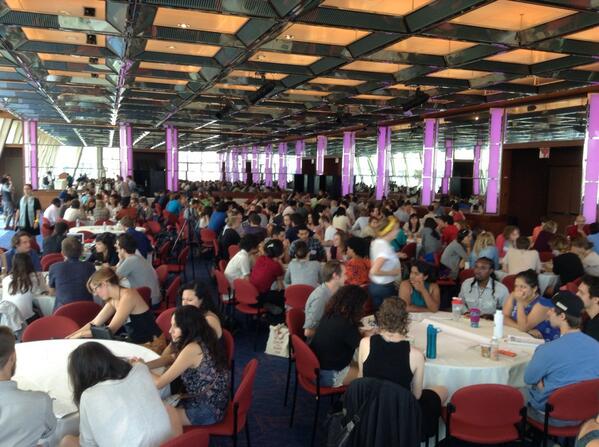 There were many choices on day three of reRoute including workshops on participatory budgeting, creator culture, and divestment. I chose to attend From Consumer Culture to Creator Culture. This inspiring workshop taught by Adam Horowitz of The Future Projectempowered attendees to use song, dance, and performing arts to create a vision of the new economy. In another workshop, young adults took a crack at participatory budgeting. Look what got funded: 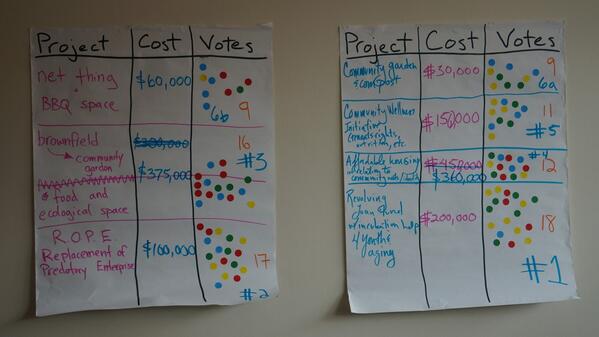 Eli Feghali, one of the event’s organizers, hopes that “reRoute was a catalyst for relationship building and engagement around powerful ideas to build an economy that prioritizes people and the planet instead of the blind pursuit of profit.” He hopes that the weekend has enabled students to take the concepts and new connections from the conference and implement projects at their campus. 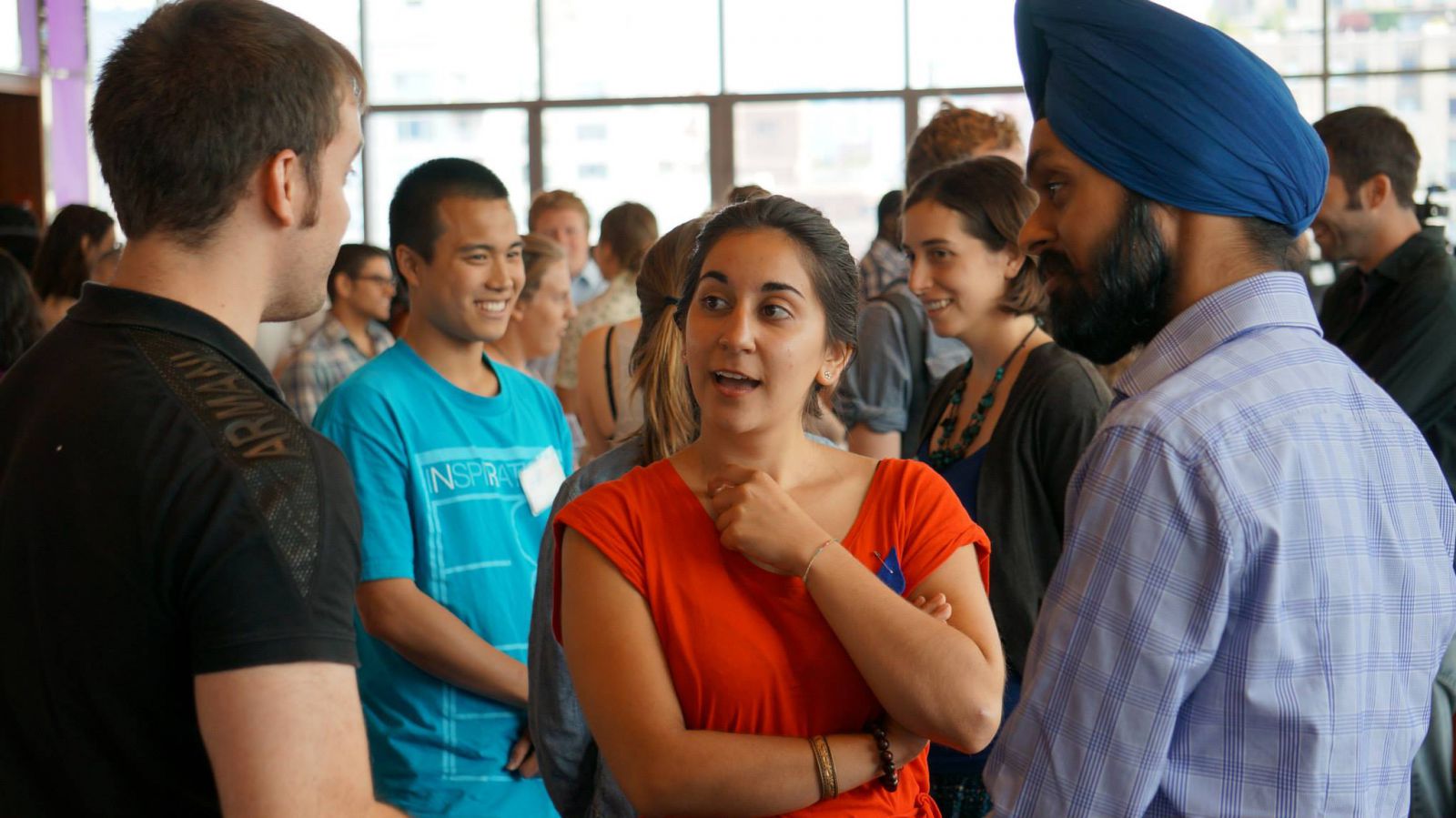 Participants dug deep, many tools were harvested, projects were pollinated, and participants walked away inspired to continue their work on building a new economy. The drive and passion of the young people truly fueled the weekend. “reRoute exposed me to a multitude of new ideas and approaches, but it was the people that gave the weekend so much momentum and weight. I was deeply inspired by the breadth and depth of the projects and movements being started around the world by young people like myself,” said Sam Kellog of Portland, Oregon. reRoute strengthened an already powerful movement and paved new paths to the future – a future of abundance and harmony for people and planet.

What are the next steps for New Economics Institute? According to Eli: "Building on the momentum of reRoute, we are working with coalition partners from all across the US and Canada to organize what we're calling New Economy Week.” To be held October 12-18, 2012, New Economy Week will feature public-facing events, actions, reports and other projects designed to answer the question: 'what should our economy look like?' The goal is to increase the exposure and visibility of 'new economy' ideas. If you’re interested in getting involved, you can learn more here.

Chicago city slicker to California EcoVillage dweller, I'm motivated by building community and advocating sustainability online and offline. Free-lance eco-focused social media manager, educational event coordinator, fire-performer, gardener and social-bee, I strive to "Be the Change" through living and working alternatively.Ecotivity is my newly formed organization that strives to create a platform for EcoVillages, work-exchangers and groups who want to build EcoVillage's to share resources and thrive. Follow me on twitter @ShaynaGladstone Facebook www.facebook.com/Ecotivity

Things I share: My services, my living space, my working space, my food, my clothes and anything else I can have the opportunity to share!