New Economy Week: 7 Days of Action Toward a Just and Sustainable World - Shareable
Skip to content

The New Economy Coalition (a project of the New Economics Institute) is shining a spotlight on the emerging movement for a new economy with a week of action called New Economy Week. October 11-19th they will be highlighting events, actions, reports, works of art, and other projects across the United States and Canada. By making visible the thousands of things people are doing right now to build a new kind of economy, this event will inspire broader participation and catalyze a conversation for deep, systemic change.

All around the country, people are rolling up their sleeves and getting to work on building an economy that prioritizes people and the planet. From starting cooperative groceries, to implementing citywide participatory budgeting, to municipalizing energy companies, these democratic and decentralized wealth-building strategies are being embraced by communities as a means of systemic transformation. While our political system proves itself incapable of dealing with complex problems, people are creating parallel institutions that meet their needs and lay a foundation for long-term social change. 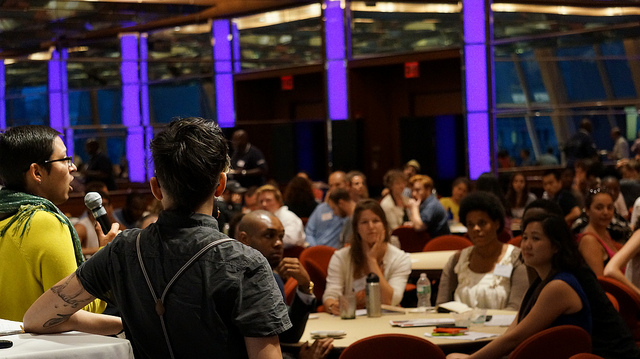 Right now there are over 40 events listed on the website and counting. Shareable's new Sharing Cities Network is hosting a Sharing Cities Mapping Jam to map the new economy in cities across the country that week. In Milwaukee, WI, the Riverwest Cooperative Alliance is throwing a Co-op Fest on October 12th to promote and educate the public about cooperatives. That same day, the Pennsylvania Public Bank Project is hosting a workshop in Philadelphia on public banking for the community and neighborhood leaders. Later in the week, in Montpelier, VT, Gus Speth will deliver a speech on “Measuring What Matters” that will be simulcast across the state. While representing only a sliver what’s happening in North America, these events demonstrate the breadth of strategies people are employing to transform our economy.

There’s still plenty of time to get involved. If you’re already hosting an event that falls within New Economy Week, go submit it on their website to get featured on the events page. Want inspiration for creating a new event? Check out their action toolkit and Shareable’s “How To Share” Guide for ideas about projects and events you can organize with your community. If you are outside the US or Canada, you can still host an event and next year hopefully organize a New Economy Week for your country.

Whether New Economy Week becomes an annual fixture (an Earth Day for the New Economy movement) remains to be seen. This year is very much an experiment. But if the momentum on the ground is any indication, New Economy Week – and all of the incredible work being done to build collective power and healthy communities – is just the beginning.