Spontaneous communities like the one that has emerged in the Madison, Wisconsin Capitol building are inspring for their commraderie and resourcefulness, but they're often bound to collide with existing rules. At the time of writing, the occupiers – protesting the governor's attempt to eliminate collective bargaining rights for public-sector unions – have avoided more than a handful of arrests. But some of the demonstrators may have more at risk than a minor trespassing charge. 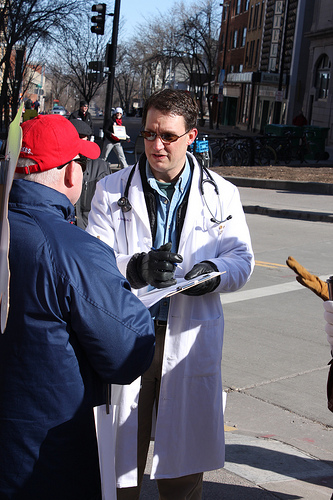 Some doctors stood on corners offering sick notes for workers who had called in ill as part of "sick-out" strikes. This struck me as a shocking inversion: doctors function more and more to keep people working. Getting the patient back to work – rather than the patient's enduring health – has become the central goal in much of general medicine. But these are doctors using this power as a tool to help public workers avoid work without consequences. It seems so counter to the role of medicine in U.S. society that it made me wonder: Isn't this against the law?

Well, maybe it's not illegal, but it looks to be an almost certain violation of a number of professional obligations. A few agencies have issued condemnatory statements and launched investigations, including the state licensing board, University of Wisonsin Health, and The Wisconsin Medical Society. Right-wing television has been playing clips of these doctors as "gotcha" footage about corrupt unions, but I see something more at work. The doctors I've seen interviewed explained that the stress public employees are under because of the attack on their collective bargaining rights is more than enough to earn a day off work. For Wisconsin doctors truly concerned about the health of their community, not only as individuals, handing out these notes seems like a conscientious if not by-the-book act.

So I put it to Shareable readers: did these doctors make the right call? Are they playing fast and loose with the medical ethics code and weakening public confidence in their vital profession? Or are they performing the job of medical professionals when they allow a community to gather in protest without risking their livelihoods?