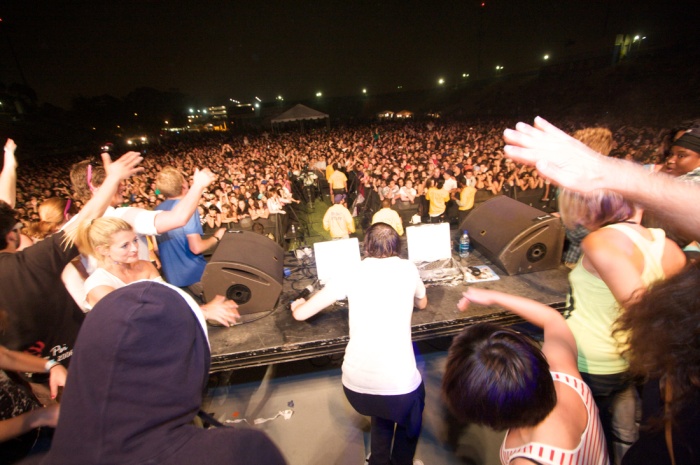 Popular music has always had an ambivalent relationship with American law and order, so it's unsurprising that the mash-up DJ Girl Talk has become a living example of what stringent intellectual property law makes impossible. His pop remixes have won international acclaim, heavy media coverage, and the full-throated support of some of the commons movement's greatest minds: Lawrence Lessig defends Girl Talk's music in his book Remix, and the DJ stars in the persuasive documentary RIP!: A Remix Manifesto. Girl Talk (whose legal name is Gregg Gillis) has continued his defiant sharing with his new album, All Day, which he released free to download on Monday.

All Day is Girl Talk's most ambitious project to date, consisting entirely of 372 overlapping samples of other peoples' songs and invoking artists from Peter Gabriel to Gucci Mane. Although it's available split into 12 individual tracks, All Day is meant to be listened to as a single song, running just over 70 minutes. What makes Girl Talk an ideal defendant for the commons movement, and perhaps what has protected him from prosecution, is that while his work is one big intellectual property crime, it clearly takes imagination and artistry. The IP doctrine of "fair use" generally protects artists who make transformative use of protected work, and the recording industry seems content to acknowledge through its silence that Girl Talk is up to more than piracy.

Musically, the album has its moments of brilliance. Faithful to the creator's instructions, I downloaded All Day as a single song and gave it a few solid listens and there are some combinations that really click. The album's opening, with the heavy guitar riffs of Black Sabbath's "War Pigs" stitched over Ludacris's road-rage classic "Move Bitch" is a head-banging joy. The most unexpected combinations are some of the best including Rihanna's bubble-gum "Rude Boy" on top of an angry Fugazi sample, and Foxy Brown's sibillant rap over Peter Gabriel's "In Your Eyes." But overall, All Day strikes me as a socially acceptable way for certain white sub-cultural groups to listen to popular hip-hop, albeit punitively deprived of the original beats. Which makes me feel pretty lousy about writing this post in the first place.

Wikipedia (a proper source considering) describes remix culture, arising from Lessig's work, as "a society which allows and encourages derivative works. Such a culture would be, by default, permissive of efforts to improve upon, change, integrate, or otherwise remix the work of copyright holders. Lessig presents this as a desirable ideal and argues, among other things, that the health, progress, and wealth creation of a culture is fundamentally tied to this participatory remix process." Rappers have sampled other artists and circulated their music for free since the art form's inception, unfortunately they're not all as lucky as Girl Talk when it comes to avoiding legal action. The rapper Pharoahe Monch, whose career was ruined for near a decade after he was sued for his genius sampling of the Godzilla theme in the song "Simon Says," doesn't get a mention in Remix.

Remix culture isn't some technical evolution of the informal mixtape society; any music critic will tell you the best contemporary hip-hop is posted online for free by the artists. What started rap's exclusion from traditional retail outlets, forcing the underground distribution of self-produced tapes, has grown into a lasting tech-culture, incorporating analog, cloud-computing, and everything in between. (For more background, MTV ran a feature report about mixtape production you can read here.) Rappers even make great use of social media, arranging collaborations and sharing support on Twitter. Why does remix culture, a recent and largely synthetic idea, get more coverage, attention, and defense than the enduring and organic mixtape culture? Remix culture as epitomized by its DJ poster-boy serves as a whitewashed screen for a mixtape culture whose obscenity, violence, and blackness some academics and activists could not defend without blushing.

The obvious answer is race. Mash-up DJs tend to be whiter than mixtape rappers, and it could be that the poster boy for a para-academic intellectual property movement has to be, in the minds of those in charge, a certain color. Literally no one will accuse the white Girl Talk of violence, misogyny, promoting drug use or obscenity, even though he remixes black artists who have been charged with all of the above. But there are other issues as well, All Day is Girl Talk's first album under a Creative Commons license, which must make that organization and its proponents feel quite hip. On the other side of the tracks, even the hottest mixtapes are hosted on sketchy ad-ridden download sites without a reference to there being any property rights to protect or disavow. But despite the integral role the cultural commons plays in hip-hop, the purveyors of remix culture are more interested in a single commercially successful mash-up artist than say, the Odd Future Wolf Gang, a collective of L.A. teenagers who produce their own music, videos, and album art, and release it all for free – on Tumblr.

Odd Future (or OFWGKTA (Odd Future Wolf Gang Kill Them All) as they're acronymically known) illustrates the blind spot of para-academic defenses of the cultural commons. These teenagers are incredibly talented, taking advantage of any and all social media they can get there hands on, and releasing an astounding amount of quality material in the last few months. The strategy has begun to pay off, OFWGKTA even got a mention in Sasha Frere-Jones's white-approved New Yorker music column. However, the violent nihilism that characterizes their music and art doesn't mesh with the fun and sterile picture of remix culture we're usually given. I can hardly imagine any Harvard IP theorist lionizing a group of skateboarding black teenagers whose chief slogan is "Fuck you!" 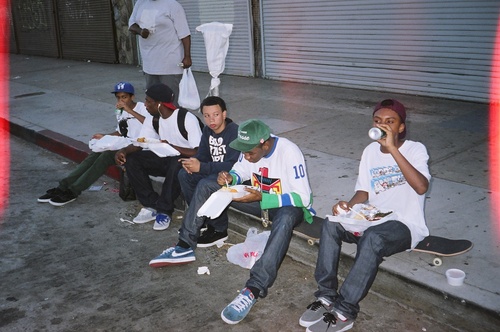 Part of Odd Future (photo from Wolf Gang photographers Vyron Turner, Wolf Haley And Taco Bennett under the license "If You Take A Fucking Photo, Please Give Us Credit")

I started to write a bland post about Girl Talk's new release and how ground-breaking it is that he puts sampled work online for free, an actually existing example of the cultural commons at work, etc. But I realized that most of the music I listen to has samples and is free online, and this is music that I enjoy a lot more than mashed-up pop songs, put out by a community based in collaboration and sharing. If we're looking for models of common production and resource sharing, art is a good place to start. However, we would do well to search beyond the established artist with millions of fans and institutional support, to the creative individuals who work as a community and share their work out of necessity. Consider this a promise to work on it.

For some free mixtapes, start (but don't stop!) with the relatively well-known sites 2 Dope Boyz and DatPiff

OFWGKTA has a 21st century web presence, they have a collective Tumblr/site, a visual art Tumblr, a third Tumblr of their fan art, and you can follow the group on Twitter

Sampling as an element of hip-hop gets more attention than the mixtape within the commons community, Kembrew McLeod's book Freedom of Expression (available as a free .pdf here) is a good example

Correction: An earlier version of this article misspelled the name of the band Black Sabbath "Led Zeppelin." The author is properly ashamed.