Q&A: Yochai Benkler on the Benefits of an Open Source Economic System - Shareable
Skip to content 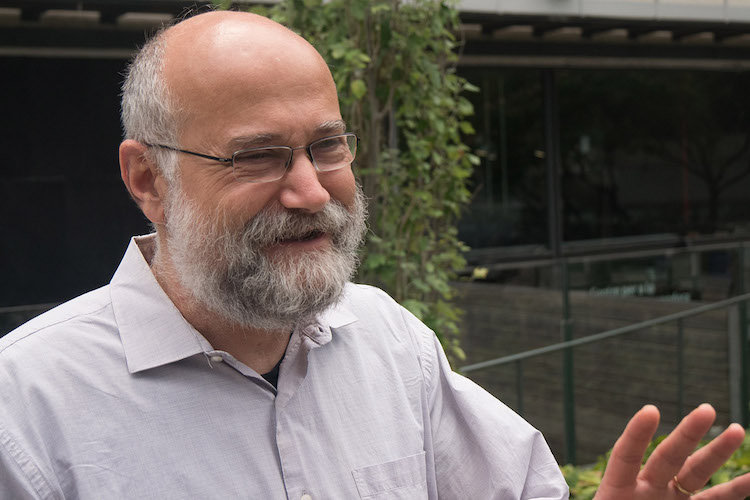 After the breakthrough of the internet, Yochai Benkler, a law professor at Harvard University, quickly understood that new online forms of collaboration such as Wikipedia or Linux responded to a completely new economic logic. Specializing in the digital culture of the networked society, Benkler worked on a coherent economic vision that guides us beyond the old opposition between state and markets.

According to Benkler, we may be at the beginning of a global cultural revolution that can bring about massive disruption. "Private property, patents, and the free market are not the only ways to organize a society efficiently, as the neoliberal ideology wants us to believe," Benkler says. "The commons offers us the most coherent alternative today to the dead end of the last 40 years of neoliberalism."

Yochai Benkler, law professor at Harvard University: Both sides in this discussion start from an assumption that is generally accepted but fundamentally wrong, namely that people are rational beings who pursue their own interests. Our entire economic model is based on this outdated view on humanity that goes back to the ideas of Thomas Hobbes and Adam Smith, philosophers from the 17th and 18th centuries. My position is that we have to review our entire economic system from top to bottom and rewrite it according to new rules. Research of the past decades in social sciences, biology, anthropology, genetics, and psychology shows that people tend to collaborate much more than we have assumed for a long time. So it comes down to designing systems that bring out these human values.

Many existing social and economic systems — hierarchical company structures, but also many educational systems and legal systems — start from this very negative image of man. To motivate people, they use mechanisms of control, by incorporating incentives that punish or reward. However, people feel much more motivated when they live in a system based on compromise, with a clear communication culture and where people work towards shared objectives. In other words, organizations that know how to stimulate our feelings of generosity and cooperation, are much more efficient than organizations that assume that we are only driven by self-interest.

This can work within a company or an organization, but how can you apply that to the macro economy?

Over the past decade, the internet has seen new forms of creative production that hasn't been driven by a market nor organized by the state. Open-source software such as Linux, the online encyclopedia Wikipedia, the Creative Commons licenses, various social media, and numerous online forms of cooperation have created a new culture of cooperation that ten years ago would have been considered impossible by most. They are not a marginal phenomenon, but they are the avant-garde of new social and economic tendencies. It is a new form of production that is not based on private property and patents, but on loose and voluntary cooperation between individuals who are connected worldwide. It is a form of the commons adapted to the 21st century — it is the digital commons.

What is so revolutionary about it?

Just take the example of the Creative Commons license: It is a license that allows knowledge and information to be shared under certain conditions without the author having to be paid for it. It is a very flexible system that considers knowledge as a commons, that others can use and build on. This is a fundamentally different approach than the philosophy behind private copyrights. It proves that collective management of knowledge and information is not only possible, but that it is also more efficient and leads to much more creativity than when it is "locked up" in private licenses.

In the discussion whether the economy should be organized by the state or by the markets, certainly after the fall of communism, there was a widespread belief that models starting from a collective organization necessarily led to inefficiency and tragedy, because everyone would just save their own skin. This analysis has been the responsibility for the deregulation and privatization of the economy since then, the consequences of which have been known since 2008.

The new culture of global cooperation opens up a whole new window of possibilities. The commons offer us today a coherent alternative to the neoliberal ideology, which proves to be a dead end. After all, how far can privatization go? Trump and Brexit prove where it leads to.

The commons is a model for collective management, which is mainly associated with natural resources. How can this be applied to the extremely complex modern economy?

The commons are centuries old, but as an intellectual tradition it was mainly substantiated and deepened by Elinor Ostrom, winner of the Nobel Prize in Economics. Over the past decades the commons have gained a new dimension through the movement of open source software and the whole culture of the Digital Commons. Ostrom demonstrated on the basis of hundreds of studies that citizens can come together to manage their infrastructures and resources, often in agreement with the government, in a way that is both sustainable ecologically and economically. Commons are capable of integrating the diversity, knowledge, and wealth of the local community into the decision-making processes. They take into account the complexity of human motivations and commitments, while market logic reduces everything to a price, and is insensitive to values, or to motivations that are not inspired by profit. Ostrom showed that the commons management model is superior in terms of efficiency and sustainability to models that fall back on a strong government — read: socialism or communism, or on markets and their price mechanism.

Examples of commons in the modern economy include the management model of the Wi-Fi spectrum, for example, in addition to the previously mentioned digital commons. Unlike the FM-AM radio frequencies that require user licenses, everyone is free to use the Wi-Fi spectrum, respecting certain rules, and place a router anywhere. This openness and flexibility is unusual in the telecommunications sector. It has made Wi-Fi an indispensable technology in the most advanced sectors of the economy, such as hospitals, logistics centers, or smart electricity grids.

In the academic, cultural, musical, and information world knowledge or information is increasingly treated as a commons, and freely shared. Musicians no longer derive their income from the copyright of music, but from concerts. Academic and non-fiction authors publish their works more often under Creative Commons licenses because they earn their living by teaching, consultancy, or through research funds. A similar shift also takes place in journalism.

An essential feature of the commons management model is that all members of the "common" have access to the "use" of goods or services, and that it is jointly agreed how access to those goods and services is organized. Market logic has a completely different starting point. Does this mean that markets and commons are not compatible?

Commons are the basis of every economic system. Without open access to knowledge and information, to roads, to public spaces in the cities, to public services and to communication, a society can not be organized. The markets also depend on open access to the commons to be able to exist, even though they try again and again to privatize the commons. There is a fundamental misconception about the commons. It is the essential building block of every open society. But commons and markets can coexist.

If today it is mainstream to think that a company should maximize its financial returns in order to maximize it shareholder value, it isn't a fact of nature, it's a product of 40 years of neoliberal politics and law intended to serve a very narrow part of the society. Wikipedia shows that people have very diverse motivations to voluntarily contribute to this global common good that creates value for the entire world community. The examples of the digital commons can inspire to set up similar projects in real economy, as happens with various digital platforms in the emerging collaborative economy.

A society that puts the commons at the center, recognizing the importance of protecting them and contributing to them, allows different economic forms of organization to co-exist, both commons and market logic, private and public, profit-oriented and non-profit-making. In this mixture, it is possible that the economy as a whole is oriented towards being socially embedded, being about the people who generate the economic activities, and who can have very different motivations and commitments. The belief that the economy would be driven by an abstract ideal of profit-oriented markets is no more than a construction of neoliberal ideology.

You seem very optimistic about the future of the commons?

I was more optimistic ten years ago than I am today. The commons are so central to the organization of a diverse economy that they must be expanded and protected in as many sectors of the economy as possible. There are many inspiring examples of self-organization according to the commons model, but it is clear that their growth will not happen automatically. Political choices will have to be made to restructure the economy beyond market logic. Regulation is necessary, with a resolute attitude towards economic concentration, and with a supportive legislative framework for commons, cooperatives and various cooperation models.

At the same time, more people need to make money with business models that build on a commons logic. The movement around "platform cooperativism" is a very interesting evolution. It develops new models of cooperatives that operate through digital platforms and that work together in global networks. They offer a counterweight to the business models of digital platforms such as Uber and Airbnb, which apply the market logic to the digital economy.

This brings us to the complex debate about future of work.

In the context of increasing automation, there is a need for a broader discussion that can see "money" and "work" as separate from each other, because the motivations to "work" can be very diverse. A general basic income is an opportunity to build a more flexible system that makes these various motivations possible, but also a shorter working week is an option.

We are facing an enormous task and we do not have a detailed manual that shows us the way. However, the current economic crisis and the declining acceptance of austerity means that the circumstances are favorable to experiment with new forms of organization.

When Wikipedia began to grow, it was told that it "only works in practice, because in theory it's a total mess." I believe, however, that today we have a theoretical framework that allows us to build a better life together without subjecting ourselves to the same framework that gave us oligarchic capitalism. The commons is the only genuine alternative today that allows us to build a truly participatory economic production system. The commons can cause a global cultural revolution.

This piece has been edited for length and clarity. Header image of Yochai Benkler by Bart Grugeon Plana

Bart is an investigative journalist. He writes for the Barcelona-based newspaper La Directa and for several other news sites, such as apache.be or mo.be. He covers general social, economic and

Bart is an investigative journalist. He writes for the Barcelona-based newspaper La Directa and for several other news sites, such as apache.be or mo.be. He covers general social, economic and cultural news, and is interested in sustainable ways of living, working and producing, based on collaboration instead of competition. You can read more of his articles on www.contributing2commons.org