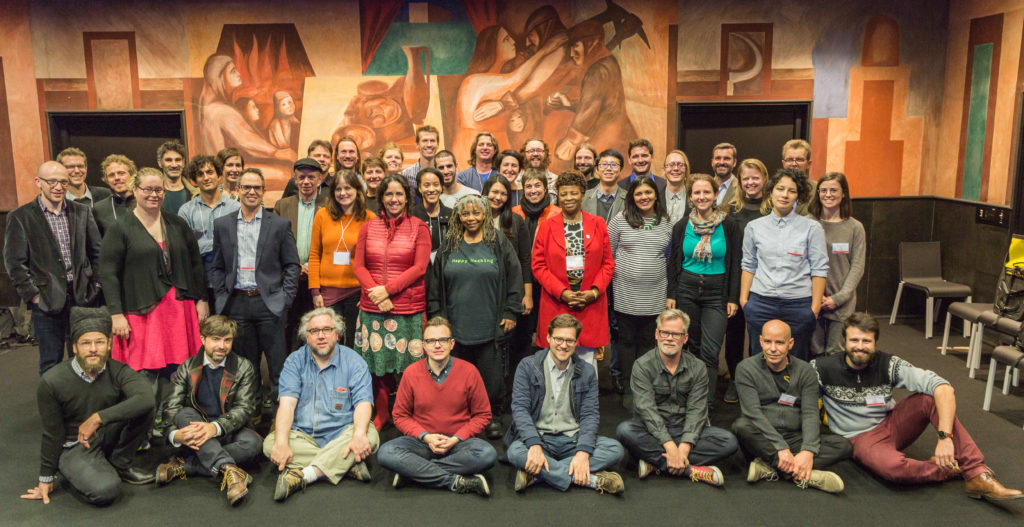 The second platform cooperativism conference, Building the Cooperative Internet (videos here), was held at the New School and Civic Hall in New York City on November 11-13. Platform cooperativism is a movement for the democratic ownership and collective governance of the Internet platforms grounded in principles of worker solidarity. The inaugural conference in 2015, which over 1,000 people attended, was billed as a “coming out party for the cooperative Internet.” This year’s follow-up was a smaller (though with 2,000 livestream viewers), action-orientated event to implement the shift to a cooperative internet, which included the launch of the Platform Cooperativism Consortium to support the movement going forward.

Event convener Trebor Scholz opened proceedings by talking about how platform cooperativism provides an alternative to the extractive on-demand economy dominated by platforms like Uber which millions of people increasingly depend upon for their livelihoods, but “which are owned by a group so small you could fit them all on a Google bus.” 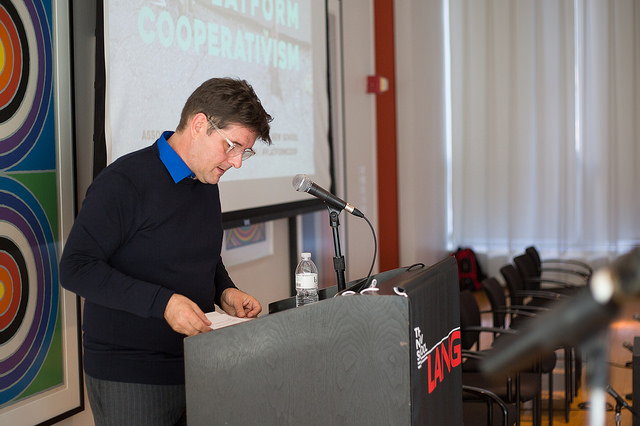 Day one showcased an international group of practitioners and policymakers to discuss regulation, investment, legal, and design implications of the cooperative internet. Kristy Milland, community manager of TurkerNation.com, spoke passionately of the precarious conditions faced by crowd workers on Mechanical Turk who perform “human intelligence tasks” that can't be done by computer. The work pays little and is physically and mentally taxing. It can include processing images of extreme violence and porn, which can result in trauma. Mechanical Turkers can't talk to each other or requestors on the platform, but are banding together on forums like Turker Nation to support each other and demand better conditions. Kristy hopes to launch an ethical version of Mechanical Turk to overcome the isolation and powerlessness experienced by many digital laborers. 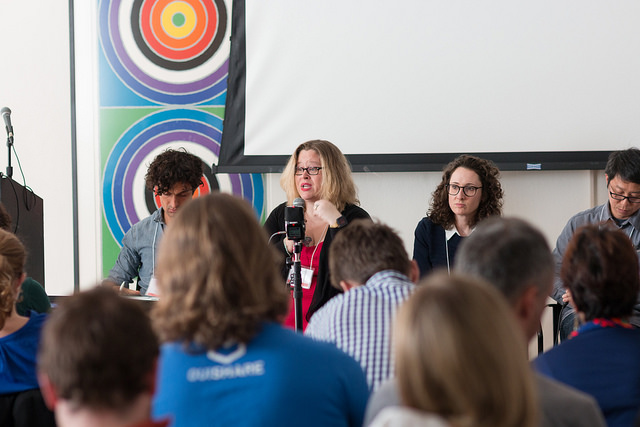 The afternoon session on how to build platform co-ops featured presentations on free software, lean product development, and community-centered design. Una Lee, founder of design studio, And Also Too, spoke about her design work with communities that advance social justice. Una facilitates the Design Justice Network, which aims to connect design practitioners with people who have been historically marginalized by design and center them in the creation of platforms, objects, and systems they rely on.

Douglas Rushkoff closed day one with a talk that boiled down to a question — what if Donald Trump’s election represented an opportunity for platform cooperativism? After all, platform cooperatives support workers and local economies, a position not far off from Trump’s pro-worker and anti-trade rhetoric. Rushkoff also offered a media analysis of the election and our historical moment. Rushkoff reflected on the media bias of the net, how it enabled the Arab Spring and Occupy Wall Street, which is great for disrupting the establishment, but so far terrible at building an alternative. He suggested that the Democratic Party has become a platform monopoly where "true participation in the party was about as real as participation in Facebook." According to Rushkoff, we are transitioning from a TV media environment to a digital media environment. The TV media environment was globalist in nature and epitomized by a global public imaginary. On the other hand, the digital media environment is discrete and dominated by a binary logic of yes or no, up or down. Trump is a digital media candidate: "let's build a wall, let's divide the lines." The other digital bias is memory, as in the random access memory (RAM) of a PC or server: "let's make America great again." Rushkoff ended with a provocative thought experiment: what if instead of protesting Trump’s victory, progressives applied for positions in the new administration? Rushkoff's suggestion that Trump's victory could be an opportunity for platform cooperativism was met with skepticism if not rejection, though it did spark a lively debate.

Later that night, Trebor Scholz officially launched the Platform Cooperativism Consortium (PCC), a global network of researchers, platform co-op enterprises, independent software developers, artists, designers, lawyers, activists, publishing outlets, and funders. The ceremony was held in the Orozco Room at the New School, which houses rare frescos depicting worker struggles completed by the Mexican public art muralist José Clemente Orozco (1883-1949) in 1931. The PCC supports the cooperative platform economy through research, experimentation, education, advocacy, documentation of best practices, technical support, the coordination of funding, and events. Built upon the concept of platform cooperativism, the consortium is anchored in collective ownership, democratic governance, and a decisive commitment to the global commons, inventive unions, social justice, as well as ecological and social sustainability. You can check out the collaboratively written founding documents here to learn more about the purpose and function of the consortium. 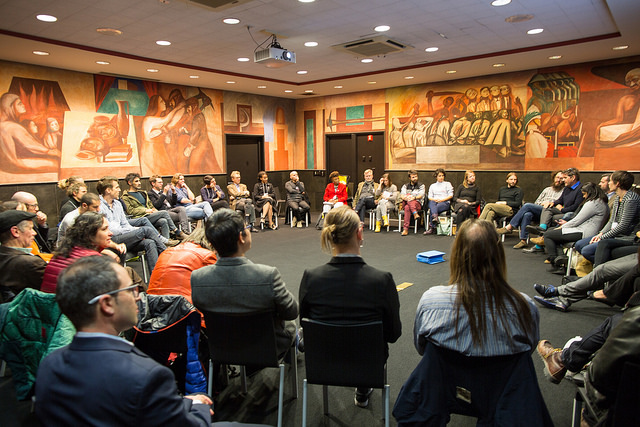 Day two discussions focused on global opportunities for convergence among worker resistance movements, unions, and cooperatives. Discussion focus on the question, how can online co-ops help workers and the labor movement cope with or build their own platform economy? Yochai Benkler opened day two on an optimistic note, “One of our major hopes is that there’s significant ability to do things below the level of national government.” Benkler characterized Brexit and Trump’s election as victories for xenophobic economic nationalism in rejection of globalism, free trade and cosmopolitanism. Benkler paints platform cooperativism as a form of “network pragmatism” at the vanguard of the next economic paradigm, what Benkler calls the “open social economy” where ethical commitment shapes technological deployment. Benkler continued, “History suggests that cooperatives can be sustainable where accepted and will neither kill or be killed by investor-owned firms. Slack in markets offers ample room for ethical, socially-embedded markets.” Benkler ended with a discussion on the commons, which he argued offers an opportunity to organize the economy through cooperative models built on diversity and polycentricism.

This was followed by a panel on the union co-op model panel moderated by Trebor Scholz. It brought together cooperatives, unions and worker associations with representatives from the National Domestic Workers Alliance, the AFL-CIO, Teamsters, SMart, 1worker1vote.org and the United Services Union (ver.di) in Berlin. Unions have steadily declined over the last few decades, but have at least one new and important role to play by helping workers to form cooperatives, representing members of union-formed cooperatives in government, and creating a healthy cooperative ecosystem where cooperatives collaborate and share resources. There was also a strong call from multiple panelists to embrace a diversity of strategies for supporting workers.

Evgeny Morozov opened the following panel on cities by talking about how the sharing economy, as popularly known, epitomizes five characteristics of late capitalism and is at the vanguard of the latest wave of capitalist adaptation. The first of these is globalization where low-cost labor settings improve profitability. The second is financialization where firms create new financial instruments and abstractions to boost profits. The third is flexibilization which shifts labor-related risks and costs from employer to employee. The fourth is monopolization — an increasing tolerance of monopolies due to changes in anti-trust law and acceptance of market fundamentalism. The final characteristic is informationalization where data is commoditized and leveraged for ever-increasing market power. Morozov applied this analytical framing to platform cooperativism by concluding that "if we want to talk about the -ism, we have to deliver on the economics and the politics." Shareable co-founder Neal Gorenflo followed with a talk about the need to collaborate on policy at the local level and create an effective policy exchange to support platform cooperatives and the commons in general in cities around the world. A highlight of the panel were Mayo Fuster Morell and Francesca Bria of Barcelona whose talks taken together offered an inspiring vision of "rebel cities" powered by citizens, the commons, sustainability, and feminist values. Their vision comes out of their pioneering commons-based technology policy work with Barcelona's city council and mayor Ad Colau.

One of the sessions I attended was on public sector partnerships convened by Becky Michelson from Engagement Lab at Emerson College in Boston. Participants brainstormed key challenges and opportunities for city engagement in platform cooperativism. The group split into two topic groups for a deeper dive into how to build the research evidence base for city partnerships and practical questions related to city procurement of services. The policy group I participated in with Annette Mühlberg from United Services Union (ver.di) in Berlin discussed how to shift the narrative in city government to better serve the public good via support for platform cooperatives, social enterprises and responsible sharing startups. 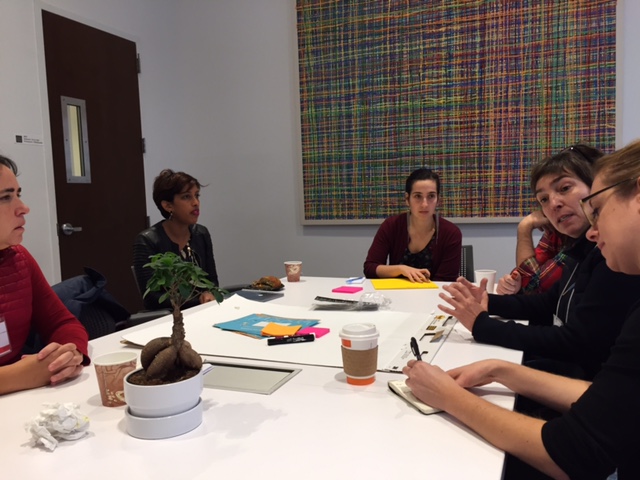 The second platform cooperativism conference signaled a clear shift from the movement building of 2015's event towards much deeper engagement by mature actors concerned with practical questions of appropriate co-operative business models, financing, design and legal considerations, and partnerships with unions and city governments for greater scale and impact. The launch of the Platform Cooperativism Consortium and follow up events planned for the UK, Canada and Australia in 2017 will help to advance the case for the cooperative platform economy globally.