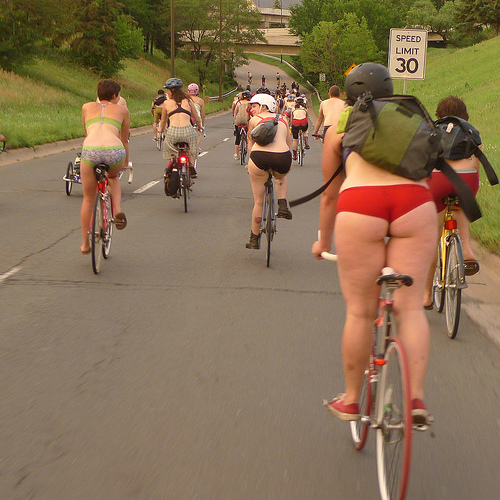 On the 4th of July my wife Julie and I were biking through downtown Minneapolis to see fireworks at the Mississippi River when someone shouted at us: “Take your clothes off.” We weren’t sure whether to be offended or flattered, until realizing we had pedaled into the midst of a naked bicycle ride.

Well not quite naked, but several hundred people on bikes were approaching us in their underwear—skimpy underwear without a stitch of lycra. They were having a great time on a still-85 degree summer evening.  And so was everyone watching them.

It was a welcome bit of fun in a downcast holiday weekend here in Minnesota. Right now, the state government is shut down because of a political budget battle, which means that many public services on which people depend are closed. That includes state parks and construction projects on state highways, which explains why more people than usual were in town to watch fireworks and near-naked bike riders.

It’s a similar story all across the country as Americans struggle with unemployment, rising gas prices, and steep cuts in vital services. The boom in biking that’s happening coast-to-coast offers at least one bright spot amid all the gloomy news.

People on bikes save money, save gas, save the environment and make fewer demands on the public treasury than motorists. A mile of new urban highway costs $46-100 million, according to former House of Representative Transportation chairman Jim Oberstar, while a mile of 12-foot-wide bikeway costs $125,000.

In fact, you could say the hundreds of bicyclists wheeling through Minneapolis on the 4th—both those in underwear and everyone else—were exhibiting their patriotism.

So how do we get more Americans to bike? The biggest obstacle right now is that people see bicyclists as an exotic species—macho, ultra-fit, almost entirely young, white and male, clad in lycra or spandex, who ride like madmen all over city streets. Some of us admire them, some revile them, but most people can’t imagine joining their ranks.

Yet, the reality is that most bikers today are ordinary people: office workers commuting, schoolkids going to piano practice or a soccer game, moms with a trailer on the back, grandparents getting exercise. We simply remember the daredevil bike messengers and wanna-be Lance Armstrongs in racing gear more vividly.

To counter this image, organizations such as People for Bikes, the Rails to Trails Conservancy, the League of American Bicyclists, 8-80 Cities and others are initiating efforts to widen biking’s appeal to women (see another New York Times story yesterday), kids, families, middle-agers, seniors, African-Americans, Latinos, immigrants, suburban- and rural-dwellers, everyone.

The best way to do this is making biking safer and more convenient for everyone. This involves creating more bike lanes, off-street paths, recreational trails, and other facilities to make new riders feel comfortable on the road.

Between 7 and 10 percent of Americans feel at ease biking regularly under current road conditions, which generally means city streets or bike lanes set apart from speeding cars by white lines painted on the pavement. That roughly equals the percentage of people who bike daily in Portland, Oregon, which has the highest percentage of bike commuters among large American cities.

Portland is now reaching out to the 60 percent of people who report in surveys they would bike more frequently if they felt safer on the streets. City officials are creating cycle tracks (bikeways separated from moving traffic), bicycle boulevards (quiet residential streets were bikes and pedestrians are given certain advantages over cars) and a campaigns to show how easy it is to bike.

This is truly important work, and I am honored to chronicle these efforts in a wide variety of websites and publications, including Shareable. But at the same time, I hope bicycling keeps its image as a cool way to get around that excites the passions of young riders.

I believe the aspirations to make biking appeal to mainstream Americans and to make sure it retains a special, fun-loving spirit are compatible.

For several years I have been predicting that in the future of biking will be seen as  “utterly normal and incredibly sexy”.

By normal, I mean people don’t consider it weird for someone like them to do. By sexy, I don’t just mean Penelope Cruz and Brad Pitt. I mean it’s vital, healthy, refreshing–you look good using your muscles, you feel good with the wind in your face, you are happy, smiling, alive!

Even if you never strip down to your underwear for a ride.