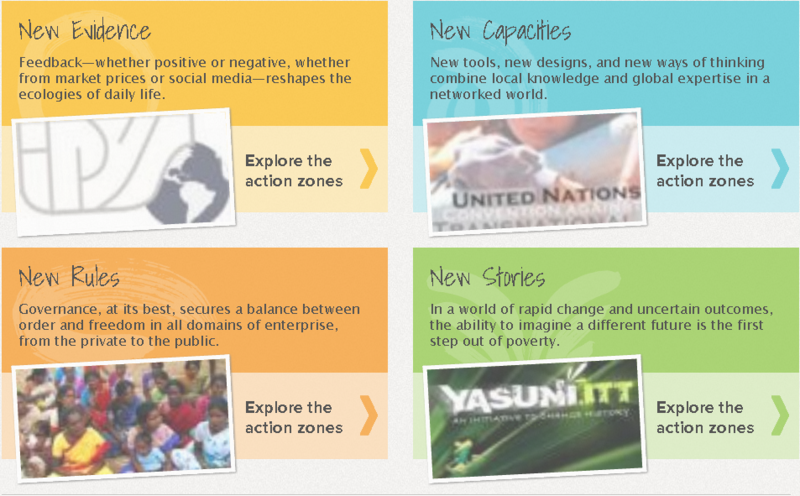 Today the Institute For The Future launched a new game with a social mission at its core. The Catalyze for Change game aims to find thousands of new pathways out of poverty — and they're looking for people like you to play — but it only lasts for 48 hours. The game seeks to catalyze new ideas, new actions, and new futures in communities around the world.

[image_2_big]The game website lists a number of innovations that already exist (such as SMS garbage complaints in Delhi, India; sack farming in Kibera, Kenya; free online textbooks in Bengladesh; and theater groups that engage women farmers in policy in East Africa). By playing the game you can suggest additional catalysts or build on other people's ideas.

The launch event in San Francisco included a panel discussion with Jane McGonigal, author of Reality is Broken and the creator of the Catalyze for Change game; Shannon Spanhake, San Francisco’s Deputy Innovation Officer; Mitch Kapur, founder of Lotus Notes and co-founder of the Electronic Frontier Foundation; and Dr. Judith Rodin, president of the Rockefeller Foundation.

[image_3_big]According to Jane McGonigal, the real purpose of games like Catalyze for Change is to stimulate creativity, which can then have real-world effects. In a prior game she created, an outlandish idea from South Africa was to make libraries more like McDonalds — spreading like a global fast-food chain virus. This idea led to start-up funding for a for-profit library franchise. During audience questions, a concern was raised that games may perpetuate market solutions which will not bring about solutions to historical inequality, but Jane clarified that this idea excited people because it didn't require waiting for development aid in order to proceed.

Mitch Kapur said that good technology can amplify effects and provide leverage and scale. But just because a technology applies to a positive area, such as education, doesn’t mean that it will necessarily have a good impact. The question is what is the technology for? So, a technology that helps with education that primarily gets purchased by affluent parents will only reinforce existing inequalities.

Shannon Spanhake explained that the common belief is that government is slow to develop, but the reality is that cities are large organizations often with large legacy technology systems (in San Francisco there are 7 email systems!). Cities’ biggest assets are their people and cities’ strongest capacity is their ability to convene. Whether you’re San Francisco or Chennai, her advice is for cities to figure out their strongest assets and make them converge so they can generate something bigger than the sum of their parts.

Everyone is invited to play the Catalyze for Change game during a 48 hour window from April 3-5. Join the game and be a catalyst for change at game.catalyze4change.org.