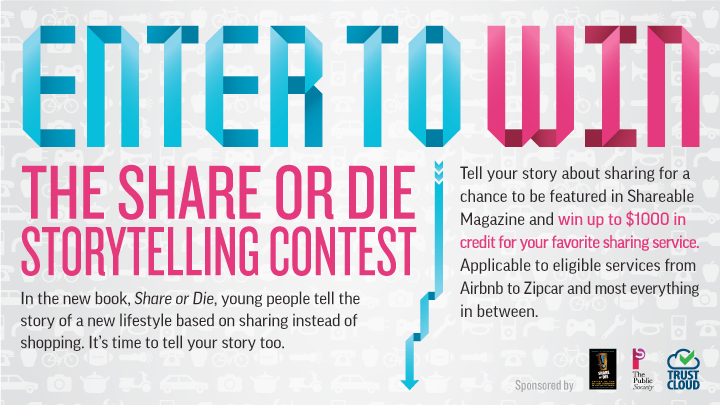 Team Shareable has been toiling away in our sharing skunkworks for months working out how to launch our new book, Share or Die, being brought out in paperback (plus Kindle & iPad) by New Society Publishers in just a few days.

Being us, we didn’t want to launch our book, well, in “the old way.” We asked ourselves, “How would Shareable bring a book about sharing into the world?” And, “How do we engage our community in an authentic way?”  And, “What would best serve the sharing movement?”

Those are a lot of questions and a high bar to meet. We finally landed on a contest that rewards well-told stories about sharing (enter the contest here), which isn’t a perfect solution. In fact, there’s some contradictions right off the bat (a contest about sharing?).

We realized, however, that we have an intelligent audience that’s comfortable with contradiction and nuance. And that a storytelling contest fit the bill because it’s a community storytelling effort that can catalyze a movement.

How can stories catalyze a movement?

Marshall Gantz, a Harvard sociology professor, believes that when individuals tell stories about what calls them to change, it’s a first step in creating a new shared narrative about what’s possible. This can bind people together for collective action.

This kind of storytelling is also a first step in becoming a leader. In Gantz’s words, “you have to claim authorship of your story and learn to tell it to others so they can understand the values that move you to act, because it might move them to act as well.”

Well, this may seem like a nice theory, but Gantz spent 16 years with Cesar Chavez organizing migrant farm workers. He became one of the world’s best community organizers. He worked another 10 years helping many unions, politicians, and nonprofits organize before going to Harvard to get his sociology doctorate.

You still might be skeptical. The idea that stories can change the world sounds implausible, even mystical. I would be skeptical too if something amazing didn’t happen to me 18 months ago.

How my experience convinced me of the power of stories.

In September of 2010, my friends at The Thought Leader Gathering advised me to start writing about how I share in my everyday life. They said it’s one of the most important things I could do to strengthen the sharing movement. Taking their advice, I started a blog in January 2011 called The Year of Living Shareably.

I was dead wrong.

After my third blog post in February of 2011, I got a call from Danielle Sachs of Fast Company. She wanted to do a feature about the sharing economy. She wanted my help understanding it. And she told me point blank that she needed me, as an example of a sharer, to open the story.

Fast Company published a major feature about sharing in April 2011. The story opens with a day in the life of a sharer, my life that is. An almost overwhelming amount of attention followed. That story lead to major stories in NBC Nightly News, Sunset Magazine, and 7×7 Magazine, just to name a few outlets.

All told, the coverage Shareable received resulted in tens of millions of impressions. Shareable’s traffic tripled. Our brand and reputation were greatly strengthened. These developments opened up viable pathways to financial sustainability for Shareable, a big deal for a startup nonprofit.

The message here isn’t that I got a lot of attention. What’s important is that I served as an example. A real-life example gives media stories credibility. Examples help people connect with big ideas. And they become testimonials for a way of life.

Moreover, these stories work to change the cultural narrative about what it means to be human. Together these stories say that human beings succeed by sharing. And they change the very definition of success at a time that we desperately need to do that.

How many people can we reach if we tell our stories together?

Our contest is designed to give you and the sharing community the opportunity to do exactly that. Think about what could happen if hundreds or even thousands of people tell their story of sharing simultaneously? If I could reach tens of millions of people with a few blog posts, perhaps we could reach billions together.

We’ve designed the contest to be a movement moment in more ways than one. When you enter the contest, you’ll have a chance to share your story with your friends and family. You’ll become an example in your own circle.

And your entry will become part of a pool of stories available to everybody through a Creative Commons license. By contributing your story, you’ll help equip the media, community groups, nonprofits, the government, and startups with the many examples needed to tell the story of sharing.

So this is my ask. Please enter the contest by telling your story of sharing. And open up the possibility that your life and the world could be changed dramatically for the better.