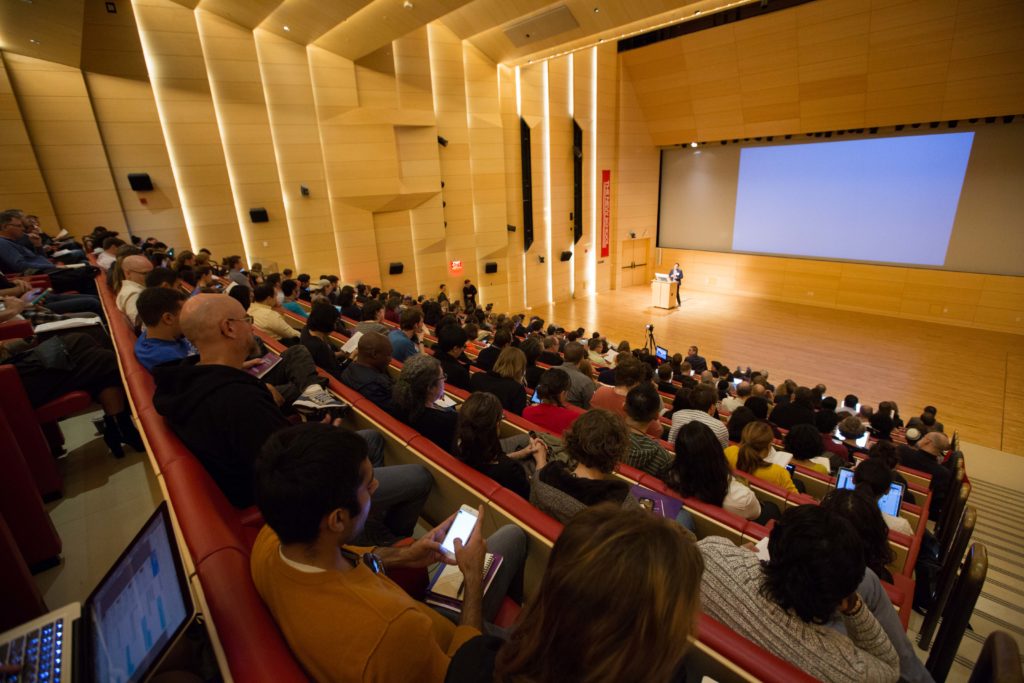 “Silicon Valley loves a good disruption. So let's give them one.”

Thus Trebor Scholz kicked off the first-ever conference on platform cooperativism to a packed auditorium of technologists, students, academics, co-op developers, and activists at The New School last Friday morning. So-called “sharing economy” digital platforms like Uber, TaskRabbit, and Airbnb have taken control of our work and our homes, making labor even more contingent and precarious than it already has been historically under capitalism.

Such apps have received widepsread attention and adoption due to their ability to deliver goods and services on demand to consumers. The conference explored how we might utilize recent technological developments toward truly democratic ends. In Scholz's words: “Platform cooperativism embraces the technology, but wants to replace the ownership model.”

The idea of “platform cooperativism” came from the title of an essay Scholz wrote late last year. Nathan Schneider, Scholz's collaborator and co-organizer of the conference, further expounded on similar concepts in reporting for Shareable. A panel discussion bearing the name, featuring both Scholz and Schneider alongside others, was also held in March at Civic Hall. 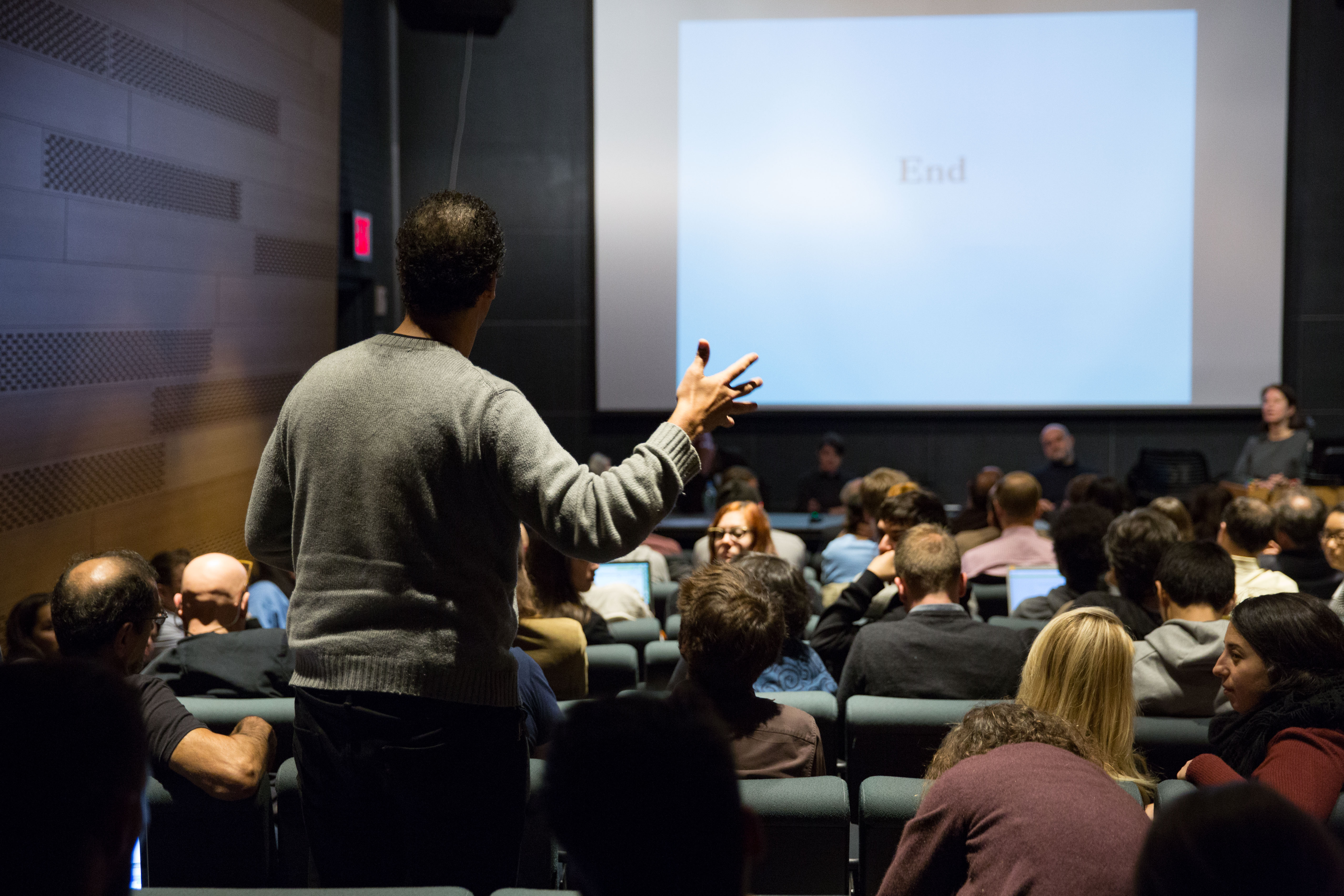 In Silicon Valley's version of the sharing economy, “digital workers remain invisible, tucked in between algorithms,” says Scholz. Schneider said on Friday that what we need are “algorithms for the 99 percent.”

Janelle Orsi, co-founder of the Sustainable Economies Law Center and one of Friday's plenary speakers, likened the power of these new companies with their massive market (over-)valuations and aggressive legal teams to the Wizard of Oz: Once you pull back the curtain, all that is there are a few algorithms and the network effects that come from first-mover advantage. But the vulnerability of a platform like Uber is precisely the contingency of its workforce that it relies on to maximize profits. Because those workers own their own assets and are not tied to the platform, they can very easily leave it for another.

“The history of the Internet is full of hope and disappointment,” says Schneider. “Free-and-open-source software, the 'personal' computer, the 'sharing' economy — each of these aroused hope for empowerment for people, only to become tools for monopoly and extraction.”

Silicon Valley, for its part, was busy the same weekend with the O'Reilly Media “Next:Economy” summit on the future of work. That conference is succinctly summarized by Tim O'Reilly's declaration on the conference website that “Every industry and every organization will have to transform itself in the next few years.” It is this Silicon Valley mindset of transformation as an end unto itself that platform cooperativism is thinking outside of and against. While tech entrepreneurs look to disrupt in order to profit and see adoption on platforms as a bigger bottom line, platform cooperativists are focused on creating democratic ownership and governance structures and seek to adapt technology toward those ends.

“When people in Internet culture talk about 'democratizing' something, they normally just mean expanding access to something,” says Schneider. “This is a pretty gross misuse of the word. A core challenge of platform cooperativism is to make sure that the need for democratic ownership and access of online platforms never gets watered down again into mere access for the sake of capital extraction.”

This past weekend's conference was unique because it achieved the rare feat of bringing together labor organizers and technologists in the same room and putting them in conversation with each other.

One panel on co-op development was lead by “old school” brick-and-mortar worker cooperative developers, but drew a crowd of developers interested in learning more about the ins and outs of the co-op world. Esteban Kelly, a co-executive director of the U.S. Federation of Worker Cooperatives, emphasized that platforms are really just another means of accessing markets for existing co-ops. That comment spawned a provocative hallway conversation about whether Marxism needs to be reworked in light of the platform economy given that an Uber driver and a TaskRabbit handyman both own their means of production, but what they lack are means of accessing markets.

In contrast, a session on Saturday was about the most technical of technorati topics: the blockchain — the decentralized architecture that powers Bitcoin — and how it might be used toward democratic ends. Another panel session explored the role of the state as a potential partner for the solidarity economy, while also reckoning with its role as purveyor of surveillance and repression of activists in the U.S. and around the world.

Some of the most exciting developments came from the self-organized breakout sessions, such as one on where@ — a proposal for a secure location-sharing app for activists. Other workshops focused on alternative currencies, ethical user interface design, and data science.

The most contentious moments of the gathering were around platform cooperativism's relationship to capitalism. Cindy Milstein, author of Anarchism and Its Aspirations, and Scott Heiferman, the founder and CEO of MeetUp, passionately debated the merits of a reformed capitalism. Heiferman said that he wanted to “save a certain kind of capitalism” and defended taking money from venture capitalists as a necessary precondition for making platforms that scale. Milstein, on the other hand, argued that even if MeetUp's goal is laudable, it is part of the Silicon Valley startup culture that is raising rents to exorbitant heights and displacing ordinary people in the San Francisco Bay Area. She said we need to “start with the ethics, not the technology; determine what it is we want to produce, create, and share.” 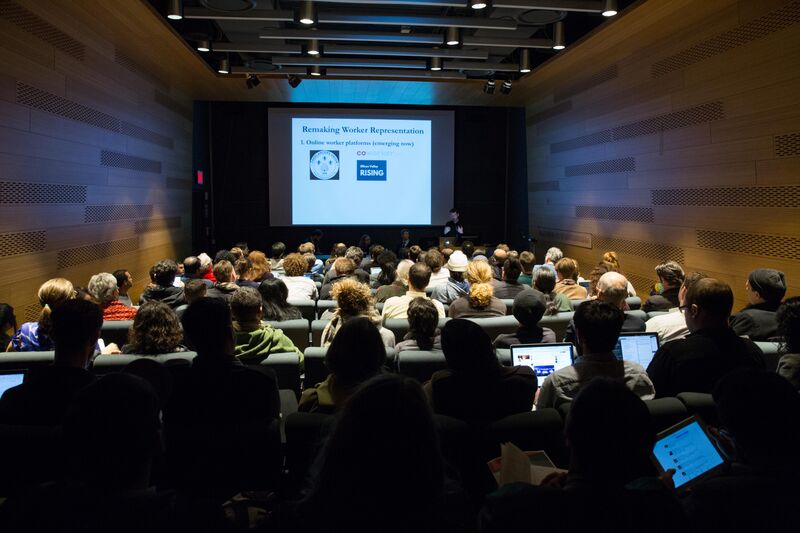 New York City Council Member Ben Kallos said that he sees his role as a policymaker as working to restore the free market. He was quickly met with a round of criticisms from the audience. Kallos later clarified to me that what he meant by restoring the “free market” was to end corporate welfare and public-private partnerships that equate to “the government handing out monopolies.” But the incident nonetheless highlights these tensions within the formative stages of this movement.

But these disagreements will seem familiar to anyone who has spent time in the U.S. cooperative movement. On the one hand are those who consider cooperatives a kind of “ethical capitalism” and, on the other, are those who see cooperatives a form of dual power: alternative institutions that can exist within capitalism but simultaneously act as a bridge out of it toward a new economy.

At times, panelists and audience members both questioned the premise of the conference, expressing concerns about technology replacing human-to-human interaction and even doubting that a digital platform can ever foster true solidarity. At other times, the conference seemed to meander from its topical focus. Despite the emphasis on governance and ownership at the outset of the conference, there was a lack of nuanced discussion about the finer points of ownership models and what scaling up democratic ownership structures would look like with multi-stakeholder models. There also seemed to be an assumption that someone born into service work will always do service work. A discussion of how to prevent on-demand service jobs (such as those on Uber, TaskRabbit, and Handy) — even democratically controlled ones — from remaining a permanent economic underclass was absent. Perhaps that is outside the scope of the conference, but it seems important to consider. The conference participants were, also, overhwelmingly white and male. Though it is apparent that the organizers worked hard to achieve gender parity among panelists.

Still, these are the kinds of questions and debates that should be happening at the nascent stage of this movement. The incredible turnout and robust discussions that took place, combined with actually existing projects and emerging collaborations suggest that this new movement could pose a real threat to the self-aggrandizing Silicon Valley entrepreneurs.

“We're drawing on decades of critical scholarship on the political economy of the Internet,” says Schneider. We're trying to offer an intervention that might help end the cycle that turns all our of great hopes and ideas for a truly democratic Internet into new tools for monopolies to exploit.”

All photos by Kenneth Ho

Didn't make it to NYC? Sessions from the Platform Cooperative Conference can be viewed here: https://platformcoop.net/video-stream

I’m an independent journalist, writing about politics, technology, human rights, and inequality. I was previously a staff writer at Fast Company, where I covered the exciting, frustrating, and confusing ways

I’m an independent journalist, writing about politics, technology, human rights, and inequality. I was previously a staff writer at Fast Company, where I covered the exciting, frustrating, and confusing ways that technology and politics intersect. That means I often write about topics like privacy, free/open source software, accessibility, gender equality, hacktivism, and net neutrality.

I got my start as a journalist working as a foreign correspondent in Turkey, where I wrote for Inter Press Service, Al Akhbar English, and Egypt Independent. Today I still write about Turkey on occasion and I co-edit the Turkey section on Jadaliyya, a website devoted to independent news and analysis of the Middle East. I was previously the web editor for Mashallah News, a collective arts and culture blog covering the Middle East and North Africa; I still have a lot of love for what the good people at Mashallah do – there’s nothing else quite like it on the web.