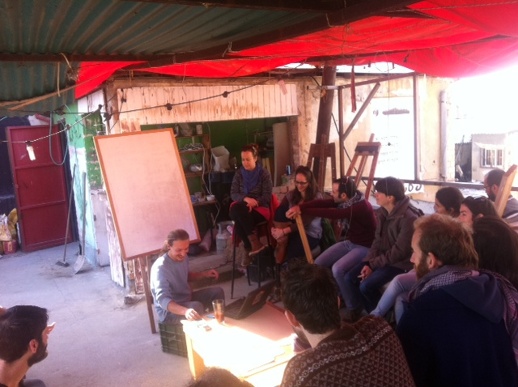 I was invited to visit Israel over Christmas to help build an online community platform with a built-in complementary currency, but I left supporting another project with another approach.

The project that paid my trip was run by an influential innovator who had a grand vision to connect communities together with a common currency and had invested years of assiduous networking to finance the web development.

His vision was comparable to many Silicon Valley startups – to build a community web portal, then entice people to use it, then think about how to recoup the running costs and even the startup costs. The portal would provide several tools: a facebook-like wall, a reputation system, a wiki-like knowledge sharing tool, a complementary currency, a marketplace of local and ethical goods and a credit card tie-in with Visa.

However it had suffered some setbacks, and was on the third fresh start in five years, the previous iterations having 'gone astray'. As I started working on the accounts, I started to realize that this iteration had already gone astray, and having been brought in just to do the accounting component, I started to feel like a chapter in a long saga. Every time I tried to do something, I came accross problems in the existing code, or realized that the specifications were vague, and I ended up writing a lot more questions and suggestions than actual code. By the time I was able to extricate myself from the project, I felt my best contribution was not software, but a requirements document which set the launch expectations back from two weeks to maybe six months – and only if a professional web shop was hired.

Meanwhile, one of the communities who had been waiting for that platform preferred to build their own, once they learned that the whole platform was open source.

The Bar Kayma was a business cooperatively owned which arose out of the protests that rocked Israel in 2011. It's a single tenement building in Tel Aviv, but with a bar/restaurant on the ground floor, a studio/gallery above, permaculture on the roof, and lots of smart, idealistic young people passing though. Nitzan, the organizer of Bar Kayma, was old enough to be father to most of them, and, wary of his maturity, he had given himself absolutely to the project. With his hands he had built the bar, and converted the first floor into a community-space, and now he was ready to create a timebank to strengthen relationships and encourage productivity within the community.

A technical volunteer, who had never seen the Drupal platform before, launched a crude site after a few evenings tinkering. It allowed users to register, list their offers and wants, to pay each other with 'Shefa' which literally means 'surfeit', and for Nitzan to moderate everything. Word soon went around, and people signed up in scores!

Nitzan had recruited a permaculture expert to commute in weekly from the desert and deliver a course on the roof, and he was adamant to charge for the course only in Shefa; it wasn't long before people were asking him 'How can I earn Shefa?' and he pointed them towards the online directory where everybody else's wants were listed.

So I wanted to draw the contrast between a top down project which was planned and even financed, but where the demand was contingent on the software being finished and promoted, and the design was driven by a single idealist, and a grass-roots project where the demand was palpable, the expectations low and the resource base much closer to the users.

Perhaps it is only when we accept that there is no money that the way is cleared for voluntary action and participative governance. Very rarely does given money actually align with actual needs, since movement of money is always conditional, which means financiers / donors pollute the very thing they intend to support.

Money always carries with it some polluting conditions and monetary input does not guarantee impact. But when the design decisions and resources, and by extension the ownership, come from the users themselves, at least you can be sure of participation!