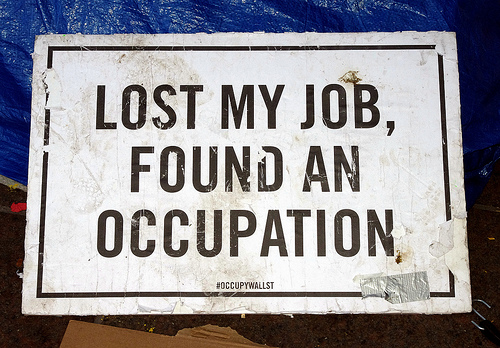 It’s a chilly day, but the “Occupy” protesters in jackets and scarves are warmed by each show of support from passersby.  They chant “This is What Democracy Looks Like” and “We Are the 99 Percent” to the accompaniment of plastic water bottles thumping on trash can lids.

The crowd resembles a random sample of all ages and backgrounds, from an 87-year-old lawyer in a Detroit Tigers ballcap (they lost the pennant that evening in the play-offs) to a grade schooler holding up a sign, “What About My American Dream?”

This democratic ruckus can be heard a block away, but politeness prevails.  No one—not those who look “square”, or those who look “scruffy”, or the police cruising past—are viewed as the enemy. Everyone who believes in economic fair play, environmental protection and citizen power is welcomed as an ally.

Hand-lettered signs on thin poster board or cardboard ripped from the side of a box express people’s frustrations and as well as their hopes—“The Revolution Will Not Be Privatized”, “Everyone Does Better When Everyone Does Better”, “I Can’t Afford to Hire a Lobbyist”, and “Main Street, Not Wall Street”.

Actually, this rally takes place on Main Street—in Traverse City, Michigan, a town of 14,500 in northern Michigan.  Throughout the late afternoon between 25 and 75 people gather at various points, heralding the call to “Occupy Traverse City” on the sidewalk in front of the Chase Bank. (Although here it's called Front Street.)

The response is positive overall from passing motorists and pedestrians, both autumn-colors tourists and Saturday-night-on-the-town locals.  Some drivers enthusiastically hit their horns in support  (or wives reach over from passenger’s side to do it when their husbands were slow to react), and pedestrians joined the ranks for a few minutes on their way to the dinner or a movie.

A few stern-faced motorists, however, speed up at the site of the protesters, determined not to make eye contact.  One man in a pick-up truck with a small poochon (poodle-bichon mix) on the seat next to him proffers a thumbs-down.  Another well-dressed man in a SUV yelled “cry babies” out the window before accelerating over the speed hump around which the crowd gathers.  That struck me as a curious slur, seeming to imply that the “losers” in this financial-crisis-cum-swindle have no one to blame but themselves.

A minute later Lea Ann Sterling, a middle-aged woman from the nearby town of Empire, lets me know, “That was former Governor Milliken who just drove by and waved at us.”

“Yes, but he was governor back when politicians were civil.”

Meadow Carnes, a soft-spoken student with bleach-blonde hair holding an artistically decorated placard reading “Anti-War”, says “I wanted to come down here because I think they are saying some pretty good things.”

I’ve been part of many political rallies through the years, as a demonstrator and a reporter, and this feels different.  It’s the same at Occupy Minnesota back home in Minneapolis, where the Sheriff’s office recently tore down 28 tents on an evening with near freezing temperatures.  But the occupiers are still there.

No one is quite sure how many Occupation actions are underway, but in Traverse City I hear about what’s happening with Occupy Grand Rapids, Occupy Lansing and Occupy Kalamazoo. And this is just in Republican western Michigan, and doesn’t count Occupy the Upper Peninsula and 8 occupations in eastern Michigan listed on the Occupy Together website of 466 around the world, from Occupy Abilene to Occupy Yuma.

Compared to most protests where everyone turns out at a certain time to march and chant in a choreographed ritual, this is more inhabitation than performance.  Our presence is rooted in solidarity with an overwhelming majority of Americans, not just a dissenting subset.  The entire Occupy movement unfolding around the world offers an inkling of how commons-based activism could evolve.

Lea Ann Sterling mentions that there would likely be many others here, except that the Great Lakes Bioneers conference is going on a mile away at Northwestern Michigan College, which is why I am in town.  Bioneers means “biological pioneers,” ecological innovators searching for new solutions to a wide range of social ills.  This year’s theme was “Reclaiming the Commons.”  And the Occupy crowd on Main Street swells as many of the more than 500 conference attendees stop in on their way to the World Premiere of the movie “When We Run”, a documentary about building schools in Ethiopia that was part of the 10th annual Bioneers conference in Traverse City.