Combatants of the corporate sharing economy met on neutral ground April 24 at Fordham University Law School to explore how (or how not) to regulate the Airbnb’s of this world. New York, of course, is the state whose regulators haven’t swallowed promotional Kool-aid of this sector, which presents itself as caring caretakers of “microentrepreneurs” of the sort who rent rooms in their apartment to make ends meet or pick up riders through Uber to raise funds to help their ailing grandmother. A law professor at the Sharing Economy, Sharing City: Urban Law and New Economy conference who scoffed at regulators’ efforts even called NY State “hostile” to the enterprises, which seem to believe they are immune from the normal operation of government regulation.

The companies have “chutzpah” in the way they fight regulation, said Neil Irwin in a post last year when Airbnb was refusing to reveal to state regulators information on its hosts in New York.

Rather than begin a lobbying campaign to try to clarify how they might legally operate, the companies’ approach has been to descend on a market, open up shop, build a client base and then dare regulators to stop it. When regulators step in, as they inevitably do, the companies hope to already have thousands of happy customers ready to raise a stink about having a beloved product taken away.

“I have joined with local law schools to make New York’s laws and regulations less opaque to startups,” he told the audience.

This collaboration will not only help new companies navigate our regulatory system, but it will also help provide insight to the State and the City about outdated or overly cumbersome rules, as well as about trends and needs in this rapidly growing sector of New York’s economy. With this announcement, New York has become the only state and city with start-up friendly clinics, backed up with authoritative legal expertise. 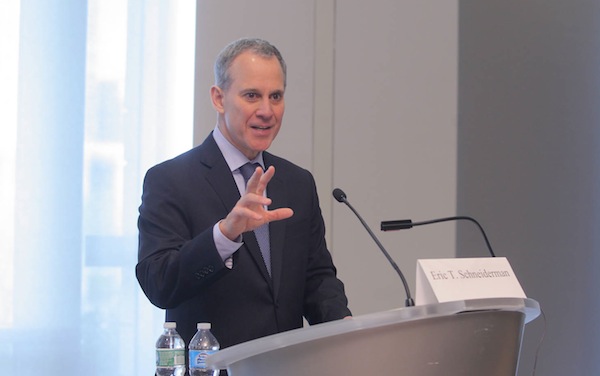 Schneiderman made international news in October 2014 when he issued a report using Airbnb’s own data finding that more than 70% of New York City rentals in two categories were illegal under state or local law. NYS curbs short-term rentals of less than a month unless you are in your apartment. Schneiderman’s data also punctured Airbnb’s image of supporting “microentrepreneurs” with the finding that 37% of the earnings and 36% of the bookings in the city were by commercial outfits making up only 6% of the users. Meanwhile, while Schneiderman was on his hunt for data, Airbnb was busy removing large purveyors of rooms—virtual “illegal hotels”—from its site.

In making the case for regulation, the attorney general opened his keynote with the story of William Howard Taft meeting with 300 railroad executives in 1905 while serving at President Theodore Roosevelt’s secretary of war. The railroads had become huge connecting parts of the economy, Schneiderman recalled—even more than the Internet companies are today—and Roosevelt was promoting legislation to curb abusive business practices exposed by muckracking journalists. “You must respond to public demands,” the business friendly Taft told the executives.

“In other words,” Schneiderman said, “be part of the solution. Work with the government to figure out functional rules that support and protect responsible businesses. And don’t defend the bad guys.”

He also conceded that regulators need to drop rules that become outmoded as the economy changes. But he argued that doesn’t mean regulators should drop their principles. He listed four examples of guiding values in regulating the “sharing economy” and the rest of the economy: keep defending consumers against deceptive business practices; keep defending the environment, public safety and taxpayers from bearing the risk of “externalities” created during a transaction; defend workers “as old industries give way to new systems of labor”; and fight monopolies that curtail active competition in the marketplace.

In Airbnb’s case, “apartments used by tourists should be subject to a specific set of safety standards and building codes, and… residents in apartment buildings have some right to expect that the apartment five feet across the hall from their children won’t be turned into a hotel room.”

On the other hand, he agreed that taxi law is becoming obsolete in the age of apps, although not requirements that drivers have commercial insurance or pay standard taxes on fares.

He offered two examples of tech companies successfully collaborating with the government to solve new problems: one was when a coalition of the attorney general’s office and other law enforcement nationally prevailed on smart phone manufacturers to create a “kill switch” to combat a crime wave; once they did so, thieves ended up with a dead phone they couldn’t sell. The other was Uber dropping its surge pricing for rides during horrific storms, which violated the state law against price gouging during emergencies.

“That law was passed in 1979—long before anyone could have conceived of a smartphone, let alone “dynamic pricing” within an app to hail a taxi! But the law’s underlying principle—that there should be reasonable parameters on pricing for goods and services during true emergencies—is as valid today as it was 35 years ago.”

On the program before Schneiderman was David Hantman, Airbnb’s head of global public policy, and himself a graduate of Fordham Law School. He was tasked with complaining to the press when Schneiderman sought data from the company last year. “He is asking for data on thousands of regular New Yorkers,” he said at the time, striking the tone of fighting for the little guy. He struck a similar tone at Fordham but with a hint of triumphalism. “We’re in 34,000 cities” and now in Cuba. The platform has solved a huge logistical challenge and is creating its own reality.

His boss, Airbnb’s CEO Brian Chesky notoriously dismissed existing law as not relevant to his business. He said in 2013, “There are laws for people and there are laws for business, but you are a new category, a third category, people as businesses.”

While data is limited, at least some of the “microentrepreneurs” Chesky was extolling are forced into picking up work through the corporate sharing platforms because of the bottoming out of their wages and the economy. The corporate sharing platforms allow the greater exploitation of those at the bottom of the economy, shifting the cost of the business onto those already struggling, a panel of worker advocates and researchers argued. They are “labor market intermediaries” organizing available workers, said Brishen Rogers of Temple University School of Law, like the unions on the old waterfront. “We have a long history of regulating labor market intermediaries,” he said and that history can continue with the ones now operating by app.

Abby Scher is a sociologist and journalist who writes about economic justice and the solidarity economy.  She is an Associate Fellow of the Institute for Policy Studies.

Abby Scher is a sociologist and journalist who writes about economic justice and the solidarity economy.  She is an Associate Fellow of the Institute for Policy Studies.