Notes from the International Commons Conference - Shareable
Skip to content

Where do conservative urbanists, liberal activists, and free culture advocates congregate? Last week it was in Berlin at the first ever International Commons Conference (ICC) held by the Commons Strategies Group and the Heinrich Boll Foundation. The combination of traditional and digital commons was explored as a transformational paradigm for the first time through an international conference in keynote addresses, conference tracks, breakout groups, and plenary sessions over two days.

Sometimes conferences are cultural interventions. This seemed the case with the ICC. The conference was timely in a couple of important ways. The economic and environmental crises have leaders looking beyond government and the market for solutions. And the commons have come to the fore because of Elinor Ostrom’s Nobel win last year for her work on the commons and the recent ascent of digital commons. Together, traditional and digital commons offer a way forward that combines local traditions of stewardship with connection to global civil society.

Barbara Unmüßig, president of the Heinrich Böll Foundation, welcomed attendees highlighting the importance of the commons, as they, “could provide a catalyst for transition to a post-fossil era in which people actively help shape their lives and the environment they live in.”  Indeed, a key thesis of the conference was that, “commons are the enabler for all other social goals, including environmental ones, which in essence are social.”

In the keynote speech that followed, David Bollier suggested that attendees may look back on the conference as an historic moment when a diverse group of commoners began to reinvent the idea of the commons in a globalized context and connect isolated projects into a powerful movement. The richness of the dialog that followed certainly gave me the feeling that this was possible.

The private, small group and plenary discussions were the most interesting to me for this reason. It was in these discussions that the different perspectives on the commons became most apparent, thus giving hints about how they might be combined into a more comprehensive worldview. Here are a few of the dividing lines I noticed during the conference:

All in all, it was an eye-opening event which fulfilled its promise. It opened a new vista where participants could see how diverse commons projects might work together thus laying a foundation for action. 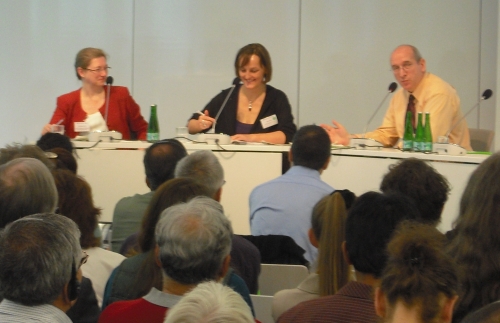 Ruth Meizen-Dick, Silke Helfrich, and Michel Bauwens on a panel about commons as a transformational paradigm.