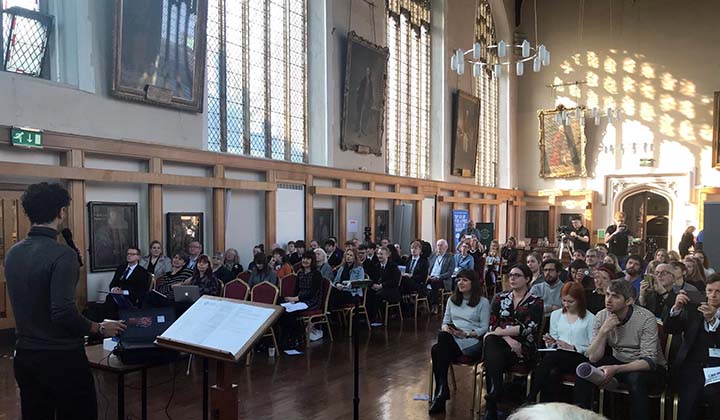 After a grassroots campaign run by residents, the East of England capital has become the UK’s first recognized sharing city.

An English city that was completely surrounded by walls until the late 1800s was recently recognized for its efforts to tear walls down. Norwich, the best-preserved medieval city in the United Kingdom, in January became the country’s first urban area named a “Sharing City.”  The designation comes from the Sharing Cities Alliance, which promotes innovative and effective sharing programs while connecting city governments interested in tapping into the sharing economy to help address housing, transportation, waste, unemployment, and other urban challenges. Cities that take part tend to focus on facilitating programs that tear down barriers, bring residents together and build connections and community.

Norwich’s journey began in the fall of 2017 when a group of activists brought together local stakeholders to discuss the collaborative economy’s potential to enhance life in their city. They launched a grassroots campaign to raise awareness around the local sharing economy and set the goal of seeing Norwich recognized as the UK’s leading sharing city by 2020.

The community sharing campaign quickly attracted the attention of Norwich City Council and the Norwich Business Improvement District (BID), an organization that seeks to enhance local trading conditions and improve the vitality of the city center for businesses, employees and customers. Both the council and the BID could see the potential for Norwich to become a global leader in sharing.

“The sharing city idea is something that really captured the imagination of Norwich’s citizens and businesses,” says Stefan Gurney, executive director at the Norwich BID. “We quickly realized it would be a natural fit to formalize and celebrate the many sharing activities that local people were already engaged in. The next step now is to build on them through collaboration with other cities and fresh thinking about Norwich’s future.”

For a city of its size, Norwich has an impressive variety of volunteer groups and businesses operating in its sharing economy. For example, cashless clothing swap shop New-U offers work experience and apprenticeships to young people from disadvantaged backgrounds. Norwich Foodhub works with all major UK supermarket brands to reduce food waste and tackle food poverty.

The global headquarters of the award-winning car sharing company Liftshare is located in its central business district, and the city’s two shopping malls make the most of disused retail space to run honesty libraries and community hubs for activities like ping-pong and foosball. Local residents even founded an insurance brokerage called Inlet that caters specifically to residents and businesses participating in the sharing economy.

Now that Norwich is a member of the Sharing Cities Alliance, it will work closely with other member cities such as Barcelona, Athens, Stockholm, and Dallas. In February, Norwich celebrated its status as the UK’s first sharing city with an official launch event attended by a diverse group of residents, voluntary groups, businesses, and policymakers.

“More and more of the world’s cities are working together to utilize the opportunities and overcome the challenges that the sharing economy and digital platforms present,” says Pieter van de Glind, co-founder of the Sharing Cities Alliance. “We’re delighted to welcome Norwich as the UK’s first sharing city, and we look forward to learning from its insights, experiences, and organizations.”

As more small cities embrace the sharing economy, they bring unique perspectives and a fearless, independent spirit to the worldwide movement. Those are surely vital ingredients for creating a more sustainable, prosperous and inspiring future for all.

Lauren Razavi is a writer and consultant, as well as an initiator of Norwich’s grassroots sharing city campaign. She blogs at www.welagom.com and tweets

Lauren Razavi is a writer and consultant, as well as an initiator of Norwich’s grassroots sharing city campaign. She blogs at www.welagom.com and tweets @LaurenRazavi.