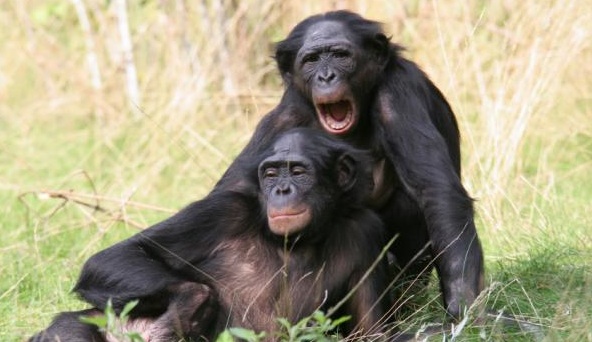 Chimps recognise unfairness, even when it involves individuals other than themselves. This sense of unfairness towards others may be a rudimentary form of the social justice that characterises human societies.

In earlier studies several apes, monkeys and even dogs responded negatively when they received a meagre reward for the same task that earned others a more lavish pay-off. But none of these animals apparently recognised unfairness directed at others.

Sarah Brosnan, a primate behaviourist at Georgia State University in Atlanta, and her colleagues trained captive chimps to exchange tokens for a food reward, then tested how same-sex pairs of chimps reacted to various levels of reward. As expected, chimps were more likely to reject a boring carrot when their partner got a yummy grape for the same token. Surprisingly, the chimps were also more likely to reject a grape if their partner only got a carrot.

In previous experiments, other groups of chimps showed no sensitivity towards unfairness directed at others. Perhaps Brosnan's animals rejected their "undeserved" grapes in part because they sat right next to their less fortunate partner and may have feared retaliation for their windfall, the researchers suggest.

But the chimps' awareness of the mistreatment of others as well as themselves also lays the groundwork for complex social interactions more like those of human groups, they note.

This study brought to mind an essay by anthropologist Christopher Boehm, collected in a new anthology The Compassionate Instinct:

It was only in 1987 that Harvard primatologist Richard Wrangham made a major breakthrough in his study of how human behavior relates to that of our closest primate relatives. In view of the fact that humans, gorillas, bonobos, and chimpanzees share a recent ancestor and more than 98 percent of their genes, Wrangham determined that any behaviors all four of these species exhibit today must also have been present in their shared predecessor, which would have lived about seven million years ago. He called this ancient ape the "Common Ancestor."

Wrangham identified some social behaviors shared by all four species, including the tendency to live in groups and the willingness to attack members of the same species. But with respect to the Common Ancestral uses of power, he faced a problem: Bonobos, chimpanzees, and gorillas were distinctly hierarchical, with aggressive alpha males; by contrast, human hunter-gatherers were egalitarian, suggesting that our species lacked both innate hierarchical tendencies and tendencies to develop leaders. This inconsistency made it impossible for Wrangham to determine how this ancestor used power, and therefore made it difficult to offer any definitive conclusions about human nature.

Puzzled by this human anomaly, I surveyed almost 50 small, nonliterate cultures both bands and tribes—to see exactly how egalitarian they were, and why. I discovered that their egalitarian political arrangements were quite deliberate. They believed devoutly in maintaining political parity among adults. This belief was so strong that males who turned into selfish bullies, or even tried to boss others around for reasons useful to the group, were treated brutally, as moral deviants. The fact that on all continents, hunter-gatherers faced bullies or self-aggrandizing political upstarts —and faced them in spite of these strong egalitarian beliefs—told me that if these people had not so vigilantly worked against inequality, they would have soon turned hierarchical.

This new interpretation meant that by nature, today's hunter-gatherers were prone to try to dominate one another, just like the other three species of living apes—and therefore so were the Common Ancestor and humans all down the evolutionary line. In fact, because this urge to dominate is so intrinsic to humans' political nature, hunter-gatherers who wish to stay egalitarian have to use not only ostracism and shaming but also ejection from the group and sometimes even capital punishment to hold down power-hungry political upstarts. We must ask, then, why a species so inclined to domination has been motivated to insist that power be shared so equally. And here, I believe, is the answer: Just as all four of the aforementioned species have strong propensities to domination and submission, so do they also naturally resent being dominated….

Read the whole brief essay, please, but here's the punchline:

In effect these egalitarian bands did something very special about the problem of power. They arrived at a largely implicit "social contract,"  by which each political actor conceded his personal pursuit of dominance in order to remain at political parity with his peers. In doing so, hunter-gatherers were able to cooperate effectively because their societies were so small. Similarly, a large national democracy can do its best to vigilantly limit power and uphold civil rights. But just like a hunting band, it must watch carefully for would-be dictators in order to pre-emptively curb their power if need be, and stand up to them decisively if they do get the bit in their teeth. This theory about our political evolution helps us understand why we are so often ambivalent about power.