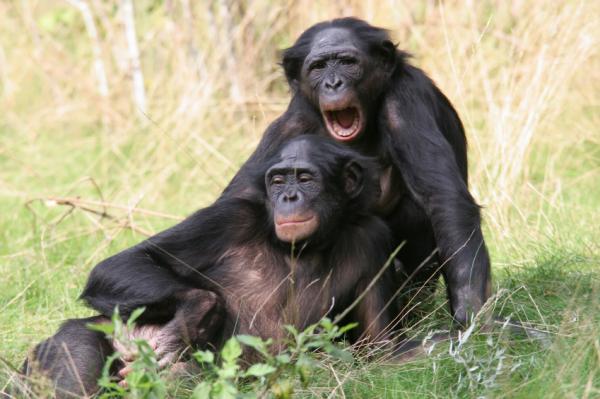 New research suggests that the act of voluntarily sharing something with another may not be entirely exclusive to the human experience. A study published in the March 9th issue of Current Biology, observed that bonobos — a sister species of chimpanzees and, like chimps, our closest living relatives — consistently chose to actively share their food with others.

"It has been suggested that only humans voluntarily share their food," says lead study author Brian Hare from Duke University in North Carolina. "However, the food sharing preferences of the unusually tolerant bonobos have never been studied experimentally." Dr. Hare and Suzy Kwetuenda from the Lola ya Bonobo Sanctuary for orphaned bonobos in the Democratic Republic of the Congo conducted a study with unrelated pairs of hungry bonobos.

In the study, bonobos had to choose whether to eat some food by themselves or to give another bonobo access to it. The test subjects had the opportunity to immediately eat the food or to use a "key" to open a door to an adjacent empty room or a room that had another bonobo in it. The test subjects could easily see into the adjacent rooms, so they know which one was empty and which was occupied.

"We found that the test subjects preferred to voluntarily open the recipient's door to allow them to share highly desirable food that they could have easily eaten alone — with no signs of aggression, frustration, or change in the speed or rate of sharing across trials," explains Dr. Hare. "This stable sharing pattern was particularly striking since in other, nonsharing contexts, bonobos are averse to food loss and adjust to minimize such losses."

The authors point out that it is possible that the bonobos in their study chose to share in order to obtain favors in the future. Additional studies are needed to gain further insight into why bonobos and humans share. "Given the continued debate about how to characterize the motivation underlying costly sharing in humans, it will certainly require future research to probe more precisely what psychological mechanisms motivate and maintain the preference we observe here in bonobos for voluntary, costly sharing," concludes Dr. Hare.

Want to learn more about the evolutionary basis of sharing and cooperation? See this Greater Good essay by Christopher Boehm, "Political Primates."