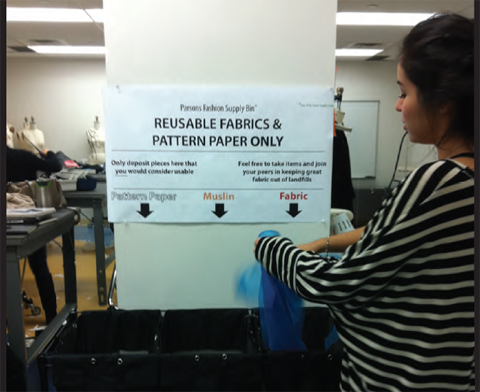 Collectively, it is estimated that at least one million tons of textiles are thrown away every year. Most of the waste generated in the fashion industry ends up in landfills amongst the various other stuff collected by us, every time when it rains and water seeps through the clothes no longer needed by us, it absorbs various chemicals that are present in the textiles used for our clothes. Despite knowing about the excessive waste involved in the industry, there is very little done to prolong the lifecycle of unused material.

The solution is to localize the process of recycling by providing a bin specifically catering to the fashion studio classes instead of having students travel to the location of the Green Supply Center. For instance, if a fellow student has made a garment and has leftover materials and pattern paper, he/she can put in the Fashion Supply Bin right in the studio, rather than the trash, and give another student, someone who perhaps has forgotten to bring paper or in need of a particular fabric, the opportunity to use it. Further, signage encourages students to leave pieces they would deem useable, and to freely take anything they would like to use. Posters put up in the studios show a textile landfill, helping to make the connection between the trashcan and where its contents eventually end up.

The overall success, in terms of results from our prototype, suggest that, if we placed these bins in every fashion studio, we could redirect a signicant portion of what would be waste into useable material. This would be a big step toward a more sustainable program for the fashion department and the New School, in general. This initiative would help integrate the somewhat separate schools in the University. Furthermore, the project's promotion might include images of items that were created with the help of the Fashion Supply Bin itself. 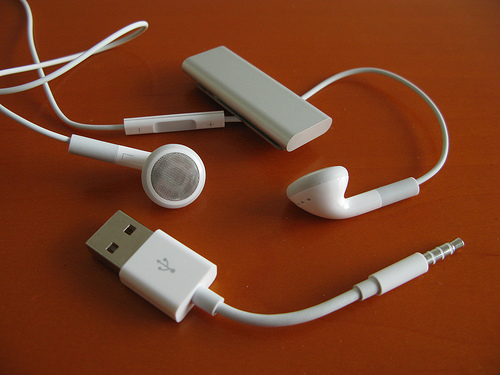 Techcessorize allows students to swap their old gadgets and accessories for ones they need. Photo credit: bfishadow. Used under Creative Commons license.

Rapidly using and discarding of technology is wasteful and damaging to our planet. The worst part about our technology consumption is that these gadgets are often still fully functional when we stop using them. With technology changing so fast, it’s likely that we will never use the older, inferior products we stopped using. (I never use my old iPod now that I can store songs on my iPhone.) It’s important to remember, though, that not everyone has the most up-to-date techno gadgets out there. And my old iPod cases and chargers could come in handy to someone who still uses their older iPod (and cannot find the appropriate accessories for it in stores because it is not the most current model).

This is the problem that sparked the idea for Techcessorize: a place for people to swap out tech accessories that they are no longer using. After pitching this idea, and running a prototype, I realized that people were interested in swapping much more than than just phone accessories. People have tons of phone cases lying around, but they also have other gadgets and their accompanying accessories they’d love to rid themselves of. Every new gadget we buy comes with so many of its own cases, bags, cords, and plugs, that it’s highly unlikely that we actually use them to their fullest capacity.

Then I thought, why don’t we all pool these items together in one specific hub — a Techcessorize shop? Where, for each item you give, you get to choose one item to take home.

After researching and brainstorming for ways to improve the community, we found that there are some cars owned by students and faculty in New York City or surrounding areas that have high idling capacities and that students are in need of long distance or expensive rides for occasions where the subway or a taxi would be inconvenient. Many students have large projects or need to go on site, away from school, and many times students are in need of going to the airport or stores like IKEA for dorms and apartments. This system would be exclusively provided by and participated in by New School students and faculty. Pick up and drop off locations would be on campus or on an otherwise-decided location nearby and these trips would be advertised on the homepage of My New School underneath Personal Announcements.

Initially our system was set up to aid students in taking superfluous trips and equipping them with a car so that they could more easily purchase more stuff. However, after the hurricane an option emerged that had not been previously considered. Students went to different drop off locations for victims with a car full of donations. Leading the project in an entirely new direction: A way to reach out in the community with a group of people.

Through Transport Me! Students were able to donate a much higher volume of supplies for victims of Hurricane Sandy, and made some new friends along the way!

These are final class projects in collaborative consumption by students in Professor Barent Roth's class, "Sustainable Business" at Parsons The New School, Environmental Studies Department. Publishing their work is part of Shareable's initiative to recognize the activity of college students in the sharing economy and catalyze more.