New Research: The Number of Sharers to Double Next Year - Shareable
Skip to content 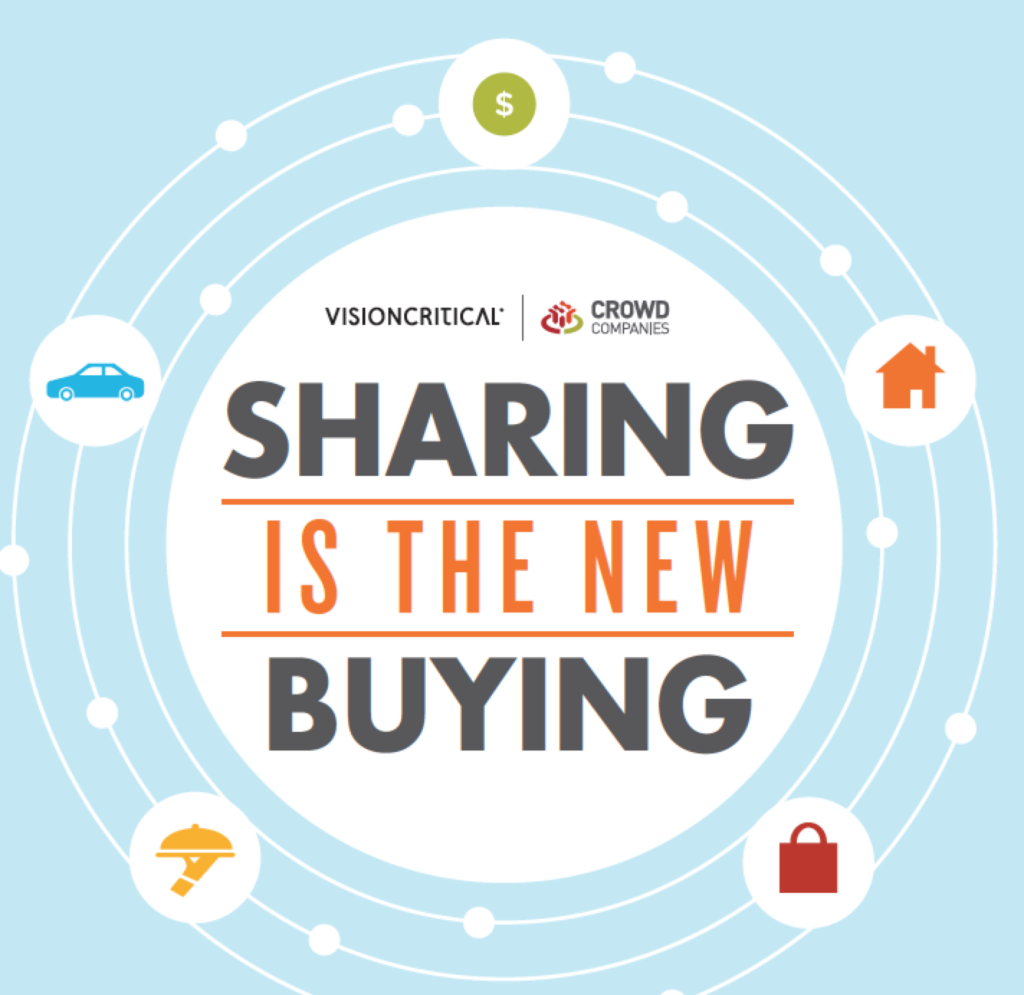 The cutting edge of the sharing economy over the last several years has been pushed largely by venture capital-backed startups like Airbnb and Lyft.  As the sharing movement spreads, these companies are increasing their market share and reducing the demand for traditional goods and services.

It’s enough to make an established brand a little nervous. At the same time, startups struggle to garner the resources needed to scale: a legal framework, local permitting and regulation, money, distribution, and a trusted brand are all major obstacles to the growth of sharing companies, although some of those challenges are being managed, as evidenced by Getaround’s recent announcement of an insurance partnership with Assurant Specialty Property.

Crowd Companies is a Silicon Valley brand council founded in fall 2013, based on the premise that “people and big companies can work together for new business models where both win.” The council was founded by analyst Jeremiah Owyang with big brands such as Adobe, Hyatt, Nestle, and Walmart. The council provides research, education and networking for big brands to help them succeed in the collaborative economy.

New data to support these new models is forthcoming this morning, as Crowd Companies and Vision Critical, a market research firm, released what they claim is the largest publicly available market research on the sharing economy to date.

The report, “Sharing is the New Buying,” explores the sharing economy across five sectors: goods, services, transportation, space, and money. Surveying over 90,000 people in Canada, the United States, and the United Kingdom, the study parses out demographics, participation, and intent to participate in the sharing economy, and makes some recommendations on how established brands can get it on the game.

The key takeaway is that, "The collaborative economy is about to take off. In nearly every category, at least as many people intend to try sharing in the next 12 months as have tried it in the past 12 months."

The report begins by discussing the history and societal, economic and technological drivers of the sharing economy, noting that a quarter of the population, termed “neo-sharers,” already participate extensively. The pre-owned, loaner and custom-goods market, according to the study, are the gateway to sharing, followed by services, transportation, space and money. 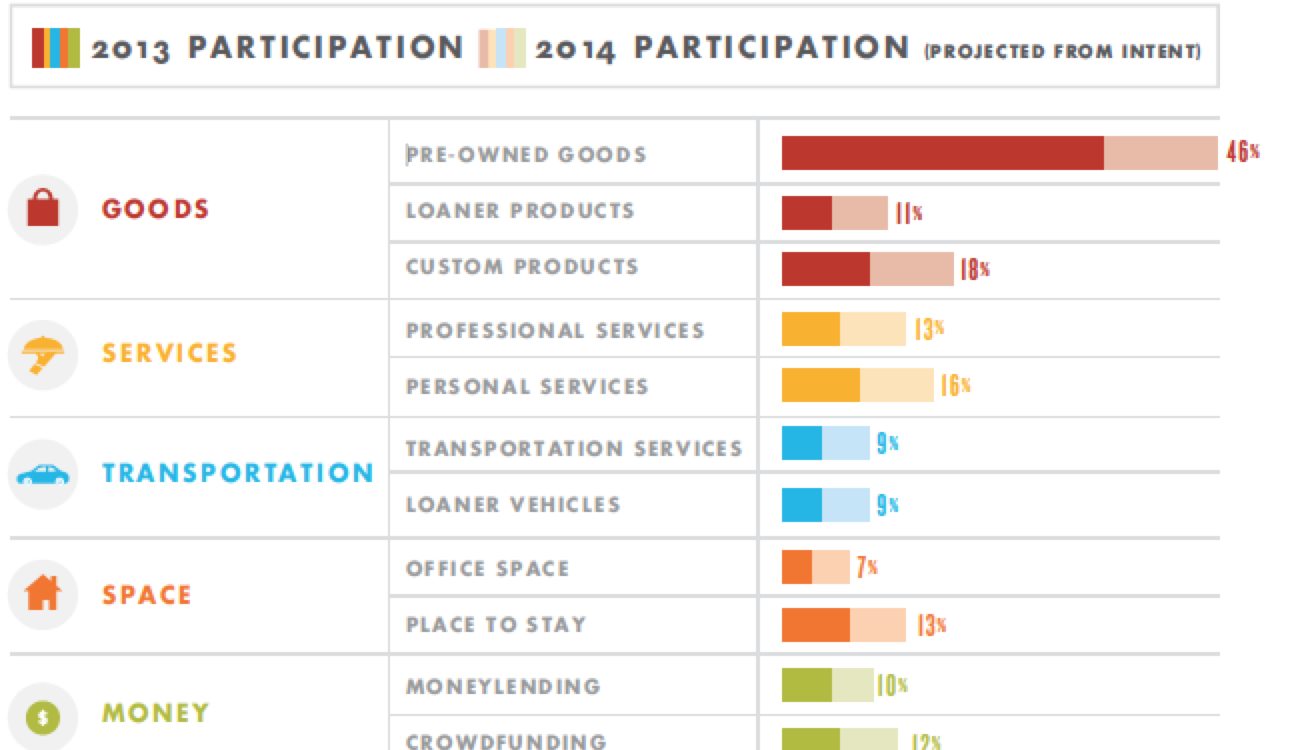 Sharers skew a bit female and young (18-34), but otherwise largely reflect the demographics of the larger population, something the study's author point to as a major reason big brands need to pay attention.

In addition to "neo-sharers," "re-sharers" are currently focused on goods but are apt to move into other sectors, are the transitional market that represent a huge emerging potential sharing market. 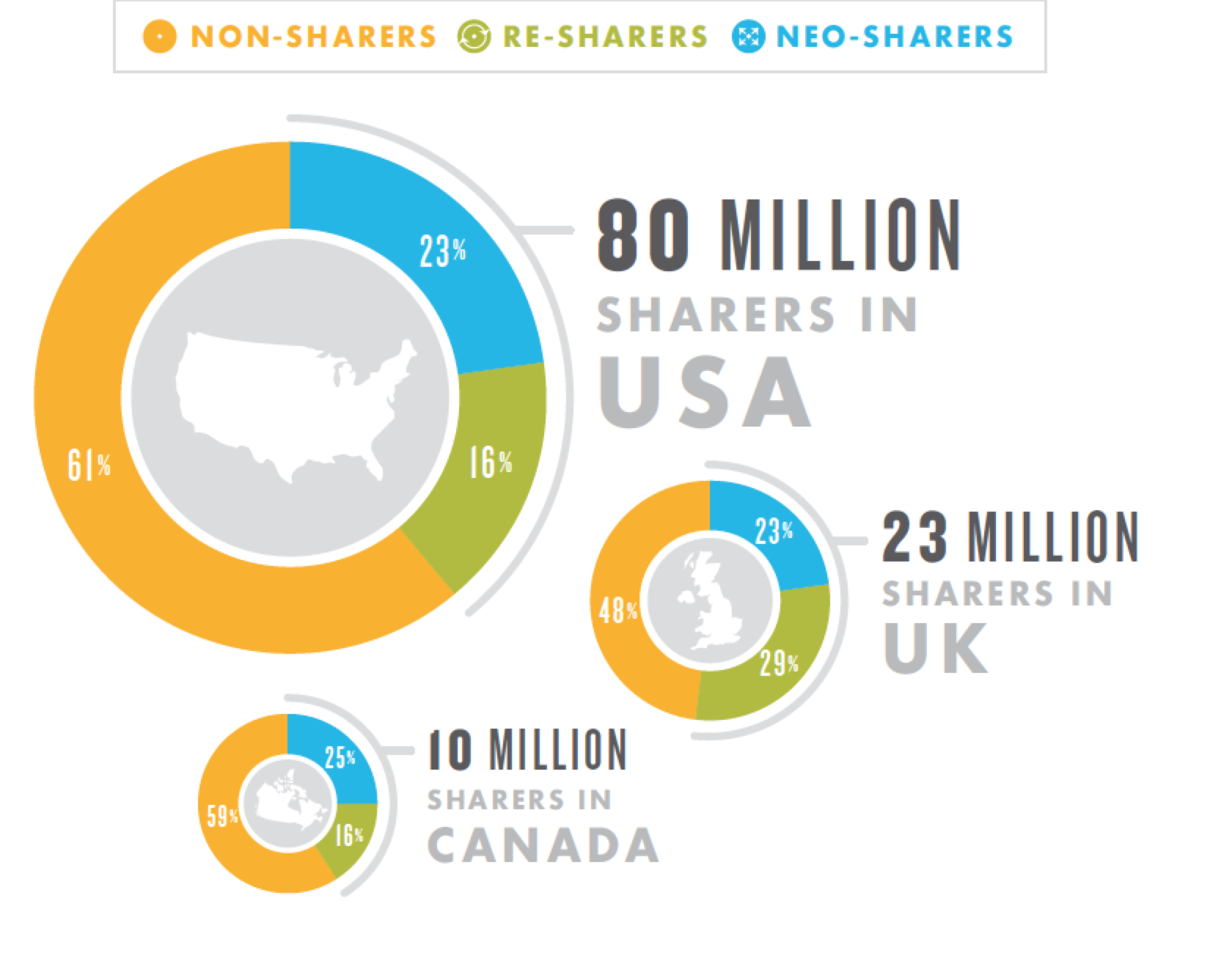 The digitally-driven sharing is currently more prevalent in urban areas, but is not expected to stay that way over the long haul.

The report also outlines several overarching market opportunities for companies large and small: honing in on "lifestyle as a service,” starting in urban areas, using social media marketing, and marketing the direct benefits of sharing.

The full report can be accessed below:

Sharing is the New Buying: How to Win in the Collaborative Economy from Jeremiah Owyang