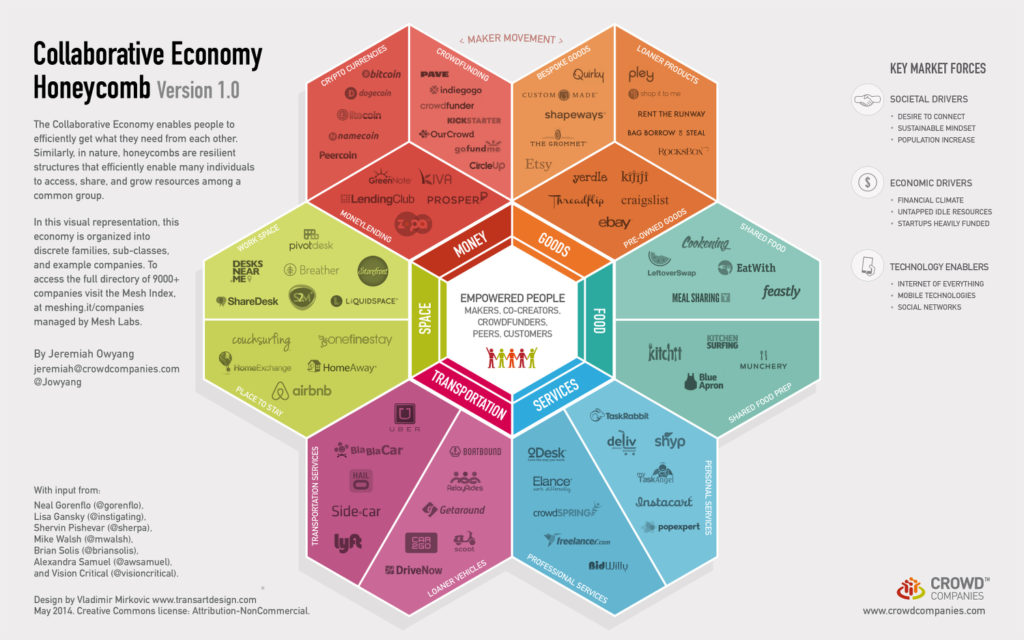 In their 2014 report on the collaborative economy, Crowd Companies (an “innovation council” founded by Jeremiah Owyang) and Vision Critical (a customer intelligence platform provider) concluded that sharing is here to stay. Their just-released follow up, “The New Rules of the Collaborative Economy,” offers more than an annual update on the growth of the sharing economy. It also asks why: Specifically, why do customers choose sharing over buying? Their answer is familiar. Though sharers are driven to share by a number of factors, write co-authors Owyang and Alexandra Samuel, the two most important are price and convenience. The third leg of the collaborative-economy stool is trust, which for the purposes of this report is more or less synonymous with brand.

“The New Rules of the Collaborative Economy” was written not for sharing advocates or existing sharing providers, but for established brands whose business model revolves around ownership. Thus it is less a deep dive into the contemporary sharing economy than it is a how-to guide for conventional businesses hoping to compete with what Vision Critical Andrew Reid refers to as sharing “upstarts.” The text on the report’s cover announces it as such: “A tactical report on how to survive and win.”

The report outlines three key areas of intervention for mainstream businesses confronting the sharing economy threat. First is price, which the Crowd Companies/Vision Critical questionnaire found to be a motivating force behind 82 percent of sharing transactions. Competitive prices can drive former buyers to share, surveyors discovered, but the reverse is also true. Moreover, suggest Owyang and Samuel, old-school brands that choose to compete with sharing companies from within—by, for instance, creating their own peer-to-peer marketplace—do so from the security of a relatively broad revenue base.
The second major consideration regarding buying versus sharing is convenience.

“Convenience poses a major challenge to established companies because it’s exactly where sharing startups have a structural advantage,” admit Owyang and Samuel. “The whole value proposition of sharing services lies in their ability to provide on-demand, web-enabled instant access products and services.” The best way to compete, then, is to get in on the game, including by partnering with an existing sharing provider to improve access to the established brand’s products. See, for example, Waffle House’s collaboration with delivery service Roadie.

Finally, “The New Rules of the Collaborative Economy,” emphasizes the extent to which trust can make or break a sharing enterprise. “While it might seem like the move to a peer-to-peer economy would make branding irrelevant, big brands actually matter more than ever,” write Owyang and Samuel. “The whole point of a brand is to serve as a promise for product or service quality. In the collaborative economy, customers turn to brands to determine whether a transaction is trustworthy.” Thus conventional businesses that do choose to move into the sharing space must do so carefully, so as to avoid damaging their existing reputation in the service of short-term growth in their customer base.

For those of us more interested in the collaborative economy itself than on its potential impact on established brands, “The New Rules of the Collaborative Economy” does offer a few interesting nuggets of data, especially regarding the continued expansion of North America’s sharing cohort. The survey on which the report is based indicated a 25 percent increase in the number of Americans and Canadians participating in the sharing economy since the previous years. Moreover, participation grew across every category defined by the research team by at least 10 percent; in some areas, like transportation services, participation doubled. If nothing else, the report is an important reminder that not all (and maybe not even most) sharers share for sharing’s sake. Instead, a spectrum of drivers are at work—a truth that actors within, not just without, the collaborative economy must recognize in order to thrive.