A few weeks back, I wrote about authors Laird Harrison and Jesus Angel Garcia, who are leveraging the social web to distribute excerpts of their novels in unusual ways. Now comes word that Neal Stephenson, with his new publishing startup Subutai, is attempting one of the boldest re-imaginings of the form to date with his novel The Mongoliad. The project by the author of Snow Crash and The Diamond Age is many things: a collaborative novel, a serialized tale, a wiki, and a multimedia experience told online and through apps for the iPad, iPhone, and Android phones. A collaboration between Stephenson and Greg Bear, Nicole Galland, Mark Teppo, and others, Subutai is billing The Mongoliad as “an experiment in post-book publishing and storytelling.” 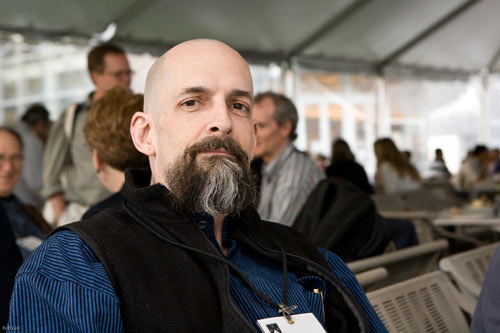 The first chapter is already online, and future chapters will be posted on the website and distributed through the various mobile apps, RSS, and the Kindle. Stephenson is funding the project through a subscription model, a monetization scheme that hasn’t proven very successful for many newspapers. Considering that a novel rewards immersion and compels its readers to continue, Stephenson may have found the key to selling subscriptions online. No matter the outcome, it’s a bold experiment, one that many authors and publishing houses will be watching closely. It’s also a welcome throwback to the Victorian-era serialized novel that Dickens mastered, a publishing model that made little sense to the 20th Century publishing industry.

Reviews of The Mongoliad’s first chapter have been mixed. At Salon, Andrew Leonard writes that “the writing feels a little rough and unpolished,” and is unimpressed with the multimedia elements, stating “as far as external bells and whistles are concerned, so far, the closet is pretty bare. There are a couple of illustrations, a very stripped-down glossary, and the forums are mostly full of people saying, ‘wow, this is neat, good luck!’” Rebecca Boyle at Popular Science writes, “here’s hoping for some tighter editing in chapter two.”

Which poses the question: is it fair or useful to review an unfinished novel? Book reviewers would never hold an early draft to the standards of a completed book, but when the whole notion of a complete novel is in flux, which is the final version that deserves critical appraisal? These new experimental forms challenge book critics as much as they do the publishing houses.

Stephenson has broken away from the traditional book industry, but publishing houses are also proving willing to experiment. The New York Times reports that Scribner is taking a note from iTunes, selling previously-published essays by Chuck Klosterman for 99 cents through Amazon, Apple and BN.com. Will the model that worked so successfully for song downloads work for short essays as well? I’m skeptical: as Matt Wood noted at the TriQuarterly blog, buyers listen to songs multiple times, making it a better value proposition. Also, the essays are already available in Klosterman’s book collections, which can be purchased for the Kindle and iPad through the Amazon store for $9.99, a much better value. Would you buy a 99 cent essay? Or subscribe to a serialized digital novel? And if not, what would compel you to do so?