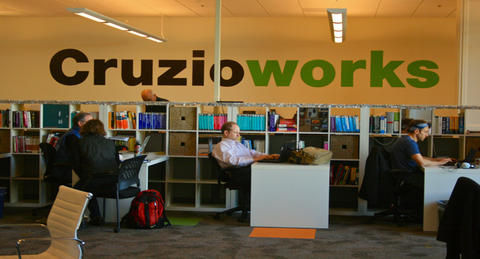 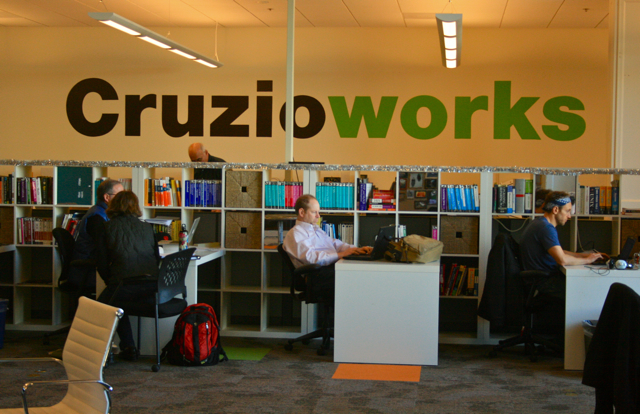 Just a few months ago, when I would find myself working at my kitchen table, unshowered and still in my pajamas at 4 p.m., the notion of querying ELLE Magazine with an essay on love gone toxic seemed impossible and really, quite laughable. In my new office space, flanked by a small population of entrepreneurs chasing dreams, it doesn’t. It might even be halfway written.

Or that's the hope, anyway, and the reason for this project.

On January 1, 2013, I purchased a 24 hour pass to Cruzioworks, the less expensive of two coworking spaces in my current city of Santa Cruz, California.

(For those unfamiliar with the term coworking: It's like a gym membership, only instead of loping along on a treadmill in pursuit of a more toned physique, you sit—or stand—in a shared office, in pursuit of self employed success.)

Sleek and airy, the coworking arena at Cruzioworks fills the ground floor of an old newspaper headquarters. A wall of windows reveals an amusing stream of pedestrians on their way downtown, or through the ever-revolving door of an adult pleasure shop across the street, where I imagine them perusing French ticklers and leather whips. "That one looks like it will leave some good welts, what do you say honey babe?"

In my new coworking space, the prehistoric printing press has been replaced by 30 or so well dressed geeks; designers, software engineers, and entrepreneurs with start-up dreams twinkling in their eyes—like Joey Jelinek, 26, who wears a bandanna every day until he launches his company, "Chimpdig." There is also a built-in cafe, an array of desks and plush arm chairs, and a break room, home to the perpetually-empty coffee pot.

If you haven't guessed by now, I am a freelance writer. I just turned 28. And I may be clinically insane.

I decided to join one of the world's 1,779-and-counting coworking spaces because I'm banking on the research: positive impacts on income, productivity, business network, and private life, as well as the fortunes of serendipity, have all been well documented as coworking has grown—almost doubling each year over the past seven years.

Recently, a successful artist  reminisced that “freelance” is synonymous with “unemployed.” I bristled. This isn’t true—I have tons of work. Work is not the problem. The problem is deeper and much more grave.

A year and a half ago, I quit the last of my side jobs (slinging pizza and beer, steaming milk for espresso drinks, summers spent passing out bacon wrapped shrimp to tipsy mother-in-laws and scraping wedding cake off plates, etc), to see if I could "fly solo" on my writing alone.

A bold move for some, and quite possibly suicidal. At least for a college graduate with school debt, living in a seaside town where the cost of living is 176% that of the national average.

"Flying solo" is a generous way to sum up 2012: The vertigo of a downward spiral was the closest I came to that soaring "I'm flying solo!" sensation I fantasized about while arranging crudités on silver platters.

I flapped my wings, and like a paparazzi who catches a tendril of the Gaga's perfume, unceasingly chased down stories. Relationships toppled from optimistic heights, worry lines formed. There were hideous breakdowns in which I considered moving back home with mom, an option most twenty-somethings are aware, has become a common trend for the "boomerang" generation. Wracked with hope and/or delusion, I purchased a 24 hour coworking pass instead.

I try not to dwell on the fact that I'm paying to be here, rather than the more ideal opposite, and I avoid entertaining the widely known truth that writers, especially beginning writers, barely make any money. (With a few glorious exceptions, like Mara Altman for whom my envy and awe live a married life at great depths.) 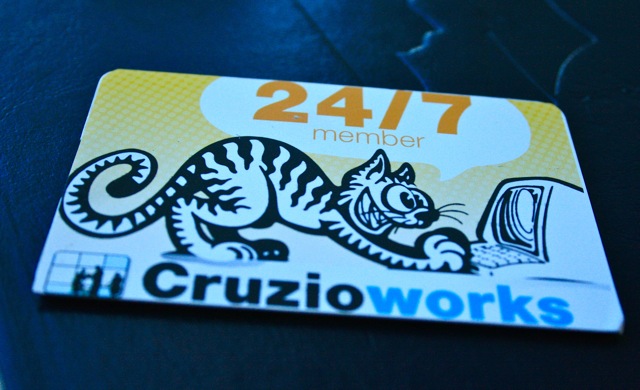 In effect, as one of the only writers in an office full of competent techies, I'm going to fake it until I make it, or crash and burn rather publicly.

One month in, my lifestyle is similar to the kitchen table days: a constant pursuit of the next story, even while three simmer, five lay frozen stiff in the freezer, and one awaits its final seasoning. The challenge, will be figuring out how to keep the small pots from boiling over as I slide in a Goliath dream vessel brimming with magazine articles that have been steeping in creative juices for far too long. (The kind that could pay two months of rent each!)

In a recent interview by Andrew Zuckerman, the American painter and photographer Chuck Close, said:

"I always thought that inspiration is for amateurs. The rest of us just show up and get to work. If you wait around for the clouds to part and a bolt of lightening to strike you in the brain, you're not going to make an awful lot of work."

I'm showered, I'm dressed, it's 4 p.m., and I'm not at my kitchen table talking to my beta fish; anything is possible, right?

I've already taken the plunge; will coworking help me find my wings? Or even just an open parachute for a softer landing? Either way, you, my dear reader, now have front seat tickets to how it all unfolds.

Follow My Year of Coworking blog for more about the colorful characters that make up the independent workforce at Cruzioworks, and see what they say coworking does for them.

Question or Comment? I'd love to hear from you, whether you are a coworker or  freelancer.

Find more of my writing on my Facebook Page. (Website and Personal Blog are in the works.)