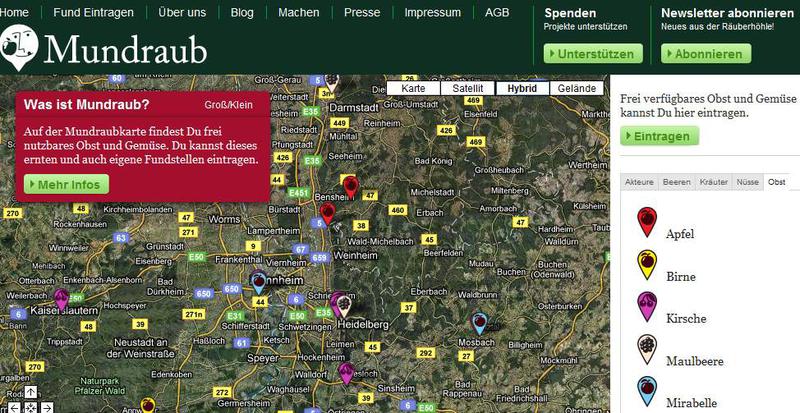 This essay originally appeared in The Wealth of the Commons. You can purchase the book at Levellers Press.

Author Katharina Frosch (Germany) is co-founder of Stadtgarten and Mundraub which won sustainability awards in 2010 and 2011 from the German Council for Sustainable Development.

In a rural area in the former East Germany, late summer 2009: Shimmering heat, the intense odor of fermenting fruits is in the air. A tree covered with hundreds of juicy pears, and a foot-high layer of rotting fruit on the ground. A stone’s throw away – plums, mirabelles, elder bushes and every now and then an apple tree along the path, maybe of an old, rare variety. An abundance of fresh fruit – in normal seasons, much more than needed to feed birds, insects and other animals – forgotten, abandoned, unused.

Is this our common fruit? Are we invited to harvest it? Today, at least in Germany, unowned fruit trees formally do not exist. Orchards situated outside human settlements are mostly in private hands, even if there is no fence around them. The mile-long fruit tree alleys characteristic of many regions, particularly in the former East Germany, are state- or region-owned. Fruit trees in parks belong to the cities. Harvesting apples without asking the owner amounts to stealing. 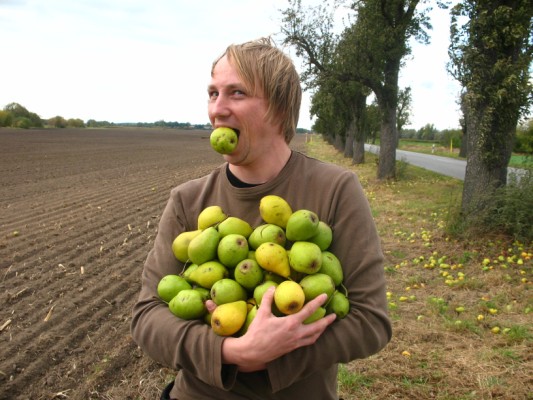 The clash between abundant but forgotten fruit in the public space – and the lack of information about property rights – calls for action. Whom to ask if we see an apparently forgotten fruit tree, full to bursting? The mundraub (1) website invites people to tag forgotten fruit trees on an interactive map and to locate existing trees that can be harvested. The website sets forth basic rules to respect private property and prevent damage to the trees and the natural environment, and calls for fair play in general.

In the first two years since the website launch in 2009, more than half a million people have accessed the site, and several hundred are actively contributing to the fruit tree map. The map currently lists about 3,000 “find spots,” which roughly correspond to 20,000 – 30,000 trees. So is the rediscovery of common fruit based on the mundraub map another confirmation of Elinor Ostrom’s Nobel Prize-winning theories about community self-management of common goods?

Some prophets of doom warned that the mundraub website would incite swarms of reckless, hungry urban dwellers to savage private fruit plantations in the countryside and drive local farmers to ruin. However, there is no evidence that tree damage or stolen fruit have increased since the launch of the website. Users seem to intuitively adopt a responsible attitude. More than once, a “find spot” was taken off the platform at the request of users, lest it get over-used. 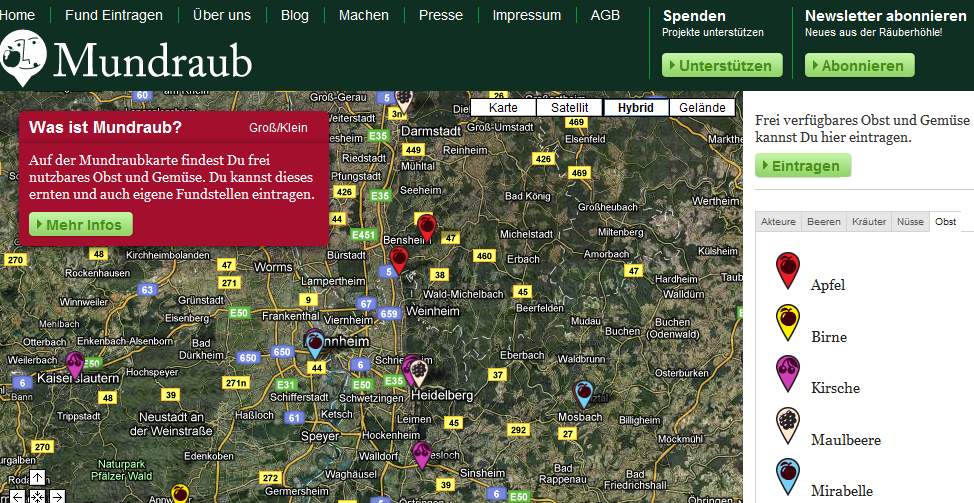 While most of the 150 press articles about the mundraub initiative focused on “fruit for free,” most users are strongly committed to the idea of sharing and crowdsourcing.(2) They are far more concerned about contributing than in getting something for free. They tag trees, discuss botanical issues and recipes connected to local fruit. Perhaps most importantly, fruit-pickers tell splendid anecdotes about the find spot.

Indeed, the information about the location of free fruit trees, property rights and some how-to rules provided on mundraub.org helps Mundräuber to jointly overtake responsibility for the fruity abundance. It’s wholly self-organized, and beyond the market and state in the very ways described by the Ostrom school. Nevertheless, we still have a long way to go: To conserve common fruit trees in the long run, regularly cutting the fruit trees and replanting young ones will be necessary. But the first move towards our common fruit has been made.

1.In German, “Mundraub” – literally, “mouth robbers” – refers to the theft of something edible in a strict legal sense, but the term has friendly, joking connotations, as implied by “filching” or “pilfering” in English.

2.In this context, crowdsourcing means the collaborative and self-organized collection and management of information about common fruit trees by a large number of self-motivated actors interacting on mundraub.org, most of whom are unknown to the website operators.

This essay originally appeared in The Wealth of the Commons.

The Commons Strategies Group (CSG) is a partnership to help advance the commons as a paradigm in diverse settings -- both in theory and practice. Working on four continents, we

The Commons Strategies Group (CSG) is a partnership to help advance the commons as a paradigm in diverse settings -- both in theory and practice. Working on four continents, we catalyze and assist commons-based projects, activism, research and public education with a great variety of partners. Our primary purpose is to help consolidate and extend the many existing commons initiatives around the world. We do this through our partnerships with diverse organizations, research and writing about contemporary commons developments, and public speaking and education. The CSG’s networks of influence reach across Europe, North America, Asia and Latin America. Michel Bauwens, based in Chang Mai, Thailand, is familiar with Asian projects and initiatives and travels frequently to Europe and North America. David Bollier, based in Amherst, Massachusetts, USA, is a veteran of American commons work and Washington, D.C. policy activism, and has extensive ties to Europe. Beatriz Busaniche, based in Buenos Aires, Argentina, is a Board Member of Vía Libre Foundation and a leading free software/free culture activist in Latin America. And Silke Helfrich, based in Jena, Germany, headed the regional office of the Heinrich Boll Foundation for Central America, Mexico and the Caribbean from 1999 to 2007, and speaks frequently in Europe and Latin America. We believe that commons offers great hope for the future because it provides practical, effective forms of governance and resource management that can address the growing failures of centralized, hierarchical institutions and the market fundamentalist order.