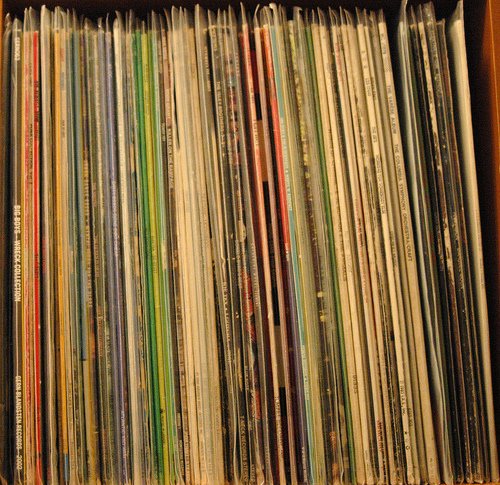 It’s hard to believe I am quite this old, but when I arrived at college in 1987, I came toting an electric typewriter and a bottle of Wite-Out. I envied the students with the newfangled electronic typewriters that had an LCD indicator that showed the words they were typing before they were actually committed to paper, giving you about a sentence’s-worth of changing your mind. My head swam at the luxury enjoyed by the very rare classmate who wrote his or her papers on a word-processor, antecedent to the personal computers that were still a decade away from ubiquity. You could hear these students in the dorm, printing their papers on dot matrix printers, the “vvvtt-vvvtt” sound more alluring and indicative of status than the sound of the sweetest sports car. I suspected they were rubbing it in, when they would bring an accordion stack of paper into class and casually tear off the perforated strips from the sides.

My own papers—and I still have some of them—were zebra-striped with thick ribbons of chalky Wite-Out, and even some fragments of sentences obliterated with x-es. Despite these limitations, I did some of my best writing in college. It was wild and exhilarating for me, knowing that what ended up on the page was likely to be it, unless something was so wrong or so in need of a rewrite that I would start over from the beginning. I think my brain worked differently then. My thoughts seemed less ambiguous and malleable. I was certain and strong in my feelings and opinions, and it was easier, as a result, to write with such finality.

But a computer introduces doubt. I rethink everything. My computer is a doorway to an entire world of collective input. What should inspire confidence inspires humility, of feeling like a very small voice among many. I used to keep reams of paper journals—and I still have them—but I have lost everything digital I wrote before the advent of the Internet. I wasn’t even careful enough to hold on to those big ancient disks in hopes I’d be able to translate their hieroglyphs someday. My writing felt more important when it was instantly put to paper, and coasting on the strength of first drafts out of sheer laziness became point of pride. It’s probably the only thing that got me through college, actually. Maybe it’s all attributable to the humility that comes with age, but I think it is, at least in part, the medium that changes the message, for me. I used to paint elaborate calligraphy on a wall, and now I write my words on a fogged window with a finger, the whole world visible on the other side.

Something similar is true for vinyl vs. digital music. Up until my mid-20s, I had a turntable stereo for the shelves and shelves of LPs that I hauled from dorm room to apartment to rental house. I could heft each one and slide it into space by either chronological or alphabetical order depending on my whim at the time. Watching the edges of the older cardboard covers rub and fray, seeing the white paper inner sleeve yellow with age, folding and refolding the liner notes and promo posters. When I was about twelve, I discovered and coveted a Simon and Garfunkel boxed set that cost over thirty dollars. I wrote the dollar amount on a jar with a Sharpie and added to it slowly, week after week, with babysitting lucre. When I finally earned enough to pay for it, I brought home the maroon box with the raised writing and matte pebbled surface and held it on my lap while I listened; sometimes I would read and re-read the titles and dates like a holy meditation.

I can now carry that boxed set in my pocket. I don’t know where any of my actual records are. I let go of them long ago. I had several hundred of them; they were heavy and very hard to move and store. It would be impossible and intoxicating for me to imagine that one day I would store my entire music collection in a small cell phone carried with me at all times. There are things that I miss about the way we did it before, though. Like many, I bemoan the loss of the mix tape. I’m not really sure why we can’t translate that whole concept into the digital realm, but mixed music seems to have lost its simple romanticism. For those of us with strong connections to music, there was no better way than a mix tape to woo someone, or to chart a stage of a relationship, or to wallow in a breakup.

The other day, I brought my new laptop to the library and connected to their wifi. After a few minutes, my computer alerted me in a friendly way that a nearby user was temporarily accessing my entire music library. Thousands and thousands of songs, the things that built me, a more personal view of who I am than a written autobiography. I wasn’t bothered; I like to share. But if you compare that surprising experience to the intimacy of a mix tape, it was like some sort of clumsy nudity in an unexpected location. I was caught without a towel to cover me, and had to lie there under scrutiny. As a child, when I heard a song I loved, I would clench my fists and press them against my closed eyes while I listened. It was a personal experience, and my bliss left me feeling shy and vulnerable.

It wasn’t easy to skip songs on a record, back then. Skipping songs, in the days of LPs, meant getting up. Getting up and dealing with that fragile playing arm and the precision of the needle. There was an unpleasant noise when you did it wrong. When you bought an album, you were committing to that specific artistic arc of the performer, and records were often made to reflect that commitment. Do they make “concept albums” anymore? You listened the way you might eat a carefully prepared, multi-course meal. I’m pretty sure I listened differently then.

I expect things to please me more quickly now. I will even make a playlist of my very favorite songs, and while I listen to it I will skip ahead from track to track in impatience. Not good enough. Not good enough. Not that one, either. One of the songs on a Wilco album I love had a droning, repetitive intro, and I skipped it with no mercy until one day, I finally didn’t. It might be my favorite song on the album now, but I had to listen beyond the first twenty seconds.

Something as recently uncommon as a DVR quickly became the default for TV-watching, for me. It raised that expectation of pleasure up high again, and I quickly was spoiled into never watching anything unless I had made the effort to record it and really, really wanted to give it part of my selfishly-guarded private time. Now we get maybe eight channels, via elaborate wiring strung up through the house and out a second-story window. Sometimes I invite a friend or two to watch a show during its actual broadcast time, and we sit on the couch and drink beer or eat ice cream, and, during commercials, we talk, use the bathroom, or chase the kids around the backyard.

It’s hard to go back to where we were, technologically. I do not miss the age of LPs and cassettes, really, and have no desire to go back to hauling steamer trunks full of vinyl from place to place. I miss typewriters and the freewheeling confidence they inspired in me, and of course I miss the sensual realities of hammers striking paper to leave inked indentations. There is no reassurance anymore of that kind of (literal) impact of words on paper.

What I have now, instead, is a chorus of peers, an endless accessible context to everything, and a million voices surrounding me that have an immediate effect on my thought processes and attitudes. I am sorry we’ve had to give up cable and the DVR as our economic fortunes declined, but in exchange I’ve gotten a release from television as a solitary indulgence, and can revisit its social elements. I’ve never been a sports fan, but I’ve always envied that sort of camaraderie, sitting on the couch together and shouting in unison. The last time I was at the gym on a treadmill with a monitor, there was a row of three or four of us watching the same episode of a real estate show on HGTV. Something eyebrow-raising happened, and all of us gasped and looked up at the mirror in front of us, made eye contact, and smiled with amazement, together.