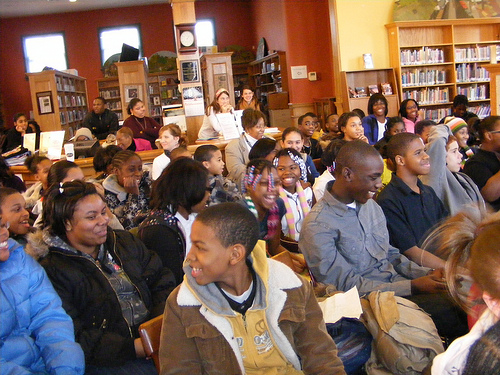 Have you heard? There’s a new hot-spot in town. It’s a museum, digital hub, community resource center, art space and provider of free and open access to information. It’s the picture of shareability and it’s right through the doors of a library.

While library systems rework their methods of information delivery for an increasingly electronic world, libraries themselves have become go-to places for work, study, community, computers, education, pleasure reading, and quiet.

“More people are coming to the library than ever,” says Micah May, Director of Strategy at the New York Public Library (NYPL), explaining that last year the NYPL saw record high numbers, with 18 million visitors and 24 million items circulated. 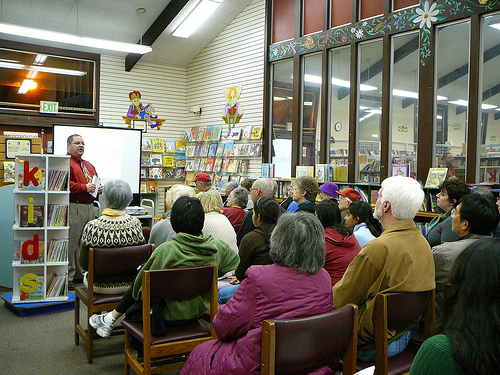 Photo by the San Jose Public Library on Flickr.

Many libraries offer cultural programs such as art exhibits and musical performances, community-building events, multi-lingual and ESL events and computer classes that range from operational basics to digital media and programming. While libraries around the country have classes in business software, the Internet and social media, some branches, such as the Skokie Public Library in Illinois, have become creative workshops, offering classes in GarageBand, digital photography, Photoshop and more.

One of the great challenges and strengths of libraries is their commitment to stay abreast of the changing needs and demographics of their communities and adjust accordingly.

“What we’ve learned about libraries is that they fill a really important role in the community by providing an inviting space for people of all backgrounds,” says Molly Raphael, president of the American Library Association (ALA). “They’re important for creating understanding across different cultures and pulling elements of the community into the space.” 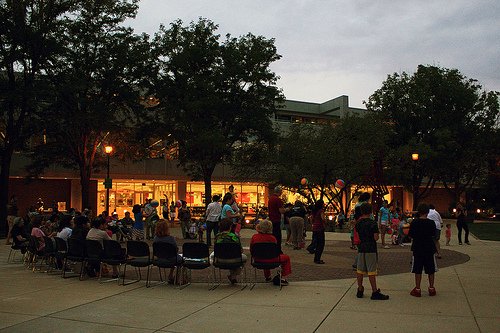 She offers the library system in Queens, New York as an example.

“The Queens system has a larger percentage of people who have been in the U.S. less than 10 years than any other place in the country,” she says. “It’s a very highly-used system that’s great at helping immigrants learn how to navigate in their new country.”

“We’re paying a whole lot of attention to who is delivering the service,” says Raphael. “Having bilingual staff and doing cultural competency training means that people feel more comfortable coming in, which allows the libraries to reach into communities.”

While libraries share common elements, branches are all different and serve different communities. The Grand Central Library in New York is a quick turnaround branch, a get-in, get out type of place. A branch in the suburbs or an urban neighborhood, however, is more likely to be a place where people go to spend stretches of time, a public luxury that is increasingly difficult to come by.

“With economic pressure reducing the number of private sector alternatives such as Borders and coffee shops,” says May, “libraries remain non-commercial, no-pressure locations people can come to.” 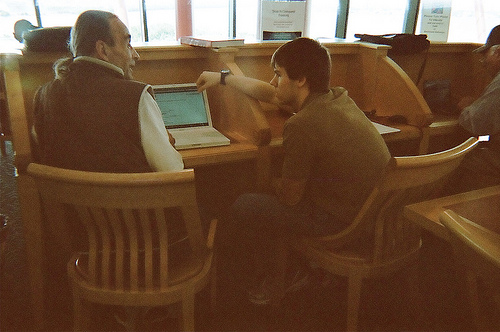 Libraries are also dedicated to keeping teens involved in library programs and activities and provide a safe, third place to go with targeted activities and areas set aside for them.

“Teens really want to be separate from kids and adults,” says May. “It doesn’t have to be elaborate or costly, just something apart.”

A free remedy for social and creative isolation, libraries are good places to go to get work done, offering a way to tap into the group productivity dynamic that has made co-working so popular.

“Libraries are important spaces for communities to gather,” says May. “There’s an intellectual energy that comes from hundreds of people working.”

He points out that libraries have special collections that aren’t available electronically and that information online is limited, often existing behind pay-walls.

“Even if everything was electronic, libraries would provide a way for people to get to it for free,” May says. “Libraries provide more than you can get at from your home computer.”

As libraries work to keep up with a changing society, the thing that has become increasingly clear is that there is not a one-size-fits-all model for branches. 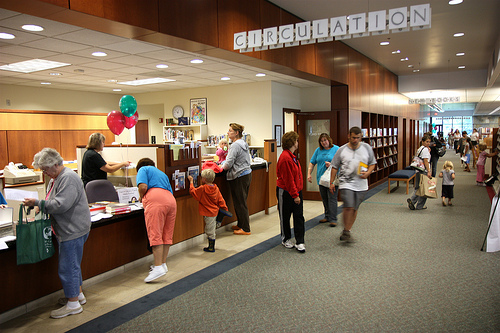 “There are some important issues for libraries to sort out,” says Raphael. “I see libraries trying to make decisions about how much to invest in the physical space versus the virtual space. There’s no question that the virtual space is going to gain dramatically,” she continues, “but not to the point where physical libraries will disappear. I think there could be different models.”

While simultaneously reworking their information delivery methods and seeing increased visitation and circulation, many library systems have been hit with crippling cuts to their budget. They’ve reduced hours and staff to bridge the budget gap, but inevitably, some branches have been either slated for closure or closed.

When the Charles Village branch in Baltimore was closed despite public outcry, the community came together and worked out a deal to lease the building for $1 a year if they were responsible for staffing and running the library. This provided an opportunity for the community to re-think what their library could be and the Village Learning Place (VLP) was born.

The VLP started out with no materials and built their collection from scratch. They retained none of the previous staff and relied heavily on volunteers to help with everything from a building remodel to the shuttling of new books into the space, and input into library programs. 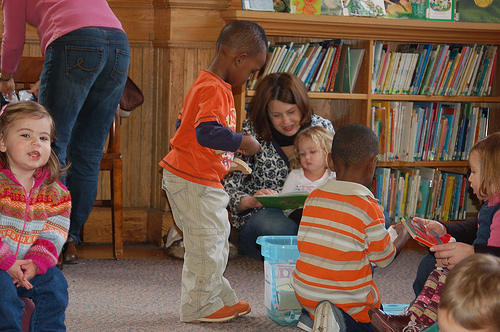 “From the beginning the community knew that they wanted a circulating library,” says Liesje Buckley Gantert, Executive Director of the VLP. “But they wanted to adapt and have programming that would meet the needs of a diverse community that goes from toddlers all the way to seniors.”

Covering their operational costs through grants and donations, the VLP, which was initially volunteer-driven with a small paid staff, has steadily increased funding and paid positions over the years and now has 24 paid staff members. Two grants of $1 million each from the 21st Century Community Learning Centers Program have allowed it to expand into a second building across the street.

A symbol of community pride, the VLP has a lending library and a community garden. It provides after-school and summer programming, and offers classes, workshops, lectures and events to support people of all ages in fulfilling their potential.

“It’s amazing that the community had this vision of a resource that would be available and open as a neighborhood nexus,” says Gantert. “That’s what libraries are talking about now and this was back in 1997.”

With some library branches increasing their focus on e-materials, others prioritizing their community offerings, and many trying to strike a balance of the two, libraries have some big budget and information-delivery questions to work out. Far from going away, they are as relevant to communities as they have ever been; perhaps more so.