Mental health services for the people, by the people - Shareable
Skip to content 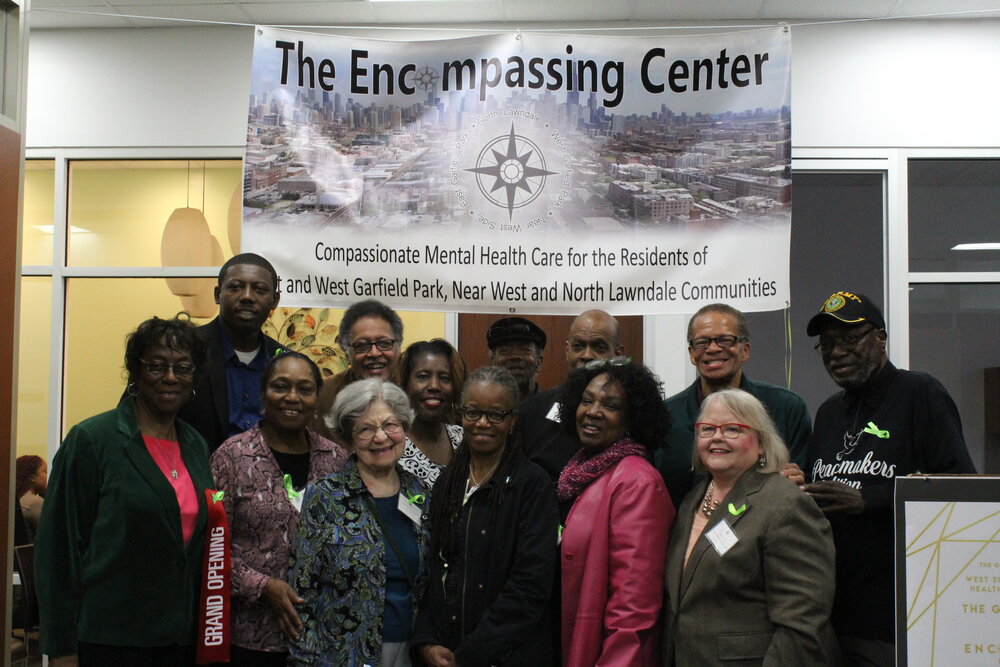 In April 2012, Chicago’s former mayor Rahm Emmanuel closed half of the city’s 12 public mental health centers. The closures affected mostly Black and lower income locals, who were no strangers to disappointing legislation. In fact, the mayor’s blow to their existing social safety net was just the latest instance of socio-economic and political disregard. Decades of inequity and disinvestment, lack of job and educational opportunities, housing injustice and more had been met with unfulfilled promises of social programming that came and went with grant funding.

After years of frustration, West Side residents in the North Lawndale, East and West Garfield Park, and Near West Side neighborhoods, decided they’d had enough. Instead of waiting around for a solution, they would create one—from the ground up. The result was Chicago’s Encompassing Center.

Sowing the Seeds of Change

Centrally located to public transportation, the Center opened in the fall of 2019, but collective efforts had begun years earlier. In 2016, the Coalition to Save Our Mental Health Centers (CSOMHC) approached Father Larry Dowling and a few of his parishioners with a proposal to open a community-focused, community-created mental health center on Chicago’s West Side.   The Coalition spawned from a citizen’s initiative to contest Mayor Emmanuel’s earlier directive. In a show of organizing triumph, they’d led a successful grassroots campaign to pass legislation allowing any Chicago community to open its own Expanded Mental Health Services Program (EMHSP).

The Encompassing Center would be their second victory. Their first success story came while helping Albany Park, a north side community, open their own community-based mental health service, The Kedzie Center.

Under the direction of the Coalition and the Institute for Community Empowerment (ICE), an organizing and leadership training group, West Siders from four parishes and other organizations knocked on doors, petitioning residents for support of a community-controlled mental health center.

“We needed 2800 signatures to get a referendum on the ballot to reply to two prompts ‘yes, we need a mental health center’, and ‘we are willing to increase our property taxes by four percent to pay for it’,” Father Dowling said. “We managed to get 10,260 people to sign our petitions.” Once on the ballot, the referendum received a 86.5% vote in favor of the measure.

The foundation had been laid, but navigating community members’ well-founded suspicions of traditional medical treatment would take some work. The effort required the Center’s developers to utilize a more holistic, empathetic view of mental health—one that honored folks’ lived experiences while providing them with the necessary resources to get better.

“We realized mental health is not just about diagnosis, talk therapy, or medication,”  said Jennifer F. Smith, Program Director at the Encompassing Center.

“It’s also about safe housing, adequate food, lack of opportunities, and overcoming fear or shame for having to rely on social services, like utilizing a food pantry. To fully support our clients, we can’t ignore the situations that make them anxious or unstable, so we connect them to the various other services they need.”

We realized mental health is not just about diagnosis, talk therapy, or medication…To fully support our clients, we can’t ignore the situations that make them anxious or unstable, so we connect them to the various other services they need.— Jennifer F. Smith, Program Director at the Encompassing Center

In addition to the three major mental health services, the Center also partners with Rush Day Hospital to offer psychiatric services for which client costs are covered by the Center. Center therapists and counselors work with community parishes, churches, organizations, and even individual residents to determine where help is most needed.

“We can help a couple that just wants to learn better communication skills, or  we can connect someone with severe schizophrenia to a residential treatment program. Anyone in the community can reach out and request what’s needed for their particular area, anger management, a trauma book club, or talks about depression, grief, and loss. Whatever the need, we will put together the tools, programming, and staff to respond to their requests,” Smith said.

The Center, which occupies a 6000 square foot space, operates on an annual budget of approximately one million dollars. The budget is funded by a property tax assessment of four percent of every $1000 collected from the four communities the Center serves. Eighty-five percent of the budget is allocated for direct services to residents.

The Encompassing Center’s staff includes a substance abuse counselor, five therapists, a clinical supervisor, a program director, a receptionist, and a communications professional. In the two years since their doors opened, they’ve seen over 400 patients, and partnered with numerous groups on programmatic opportunities and community outreach.

Like many other establishments, the Center’s reach and impact was thwarted by the Covid-19 pandemic.  They were forced to switch to tele-mental health in lieu of face-to-face therapy. Currently,the tele-mental health option remains, though in-person, and programmatic services are also available. Looking ahead, Smith expects the number of clients they see to multiply exponentially.

The Center’s nine-member governing board ensures a steady, dependable flow of mental health services by providing necessary operational and financial oversight. Janice Oda-Gray, president of the Center’s  governing board, recalled a reporter who cautioned her about believing the Center was failproof, just because it’s funded by property taxes.  Impressed by the operation, the reporter said he’d seen “good things like the Center come and go” due to misappropriation of funds, Oda-Gray recalled.

“That stuck in my head,” she said. “So every year, I have this long end of the year speech to the Board about how critical that it is to be fiscally-responsible. West Siders are under a lens, and they’re looking at us much stricter than any other organization because they expect us to fail. But we won’t. We will make sure that we’re above board and using funds as they are meant to be expended.”

That the operation remains locally funded is of chief importance to West Siders, many of whom are wary of outside organizations that traditionally swoop in with patronizing attempts to “save” West Siders.

On a separate occasion, Oda Gary was approached by a resident who had read a news article that incorrectly reported the Center was funded by the Archdiocese of Chicago.

“I told him that was totally untrue,” Oda-Gray said. “Yes, we worked with the Coalition to Save Our Mental Health Centers , which is partially funded by the Archdiocese. And, yes, we contract Chicago Catholic Charities to staff our therapists and other positions.But the Center is funded by the community and paid for by our property taxes.” Hopefully, it always will be.

Hopes for the Future

Smith calls The Center’s potential “limitless”, adding that she’d like to see staff and services increased.

Last October, the Center celebrated its second operational year, and neighborhoods, like Little Village, Bronzeville, Englewood, Roseland, and Austin, are using the Encompassing Center as a template to open their own community-controlled mental health centers, according to Father Dowling.

Oda-Gray hopes to see an extension of the Center’s work in the form of satellite and mobile mental health centers, to address the needs of people who are transportation-challenged or who fear leaving their immediate neighborhoods.

Overall, the team  wants to obliterate the stigmas and other barriers that prevent local residents from seeking the care they need. As Smith iterates: “We treat the brain like it is a separate organ whereas if we have high blood pressure or heart issues we will turn to a cardiologist in a heartbeat. We will go to our OB-Gyn or the eye doctor, but the brain is the one organ people shy away from when it’s just as important to take care of our minds as we would any other part of our body.”

Father Dowling agrees. “Twenty or thirty years ago, I was struggling with anxiety and depression and reached out and got help. It really changed my life and turned me in a whole new direction,” he said. “It’s why I’m in the ministry today because [getting that help] helped me refocus.”