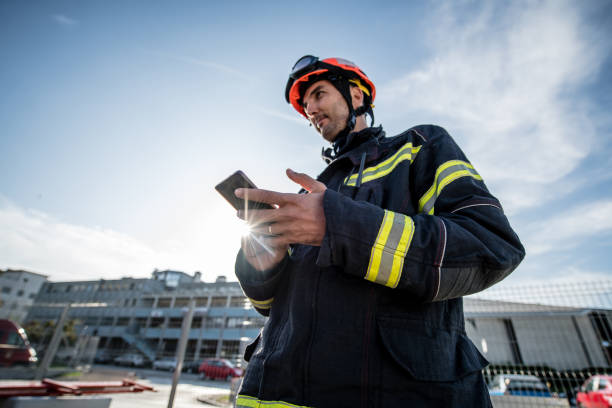 Like many people, John Mills relocated during the pandemic, moving full time to his ranch in Sonoma County after years as a Silicon Valley entrepreneur. The move didn’t just take him away from the hustle and bustle of California’s tech capital, though: It took him to the heart of fire country.

When the Walbridge fire ripped through northwest Sonoma County last year, Mills’ home was threatened, and he spent hours each day checking for updates on Facebook and Twitter, which were exploding with messages from concerned homeowners just like himself. CalFire, the state’s major firefighting administration, only provides updates about once a day, leaving municipalities–and individuals–to fend for themselves in between. Concerned citizens keep their ears glued to radio scanners and blast out updates to their social media followers, sometimes numbering in the thousands.

But Twitter and Facebook were never designed for the type of information distribution that massive wildfires require. As a long-time technologist and software engineer, Mills wanted to help. So, he got to work. “All I wanted to do was build these guys a bigger microphone. I am not trying to change anything about how they operate, just give them a platform.”

With the help of a volunteer team of “citizen information officers” and other software engineers, Mills built Watch Duty, a free app for real-time wildfire information that currently provides updates for Sonoma, Napa and Mendocino counties. Within days of its August 2021 launch, Watch Duty had over 22,000 active users. Most of the citizen information officers who work with Watch Duty had large followings on social media, and brought their audiences to the app.  “I’ll be out somewhere and hear our push notifications go off in people’s pockets. It’s incredible,” said Mills.

The trick to Watch Duty is its simplicity–the app sends push notifications to users with the latest information on fires uploaded by their vetted citizen information officers. Beyond that, the user interface is basic. “Our product is doing well, because it’s super simple. It doesn’t cost much to operate,” said Mills.

At the heart of Watch Duty are the organization’s citizen information officers, or CIOs, most of whom are local to the regions that they provide updates for. They post on the app as they find information through their own research, utilizing public forums, aerial photography and radio scanners. As long time experts, Watch Duty’s CIOs are well respected experts with roots in the community. “These guys are the trusted voice of these communities, and they tell everyone, ‘We’re building this app. You should get on it,’ so it just exploded,” said Mills.

Watch Duty is designed to be accessible even to people who aren’t tech savvy themselves, like the elderly or those without reliable internet access. “We’ve gotten thousands of letters, telling us people feel safer, that they don’t have to be on social media all the time searching for information. It’s alleviated some anxiety for people,” said Mills.

Watch Duty isn’t just used by citizens, either–firefighters themselves rely on the app to get the latest information from other agencies or regions. Mills makes it a habit to attend town hall meetings and other public forums and work alongside authorities. The approach has gotten positive feedback from the firefighting community. “Every firefighter I met mentions it. They all use it,” he said.

Mills relies on his team of experts to check information and make sure that the notifications sent to the app’s users aren’t just current, but accurate. Unlike social media, the information gets vetted before it’s broadcast. “Just because we hear something on the radio once, we don’t post it. We wait to hear it a few times at least, because we are trying to be a reliable source of truth.”

The operation is so far a resounding success, though maintaining it isn’t without its challenges. Without any paid employees, the organization has limitations. Compared to previous tech companies Mills has created or worked for, Watch Duty is scrappy and bootstrapped–not to mention, short on funds. “We need more people, more time. But our volunteers have jobs, they have homes and mortgages and kids,” said Mills. Because most of the software engineers who work on Watch Duty have day jobs, they pull a second shift at night to work on design and programming updates. Mills works evenings as well.

Despite the hurdles, Mills plans on expanding to other areas soon, ideally reaching the entire state by next fire season. The app’s capabilities are also set to expand. They’ll soon launch a feature that enables citizens to post approved photos (first vetted by Watch Duty’s CIOs) to the growing platform. For Mills, the experience has been eye opening and inspiring. “I’ve never built anything like this before. I usually build things like enterprise software, seemingly unsexy things. It’s been truly explosive in the best way. I am so glad it is helping.”

Watch Duty can be downloaded for free on the App Store or on Google Play.

Check out these related articles and resources: