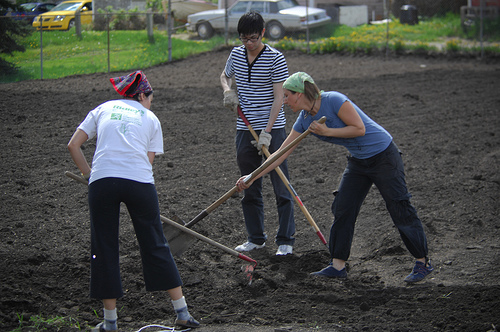 I never had the tech chops to be part of the hacker culture, but as one whose living depends on collaboration and the sharing of ideas, I was struck by a recent post, "Walled Gardens vs. Makers," by Cory Doctorow, science fiction author, activist, journalist and blogger, and the co-editor of Boing Boing.

Doctorow begins the piece by reminiscing about how exciting it was when he was "a grub" and could gain "hidden knowledge" from fellow hackers–everything from how to fold an origami crane to how to shut down a Commodore PET by typing in a partiular address. Through his computer, and through books like The Whole Earth Catalog, Doctorow tapped into a community of socially-conscious thinkers who would later become the movers and shakers of the nascent Internet culture. As he writes:

The knowledge diffused slowly, and each newly discovered crumb was an excitement and cause for celebration.

Today, as a nearly senescent 39-year-old, I look back on that period with a kind of wonder and dismay. I knew ten interesting things I could do with the gadgets, devices, and materials around me, and I thought myself rich.

Doctorow likens his pre-internet wisdom to "book fanciers of the Middle Ages who might, in a lifetimes, amass five or ten books and think themselves well-read." Now he is part of a vast sharing culture:

When I invent or discover something, I immediately put it on the net. And when I find myself in a corner of the world that is not to my liking, I Google up some hack that someone else has put on the net and apply it or adapt it to my needs.

Making, in short, is not about making. Making is about sharing. The reason we can make so much today is because the basic knowledge, skills, and tools to make anything and do anything are already on the ground, forming a loam in which our inspiration can germinate.

Using Apple's rigid control over app developers as an example of a "walled garden," Doctorow fears that such practices will put us "back in the forbidden-knowledge Dark Ages — the poverty-stricken era in which a mere handful of ideas was counted as a fortune."

It's unlikely that any one of us can single-handedly stem the development of other walled gardens, especially when powerful economic interests work against us. But together we can continue to create (metaphorically speaking) community gardens in which we plant ideas, methods, constructions, opinions, chores, money, even lifestyle tips. By sharing, we all become richer.