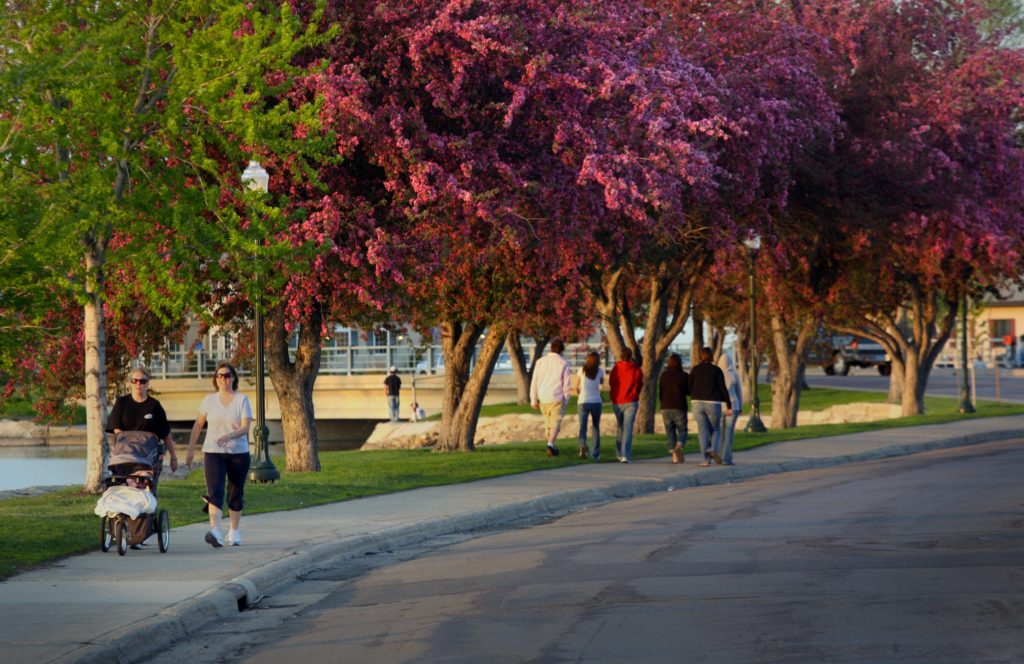 It’s like a small-town scene from Norman Rockwell, updated for the 21st Century.

A Latino family strolls leisurely through the park, immersed in conversation. Coming up fast behind is a blonde woman in designer exercise gear and earplugs, intent on maintaining her power-walking pace. Bringing up the rear is a young man with his husky, both of them staring up at a patch of sun that has appeared from behind the clouds.

In real life, this is Albert Lea, Minnesota, a town of 18,000 working to prove that healthy lifestyles like walking and good nutrition are not just big city things. “We’re not a resort town or a college town, we’re an ag-based rural city promoting healthy living because it’s the right thing to do and it’s how we want to live and want our children to live,” explains Ellen Kehr, a former city council member who is a leader in the effort to make Albert Lea healthier.

It’s mistakenly assumed that no one in smaller communities walks, except between their pick-up truck and the Walmart entrance. Actually, walking is far more common in smaller communities across the country than people think. In towns of 10,000-50,000, 8.5 percent of all trips are made on foot, second only to “urban core” communities, according to the U.S. Department of Transportation’s National Household Travel Survey. In smaller towns 2500 to 10,000, walking accounts for 7.2 percent of trips — higher than in most suburban communities.

Albert Lea in many ways resembles Garrison Keillor’s Lake Wobegon. It’s a place “where the women are strong… and all the children are above average.” That fits with goals local citizens embraced in 2009 when they adopted a community-wide approach to wellness laid out in Blues Zones, a best-selling book by National Geographic Fellow Dan Buettner, which examines places around the world where people live longest and healthiest.

What they’ve accomplished over the past five years offers both lessons and inspiration for smaller towns and cities across the U.S. “The idea is to make the healthy choice the easy choice,” says Buettner, whose new book The Blue Zones Solution chronicles the progress in Albert Lea together with other community success stories around the world.

Blue Zones is now launching a second phase in town, in partnership with Healthways, a Tennessee-based company focusing on well-being improvement solutions.

Around one-quarter of adults in Albert Lea participated in the first Blue Zones project, along with half of local workplaces and nearly all kids in grades 3-8. Encouraging everyone to engage in more physical activity was a chief thrust of the campaign, which was funded in part by AARP. 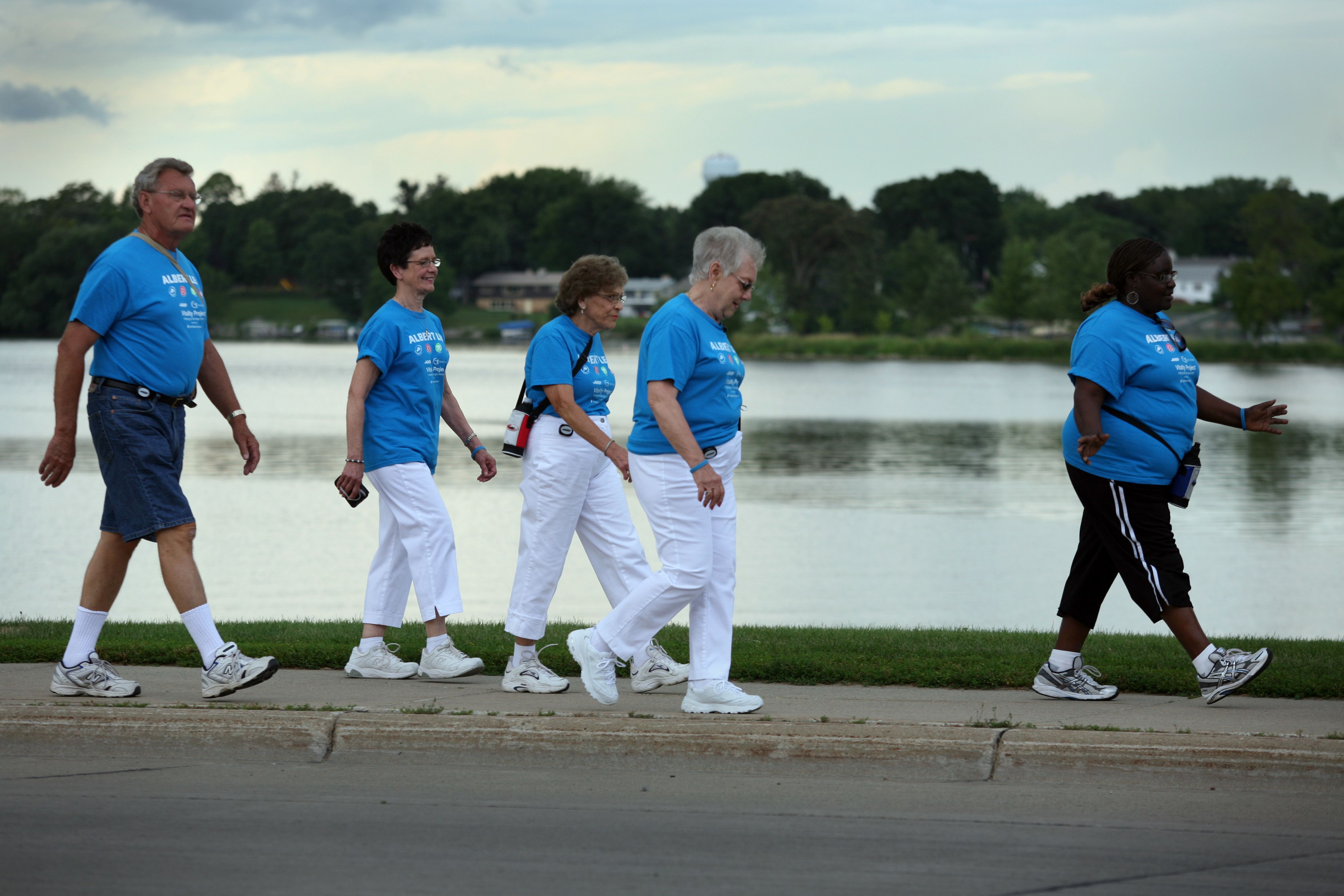 It appears to have worked. Even on a gray, chilly weekday afternoon, the new five-mile trail around Fountain Lake draws more walkers and bikers than you’d expect in a town set among soybean fields of southern Minnesota. The downtown, which borders the park, is filled with people on foot heading between the bank, the library, the kitchen store, clothing stores, churches, schools, restaurants, and — in a perfect Prairie Home Companion touch — the Sportman’s Tavern, which advertises “cabbage roll hotdish” as the daily special.

Walking has increased 70 percent in the last five years, according to pedestrian counts conducted by the National Vitality Center, a local initiative working on the community health campaign. Smoking has also dropped four percent, and Blue Zones participants collectively lost almost four tons of weight, notes Buettner. Residents formed about thirty groups to walk or bike together regularly, nearly half of which are still going strong five years later.

City Council member Al Brooks, who now walks two-and-a-half miles every day, credits the campaign with big improvements in his own health. “When I started four years ago, I had high cholesterol and high blood pressure. Now my cholesterol is lower, my blood pressure is 116/70, and I lost 15 pounds.”

After being launched in Albert Lea, the Blue Zones idea has now been taken to Fort Worth, Texas; Naples, Florida; Southern California; and across the states of Iowa and Hawaii.

Albert Lea’s impressive health gains are paying off in many ways. Good Morning America broadcast live from the shores of Fountain Lake to tell the country what was happening here — part of a wave of media attention which is valuable to the town’s future prospects, says City Manager Chad Adams.

Adams stresses that a lively, walkable community is key to attracting businesses as well as the families and young people that Albert Lea needs to thrive in decades to come. Briana Czer, a young bank manager who moved here a year ago, thinks this strategy is working. “I like how walkable Albert Lea is. When people walk more, they socialize more. That helps connect everyone and makes me feel more part of the community, ” she says.

So how exactly did Albert Lea get more people back on their feet walking, especially in a rural region where driving is deeply embedded in the fabric of everyday life?

It was a combination of: 1) creating a public education campaign about the health advantages of physical activity; 2) organizing people into informal social groups to walk or bike regularly; and 3) making the city’s streets and parks more safe and appealing for pedestrians. Here are some of the accomplishments:

-A community-wide focus on physical activity — enlisting civic organizations, businesses, schools, public agencies, the media, and citizens — offered continual reinforcement for people to get out and walk. “It has reconnected our community in a way that I never thought possible,” notes Randy Kehr, executive director of the Chamber of Commerce (and husband of Ellen Kehr). “Sociability is as important to health as exercise and eating.”

-Walking groups, which serve as an incentive to get off the sofa, even when you feel lazy or it’s freezing outside. This makes physical activity a social occasion to look forward to. In Albert Lea, walking groups are generally 4-10 people committed to walking together 3-7 times a week.

-Downtown was made more walkable by widening sidewalks, eliminating unnecessary traffic lanes, restoring diagonal parking, replacing some stoplights with stop signs, and “bumping out” sidewalks into the intersection, which shortens the crossing distance on busy streets.

-Sidewalks were added to six-and-a-half miles of city streets in strategic locations near schools, senior centers and businesses.

-A bikeway along Front Street now connects a state park to downtown and a commercial street on the city’s west side. Bicycling has risen 74 percent on the street, according to the National Vitality Project’s count.

“Small towns can reinvent themselves as places faster than big towns,” explained Dan Burden — one of America’s foremost authorities on walkable communities — to a roomful of city, county, and state officials at Albert Lea’s City Hall working on further improvements for the town.

Former Bicycle and Pedestrian Coordinator for the State of Florida, Burden is the Johnny Appleseed of urban vitality, who has brought ideas for walkability and livability to over 3500 North American communities in the past 18 years. He helped Albert Lea citizens map out their original healthy cities strategies in 2009 as part of the Blue Zones team, and has now returned for the new phase of work as the organization’s Director of Innovation.

“When I first came into Albert Lea, I’ll be honest, it looked like the downtown was closed,” he admitted to the local officials. “There were businesses but there was no life in the streets. That’s changed now. Albert Lea, I am proud of you.”

Albert Lea is part of the wave of smaller communities around the country showing that walking is not just a big city pastime:

Jay Walljasper writes, speaks, edits and consults about creating stronger, more vital communities. He is author of The Great Neighborhood Book and All That We Share: A Field Guide to the Commons. His website: JayWalljasper.com.