Liquid Democracy: The App That Turns Everyone into a Politician - Shareable
Skip to content 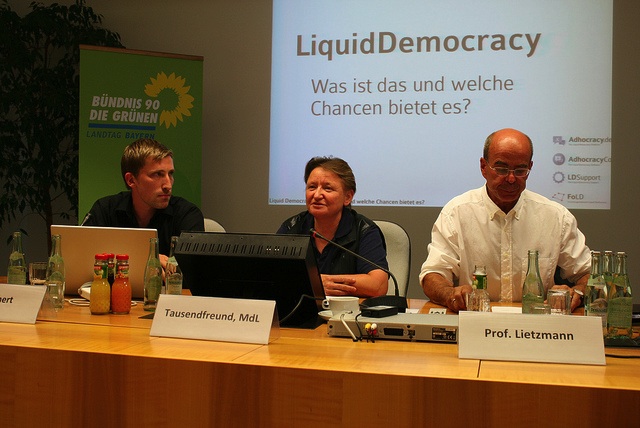 Photo by GrüneFraktionBayern under a Creative Commons license from Flickr.com.

Liquid Democracy is one of the boldest contemporary innovations in democratic decision-making. The idea uses web technology that allows users to interact in new ways. Its primary innovators are located in Berlin, and Germany has been the first to adopt and apply Liquid Democracy systems in the context of political parties, parliamentary processes, and some organizations.

Liquid Democracy has a number of key features. In the Liquid Democracy system, a party member can assign a proxy vote to any other member, thereby assigning a personal delegate, instead of voting for a representative. A member can give their vote to another member for all issues, for a particular policy area, or for a particular decision only for any length of time. That vote can be rescinded at any time. Under this system, a person can become a delegate for multiple members within a polity very quickly, wielding the political power normally reserved for elected representatives as a result. But a person can lose this power just as quickly. This is the “liquid” in Liquid Democracy, a process that can also be referred to as “transitive delegation.” If someone is respected as a trusted expert in a particular area, they can gain members’ votes. As a result, every person within a Liquid Democracy platform is a potential politician.

In one of the software systems, any member can also propose an idea. If enough other members support the idea, it moves on to a discussion phase, where the proposal can be modified or alternative proposals can be put forward. Of the proposals that are offered, those with enough support are put up for a vote. A vote is made using the Schultz method of preferential voting, ensuring that votes are not split by almost identical “cloned” proposals. All of this is done online.

There are a number of critical issues within Liquid Democracy applications. The first question is whether a party will make the Liquid Democracy process a binding one—where member votes on the online platform become real law—or use it for reference—where member votes merely inform existing representatives. The second question relates to transparency: Will users disclose their identities, retain anonymity, or use a hybrid system of authenticated pseudonymity?  The third question pertains to whether liquid (or transitive) or direct votes are used.

The idea for Liquid Democracy is not new. Lewis Carroll, the British author of Alice in Wonderland, was the first to propose the idea for transitive voting in a thesis titled “The Principles of Parliamentary Representation.” Only with the advent of computer technology, however, has the technical necessities for creating such a complex and dynamic decision-making system become possible.

Not surprisingly, hackers and programmers in Berlin were talking about the possibility of creating software for a Liquid Democracy political process well before the software was developed. Around 2008, Berlin’s hacker culture held the sentiment that some kind of liquid system of political decision-making was imminent. The question was who would develop it first.

The second organization, Liquid Democracy e.V. uses a software called Adhocracy, originally designed by programmer Friedrich Lindenberg. Liquid Democracy e.V. is an NGO currently headed by Daniel Reichert, working together with a robust team of project managers and developers who apply Adhocracy software in a number of different contexts.

Interaktive Democratie e.V. sees transparency within the platform as a sine qua non of any application of the software. They also consider the liquid delegation of proxy votes to be a core feature of Liquid Feedback that should not be scuttled. In addition, they do not see the software itself as a platform for deliberation, but rather as a tool for decision-making. If a group wants to deliberate on an issue, Interaktive Democratie e.V. suggests that people use social media platforms to do so, not Liquid Feedback; they do not think of their product as a replacement for live or online deliberation, but believe that the Liquid Feedback system should complement the interaction between people who already know each other—or are at least contextually familiar—instead.

Liquid Democracy e.V., on the other hand, does not see the liquid delegation of proxy votes as an absolute necessity (it can be switched on and off depending on where it is applied). In addition, the Adhocracy software is designed for public deliberation, rather than voting (although it is still possible). Adhocracy includes features such as a collective editing function, where a script or text (filmic or policy) can be deliberated and dynamically developed. Users can be anonymous and it’s not an absolute necessity for people to know each other outside of the Adhocracy platform.

These two organizations with their two distinct software systems have given rise to a number of applications of Liquid Democracy systems.

Liquid Feedback has been universally adopted by the German Pirate Party as a tool for deepening the party members’ level of political engagement. The German Pirate Party applies the Liquid Feedback software at different levels and in different regions. In other words, their national Liquid Feedback platform is different than their regional platforms. At the national level, Liquid Feedback is still a reference system; actual policy and representative voting processes use a paper ballot. Efforts have been made to use Liquid Feedback to make binding policy decisions, however the issue is currently at a deadlock, with a powerful group of anonymists within the party blocking the way toward a fully transparent and binding system. However some chapters at the regional level have adopted a binding Liquid Feedback system. The Berlin Pirates are currently in the process of making their Liquid Feedback processes politically binding as well. At this time, there are certain legal obstacles related to electoral law that still need to be overcome.

In addition to its application within political parties, Liquid Feedback has also been used at the county municipal level in a region of Germany called Friesland. The pioneering Council of Friesland enlisted the help of Interaktive Democratie e.V. to apply Liquid Feedback in their decision-making process, which is now called “Liquid Friesland.” Liquid Friesland has been running for several years. It gives local community members a way to propose policy ideas and directions, which are then voted on by people using the software. Only people who are legal residents of Friesland are allowed to join the software platform; authentication systems have therefore been devised to weed out non-legitimate users. Liquid Friesland is primarily a reference system. Community member votes are not binding policy for the county. Instead they primarily inform the Council decision-making process. The system has the dual function of allowing community members to propose ideas and enabling the Council to announce their decisions.

In addition to the Pirates and Friesland, the Italian Five-Star Movement has also applied Liquid Feedback. With 25% of the national vote, the Five-Star Movement is currently a significant political force for change and a serious adopter of Liquid Feedback. Outside of Italy there seems to be little written on the movement’s experience with the system, so it is an important area of further investigation.

Liquid Democracy e.V. has used their Adhocracy  software in a number of contexts, including government and various youth development and youth inclusion projects. The highest profile example is its application within the Enquete-Kommission Internet und digitale Gesellschaft des Deutschen Bundestages (Federal Parliamentary Commission on the Internet and Digital Society).

Enquete commissions normally include 17 elected representatives working in conjunction with 17 experts. In this particular case, those who established the commission to investigate the impact of the Internet on society decided to use a participatory platform that would enable citizens to provide feedback because it would enrich the commission’s findings. They believed that the experience of using the platform would also provide its own form of commission “findings.”

Adhocracy has been applied in a number of other areas, including, for example, youth inclusion projects where youth are encouraged to give their ideas on local community development.

Other applications of Liquid Democracy

Other reports have pointed toward the application of Liquid Democracy software by the German Slow Food movement as well as the Germany company Synaxon AG.

This research has been funded and draws upon work done at Leuphana University’s Centre for Digital Cultures as part of the Grundversorgung 2.0 Project. The author would like to acknowledge co-contributors to this emerging knowledge pool: Volker Grassmuck, Nicolas Mendoza, and Thomas Olsen.

Dr. José Ramos is a social change researcher, trans disciplinary collaborator, and advocate for commons oriented social alternatives. Originally from California with Mexican-American heritage, Ramos also lived in Japan and Taiwan before moving to Melbourne Australia. He is founder of the consulting network Action Foresight, and takes part in a wide number of social change projects.