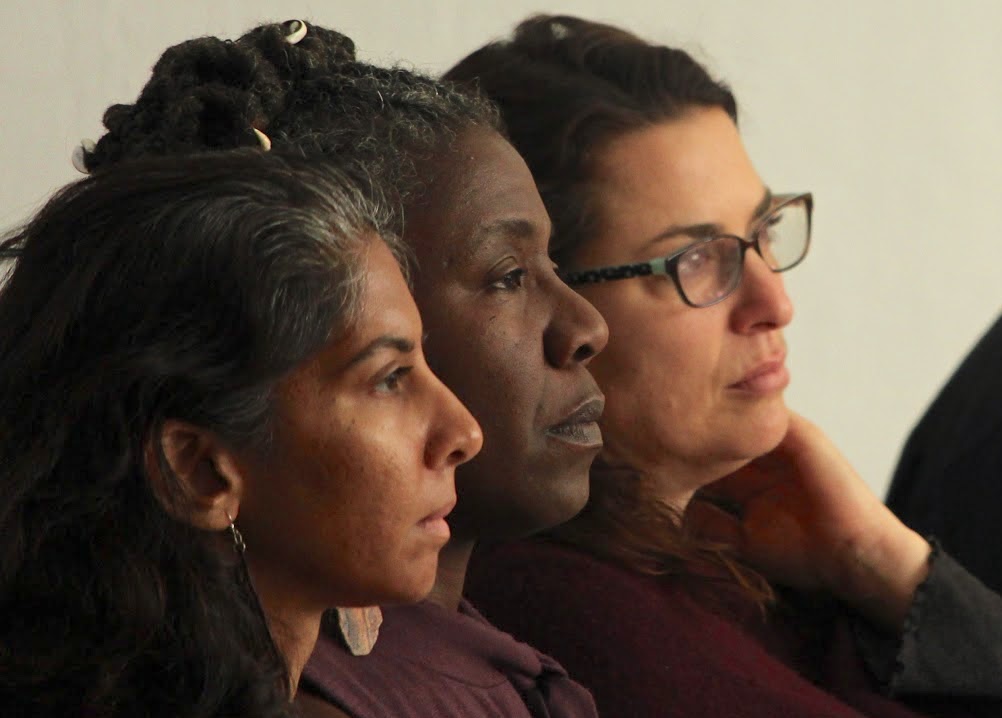 Mai Sutton|November 17, 2016June 23, 2019
The economy can often feel like it’s out of our control — a system that abides by its own forces that we have no power to influence. While business reporters tend to spotlight the rise and fall of stock prices and policymakers focus on gross domestic product (GDP) to push their agendas, these numbers don’t reflect the economic realities of most people. Stock prices may be soaring and GDP may be rising, but a majority of a country’s population may still be struggling to make ends meet. What these numbers succeed in doing is reinforcing the notion that the success of large-scale industries — higher production, more profits — trickles down to everyone through more jobs, higher wages, and cheaper goods. At a time of deepening wealth inequalities and potentially catastrophic environmental conditions, these supposed metrics of success could not seem more out of touch. That’s why community leaders around the world are now building economies rooted in something other than profit and exploitation.
These leaders are creating a world in which access to basic necessities such as food, electricity, and housing are not at the whims of speculative markets. They are launching enterprises based on collaboration and employing business practices that sustain the environment. At the Living the Next Economy Convergence which was held in Oakland, California, we got a glimpse into how these visionaries are building democratic, equitable, and sustainable businesses — and what challenges they face.
Last month's convergence, which sought to address the systemic, pervasive racism in the U.S. that robs people of their dignity and prevents them from achieving economic prosperity, brought more than 300 leaders representing over 100 organizations together for three days of panel discussions, hands-on workshops, and talks. Event organizers also brought 100 youth and grassroots organizational leaders on scholarships. Among the highlights of the convergence was the first public dialogue between Black Panther activist Ericka Huggins and co-founder of the #BlackLivesMatter movement Alicia Garza.
One of the key tracks of the convergence was alternative business models, so there was a lot of open and revealing discussions about cooperatives and employee stock-owned plans (ESOP). There were participants from both nonprofit organizations and for-profit enterprises who offered insights into creating business and implementing business models that value rights of workers. They also shared some of the complex social, political, and financial roadblocks they face while helping to build this new economy. 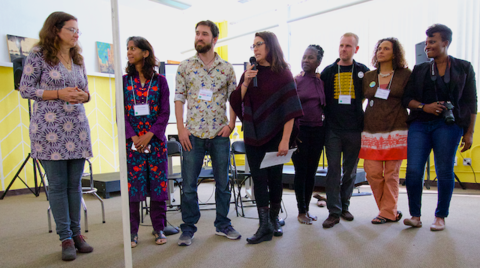 The core organizers of the convergence, including Shareable's Tom Llewellyn.

The Potential and Pitfalls of Co-ops

Many of the conference participants touted the benefits of cooperatives, which tend to value labor rights, environmental protection, and product quality. One of the attendees was from the Democracy at Work Institute, a project of the U.S. Federation of Worker Cooperatives (USFWC). The organization looks to address what’s called the "silver tsunami" problem, which is that 70 percent of baby boomers in the U.S. don’t have succession plans for their small businesses. That means we are headed for a mass closure of locally-owned enterprises in the years ahead. To prevent this from happening, the group is organizing meetings in cities across the U.S. to find viable ways to help these businesses convert to worker-owned cooperatives. The organization believes this problem is connected to displacement and gentrification. Since ownership and leadership in a majority of existing small businesses do not reflect the diversity of where they are based, co-op conversions are one way to expand ownership and entrepreneurship to people from marginalized backgrounds.

Founders and representatives from several co-ops, including New Hope Farms, Loconomics, and Project Equity shared stories about how they organize themselves to divide wealth and ownership and promote community resilience. While much was said about the benefits of co-ops, there were also frank discussions about their limitations:

They can be slow and inflexible in ways that top-down companies are not.
They may not fully erase pre-existing forms of oppression, especially if their members are not actively addressing them.

To counter the second issue, the participants said co-ops can pledge themselves to equity and diversity by implementing organizational bylaws that embed such commitments into the DNA of the enterprise. They said written social contracts could go far in establishing community norms, which are so vital to maintaining a healthy collaborative environment at a cooperative. 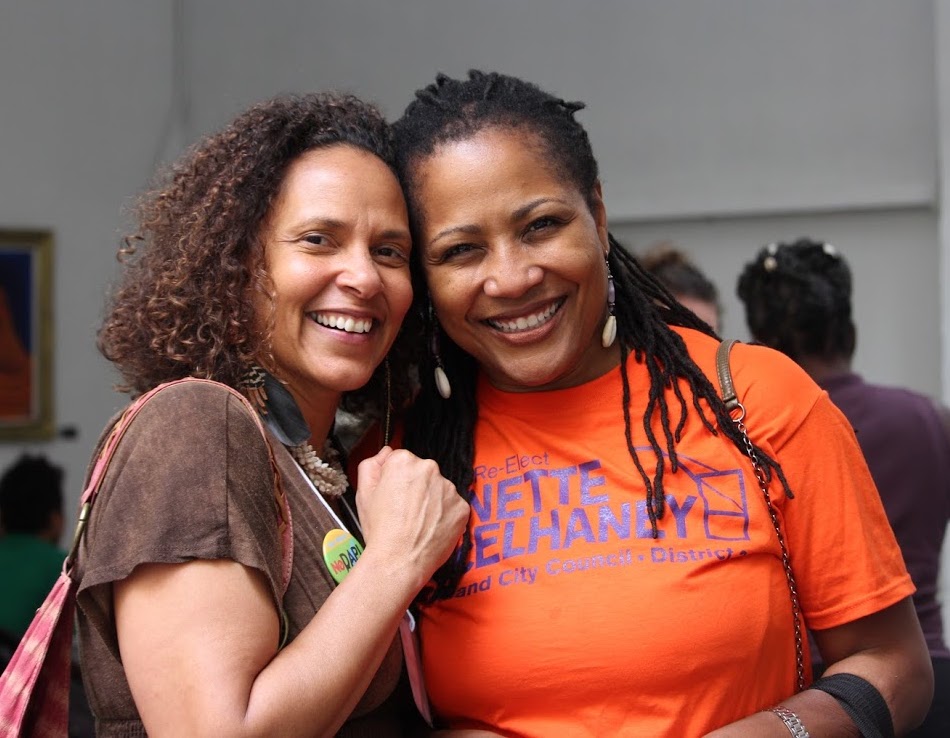 At least two founders of traditional for-profit corporations gave presentations about their businesses. One was Bay Area-based House Kombucha, a family-run fermented beverage company. Their story centered around the challenges of maintaining a triple bottom line — people, planet, and profit — in an economically competitive region.

The Body is Not an Apology is another enterprise incorporated as a for-profit business, but is dedicated to its mission of cultivating self-love and body empowerment. It is a global network that disseminates information about how to love and embrace one’s body, and enables personal and social transformation projects through trainings and webinars. Its founder Sonya Renee Taylor spoke about the constant barrage of shameful and discriminatory stories about our bodies in the media, and how the $60 billion beauty industry exploits these insecurities for profit. She called all of this "body terrorism." The company’s platform is a way for people to protect themselves from this negativity and learn about how to use radical self-love as a basis for social, political, and economic change.

In both presentations, the entrepreneurs expressed how they have been able to create good companies through a strong commitment to their respective missions. They admitted that hierarchical enterprises can sometimes be a much more nimble and flexible model for social enterprises.

One of the panel discussions.

The Environment and Disenfranchised Communities

The relationship between climate change and capitalism is undeniable. An economic system that prioritizes profit leads to reckless extraction of natural resources. At the convergence, many participants pointed to renewable energy as a way to disrupt this economic cycle that’s destroying the planet. Whereas fossil fuels require massive centralized infrastructure to extract, transport, and process its energy, solar and wind power can be decentralized. The representatives from energy enterprises emphasized the potential of clean energy as a means to exercise economic and political empowerment for disenfranchised communities.

Staff from several renewable energy enterprises talked about their models for democratizing access and governance over energy infrastructure. Shiva Patel, the founder of the Energy Solidarity Cooperative (ESC), an Oakland-based multi-stakeholder co-op, discussed how the organization designs and builds solar energy projects and political education programs. The group’s mission is to build community-owned clean energy systems in underserved communities and mobilize non-extractive financing for these projects. ESC works on helping communities move their renewable projects forward, from the initial energy auditing stage through installation and developing financing strategies.

The founder of Native Renewables, an indigenous-led organization working to promote affordable clean energy for Native American communities across the U.S, shared a stunning fact: More than 18,000 homes on the Navajo reservation in Arizona don't have access to electricity. To address this problem, the organization’s aim is to for tribes to own, manage, and provide renewable energy for themselves. Through partnerships with federal agencies, utilities, foundations, and investors, Native Renewables deploys solar energy projects where it's needed the most. The group’s mission is to not only provide clean energy to Native Americans and creative sustainable economic models for power, but also strive to champion the sovereignty and the socio-economic and cultural values of tribal nations.

The discussions about community-controlled energy systems also touched upon how to finance the infrastructure. The current financial system prioritizes investment in big oil projects rather than in decentralized community-oriented renewable initiatives. In order to fix this, the general consensus was that there is an urgent need for more creative models of financing and community financing programs, such as investment crowdfunding, to make renewable power projects viable in the coming years.

A New Way Forward is Possible

Douglas Rushkoff, a media theorist and author of “Throwing Rocks at the Google Bus,” often refers to the economy as society’s operating system, in that it determines how the main components of our social systems function and establishes the basic rules about how we all relate to each other. Many already recognize that our current operating system is broken, but many cannot imagine what could be put in its place.

To most people, this is an alarming problem. But the Living the Next Economy Convergence demonstrated that the failures of the current economy creates an opening. It is an opportunity to apply creative and imaginative solutions to create a better system from the ground up. These leaders are showing the way forward with community-based alternatives, one mission-driven enterprise at a time. They are building them based on a new operating system that runs on trust, resilience, and sustainability, and are showing that everyone can shape the future of the next economy.

Please consider making a contribution to support the growth of next economy initiatives in Oakland. Every little bit helps.