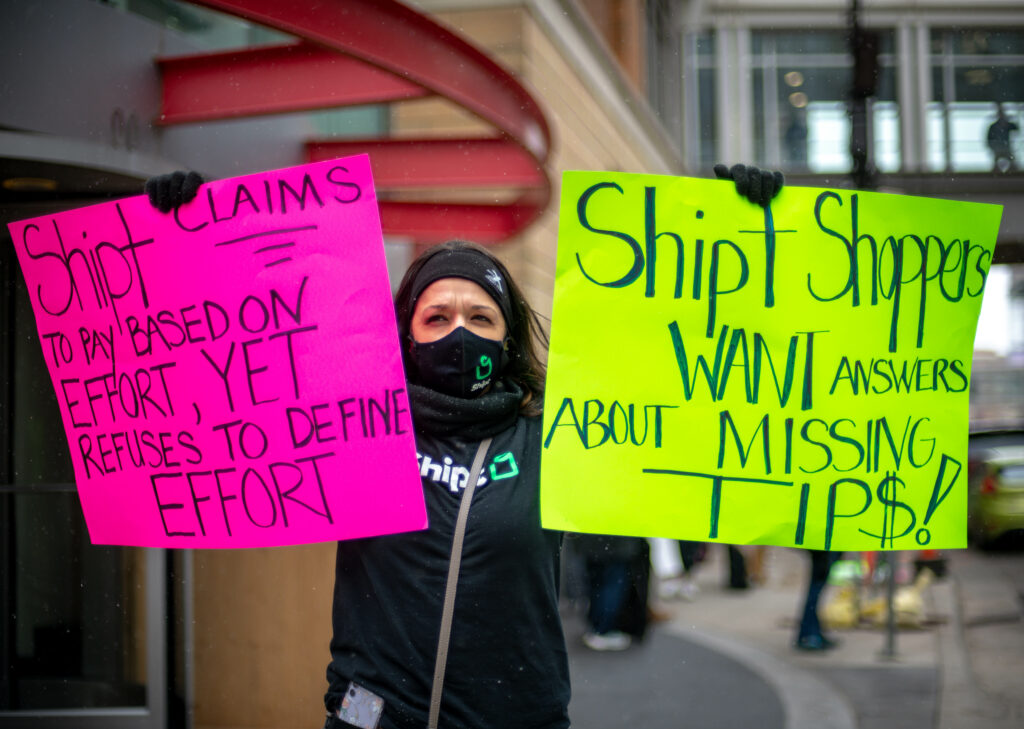 A Shipt shopper-organizer with Gig Workers Collective is seen holding signs at a demonstration demanding the company repay workers' stolen wages. They've collaborated with Coworker.org, the parent organization of The Solidarity Fund, on petitions and data transparency for receipts and tips, but have not received funding. Credit: Coworker.org

From coast to coast, workers are organizing for better conditions.

Grassroots efforts fighting for workers’ rights isn’t new, but the lack of care and support, particularly for gig and hourly workers in the tech industry, has become increasingly obvious over the course of the COVID-19 pandemic.

The fight can feel lonely and hopeless against multi-billion-dollar tech enterprises like Amazon, Uber, Lyft, DoorDash, and Instacart. But organizers don’t have to go it alone — the Solidarity Fund is in their corner.

According to Jess Kutch, executive director of the Solidarity Fund, the Great Recession and the COVID-19 pandemic have spurred a wave of new labor organizing.

“In my lifetime, there’s never been this kind of broad, popular support for the labor movement and workers’ rights,” she said. “Where employers put profit above people’s health and safety, there is a general feeling of workers needing more of a collective voice.”

Formally established as a 501(c)(4) social-welfare organization in 2020, the Solidarity Fund offers legal, financial, and strategic support for worker-activists organizing to improve their companies.

The fund operates under the umbrella of Coworker.org, a nonprofit organization that helps workers organize and win improvements in their jobs and workplaces by providing support and leadership development to workers across a variety of industries. The Solidarity Fund has its own board of directors, though the two organizations currently share staff.

“People need training, connections, and direct financial support as they engage in workplace activism and organizing,” Kutch said. “There is so much to do, and no one currently has the resources to meet the demand.”

Such is that case for the Solidarity Fund. When the organization took applications for its first round of support for worker organizing in December 2020, its available funds were exhausted in less than two weeks.

Call it a success, though. In total, the initial pilot program raised and distributed more than $120,000 to 50 people in the form of $2,500 stipends, paying for organizing assistance — and also a financial lifeline for workers on the frontlines.

“When this grant came in, it was kind of a saving grace for us,” said Erica Mighetto, a stipend recipient and Lyft driver, who began organizing in May 2019. At the time, she was participating in Lyft’s rental program, which required paying for the car she drove for Lyft, dealing with multiple repair issues, and chasing bonuses in order to pay for her vehicle.

“I was just fed up, so I took to the internet looking for Lyft or Uber drivers who were having similar experiences and feeling mistreated,” she said.

Mighetto discovered a community at Rideshare Drivers United, one of the many groups organizing in response to treatment of workers by tech companies.

The tech industry “is known for giving a lot of perks to the workers and high-income levels, so there is an assumption — or at least there used to be an assumption — that workers in that industry didn’t have a reason to organize to build worker power,” said Antonio Aguilera, director of worker resources and training for Coworker.org.

The Solidarity Fund specifically grew out of Coworker.org’s support for tech workers organizing on issues such as ethics, inclusion and equity. Liz Fong Jones, a former Google employee, co-founded the Fund and provided the seeding funding for the first round of $2,500 worker stipends.

These were made available on an application basis to people who currently or formerly worked in the tech industry, regardless of job function.

“Liz wanted to find a way to financially support people who were taking collective action in their workplaces and facing possible retaliation for their efforts,” Kutch said.

The Solidarity Fund is currently raising enough money to cover five more awards before reopening the portal and accepting new applicants for the pilot fund.

“While our pilot fund is focused specifically on people working in tech, we plan to raise and distribute funding for workers in a variety of industries and workplace settings,” Kutch said. She noted that fundraising remains her organization’s “greatest challenge.”

Aguilera, who has worked for Coworker.org for about three years, said those working in the tech industry are markedly different from activist workers in other industries.

Yet, over time, it’s become clear that the processes that supposedly give workers a voice actually do the opposite.

“Those mechanisms were kind of in place to suppress their actual voices and not give a lot of room for dissent,” he said.

As a rideshare driver, Mighetto said her biggest challenge was decreased pay while working against ever-increasing expectations.

“We would receive an email that said ‘we’ve been listening to your concerns and so we’ve made some changes to the app that will help you,’ and inevitably that would be a falsehood,” she said. “I have never worked for a company where my reward for good work is constant pay cuts.”

On the heels of its pilot fund, the Solidarity Fund recently launched the Emergency Fund for Workers at Netflix and Apple to assist workers at those companies facing retaliation for organizing and advocating for better conditions.

Within just a few days of launching, more than 150 people had contributed more than $45,000 to the fund.

Kutch said the short-term goal is to continue to raise and distribute funding for these fights. Long term, the organization hopes to partner with workers to launch funds across industries and workplace settings. Mutual-aid models, she said, “have the potential to generate critical revenue for worker organizing.”

Aguilara explained that this “leadership development process” supports workers that are leading organizing inside tech companies.

Future programs beyond funding include helping people access legal expertise. Access to this type of non-monetary support while organizing is essential for helping workers navigate the complicated grassroots world of activism.

“More than 93 percent of private sector workers in the United States do not belong to a union,” Kutch said, “and the majority of those people have never experienced collective action in their workplace.”

Going up against the likes of Lyft, Amazon, Google, and Apple is, at times, an uphill battle. But, one stipend, one voice, and one protest at a time, the Solidarity Fund is helping workers win the fight against tech companies.

“We are seeing that we do make an impact,” Mighetto said. “We are showing our power. We are getting out there. We are making a difference in this industry.”

Check out these related articles on worker organizing and mutual aid:

JoAnna Haugen is a writer, speaker, solutions advocate, intrepid traveler, international election observer, and returned Peace Corps volunteer. She is also the founder of Rooted, a solutions platform at the 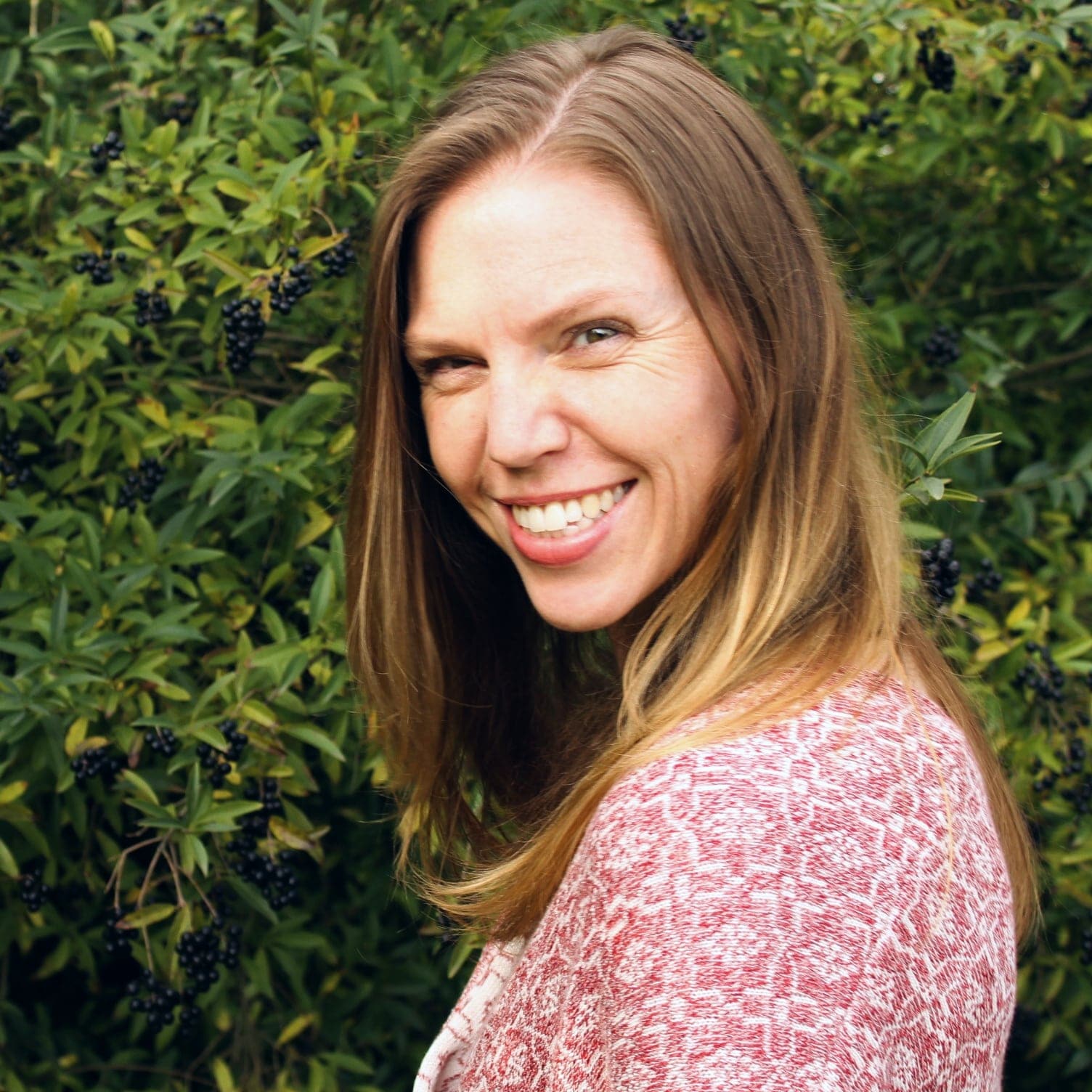 JoAnna Haugen is a writer, speaker, solutions advocate, intrepid traveler, international election observer, and returned Peace Corps volunteer. She is also the founder of Rooted, a solutions platform at the intersection of sustainable tourism, storytelling, and social impact.

Things I share: JoAnna Haugen is a writer, speaker, solutions advocate, intrepid traveler, international election observer, and returned Peace Corps volunteer. She is also the founder of Rooted, a solutions platform at the intersection of sustainable tourism, storytelling, and social impact.