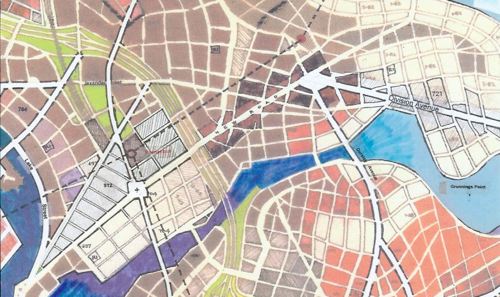 Since 1963, Jerry Gretzinger has been mapping an entire world that exists only in his mind. Part folk art project, part flight of fancy, Gretzinger's maps have enchanted art aficianados and urban design geeks alike. Using an approach that brings to mind Brian Eno's Oblique Strategies, Gretzinger modified a deck of playing cards to include detailed rules for his world-building exercises, and picks one card each morning to dictate what he'll work on that day. Sample cards include a directive to work on a 1/16th scaled map inset, or to begin mapping new territory. Unlike many folk artists who spent their lives toiling in obscurity, Gretzinger's work has been exhibited at museums and bars in the Grand Rapids area, and he sells panels of "real estate" at the shows and online. Gregory Whitmore shot a fascinating short documentary about Gretzinger and his map:

Some detailed photos of Gretzinger's work, from his progress blog: