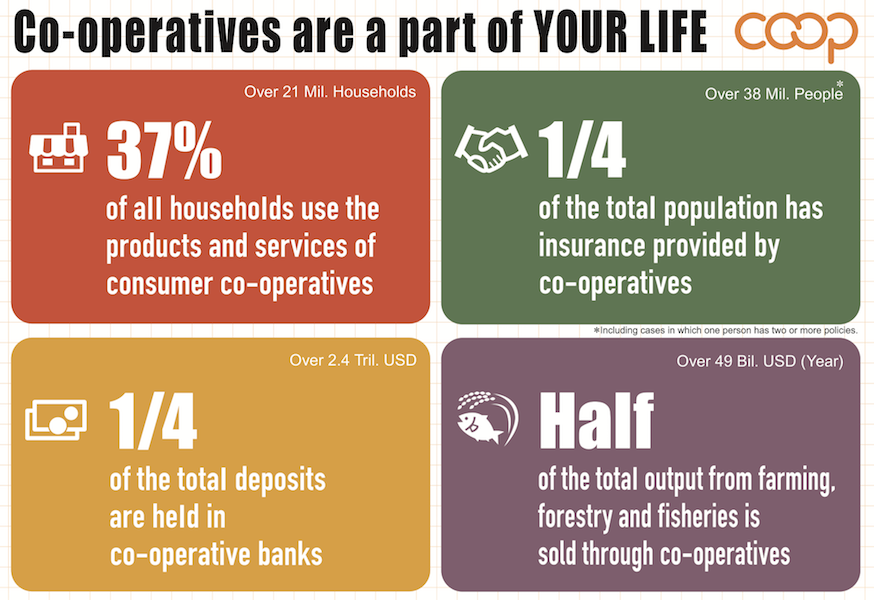 How can cooperatives work together? In Japan, cooperatives have banded together to form the Japan Cooperative Alliance (JCA), an umbrella organization that seeks to promote inter-cooperative collaborations, lobby for pro-cooperative policies, and provide better information and education about cooperatives to the general public.

Japan has one of the largest cooperative sectors of any country in the world. This includes the Japanese Consumer Cooperative Union, the world's largest consumer co-op with over 28 million member-owners, Japan Agriculture (Nōgyō Kyōdō Kumiai), the largest agricultural co-op in the world, and Zenkyoren, the fifth largest mutual insurance co-op.

"In Japan, cooperative movement has over 65 million people as a members, almost half of the total population," says Osamu Nakano, a longtime cooperative movement leader who is now working with JCA. "Our turnover is over 145 billion dollars, and cooperatives in Japan are working in many various sectors."

Cooperatives play a major role in Japan's economy. They are present all over the country, providing insurance and banking services for a quarter of the population, and account for half of the total sold output from Japan's farming, forestry, and fisheries industries.

However, with this scale comes challenges. There is no single law governing cooperatives in Japan. Each industry or sector has a separate law, and reports to a different government ministry. Similarly, before the creation of JCA, cooperatives were primarily organized in sectoral networks, like Japan Agriculture, which counts 694 regional co-ops as members. These networks only came together under two entities — the Japan Cooperative General Research Institute (JC-Soren) and the informal Japan Joint Committee of Cooperatives.

"It had no legal status… just a group of federations," says Maeda. "We wanted to have a stronger secretariat so that we can more strongly cooperate."

Because so many Japanese co-ops are part of various networks, and are often operating mostly outside Japan's two major metropolitan regions, Tokyo and Osaka, there was limited collaboration even at the local level.

"Intersectoral cooperation has not been strong," says Maeda. "We could do more if we cooperate, especially at the local level, to solve local challenges."

Another key role of JCA will be to present a stronger front when faced with challenges from the government. This is especially an issue right now because the current administration, led by Prime Minister Shinzo Abe, is considered one of the most neo-liberal in postwar Japan, and has been pushing for pro-corporate policies. This includes targeting the country's public banking sector, including the privatization of the formally public Japan Post bank in 2015.

The JCA pointed to one example: In 2014, there was momentum regarding revising a law that could have weakened agricultural cooperatives in the country. "One of the key measures incorporated in the revised law aims to weaken the power concentrated in the Central Union of Agricultural Cooperatives, better known as JA-Zenchu, and give more management autonomy to local cooperatives," an editorial in The Japan Times noted.

"The people pushing the government to do this wanted to liquidate the assets that had been accumulated by Japanese Agriculture Cooperative," says Maeda.
Due to opposition from Japan Agriculture and its allies, several of the proposed changes were dropped. Still, it was a wake up call that the cooperative movement could not take its position in Japan for granted.

Bringing together Japan's cooperatives together will be a challenge. Besides the fact that they come from diverse industries, and are geographically dispersed across the Japanese archipelago, they enjoy various working relationships with the ministries that they report to. Even the laws itself present problems, because they limit the ability of cooperatives to collaborate. For example, according to JCA, the law governing consumer cooperatives explicitly prohibits political lobbying or positions.

Still, the strength of the sector means JCA has a huge opportunity to influence policy making and public sentiment. The long term goal for Maeda? To bring a greater voice to the cooperative sector, and allow it to speak to the Japanese public. He aspires to gain the same level of respect for JCA as enjoyed by Keidanren, an association of Japanese private companies that is highly respected on issues of public importance.

"I want to present the cooperative view about the issues people feel are important," says Maeda. "How to work to defend the country, how to react to refugees, how to eliminate poverty… in the future, I hope we can be that voice."