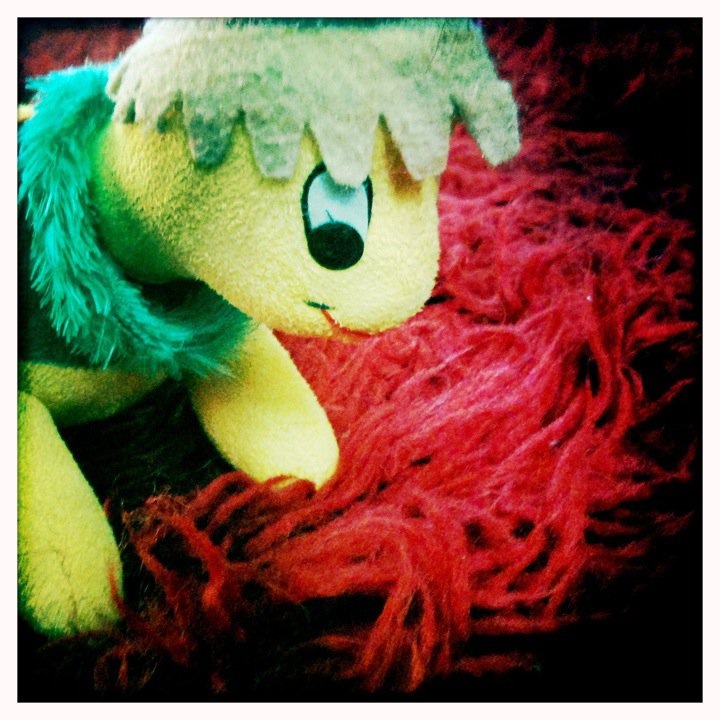 Emily was walking her five-year-old son, "J." home, and we were keeping them company on the journey. I was pulling the kids in the trailer, but peddling so slowly that my bike was wobbling to maintain equilibrium. I was in happy conversation with Emily; she's an artist and a like-minded soul in this suburban enclave.

Children point and smile when they see me riding around town. If I'm in a good mood, I grin back and hold my arm up high like a salute to the sky. If I'm feeling grumpy, I'm just annoyed that anyone thinks it's unusual or worthy of remark to see a flower-bedecked, rainbow-striped retro cruiser pulling a trailer full of children down the side of a busy street. 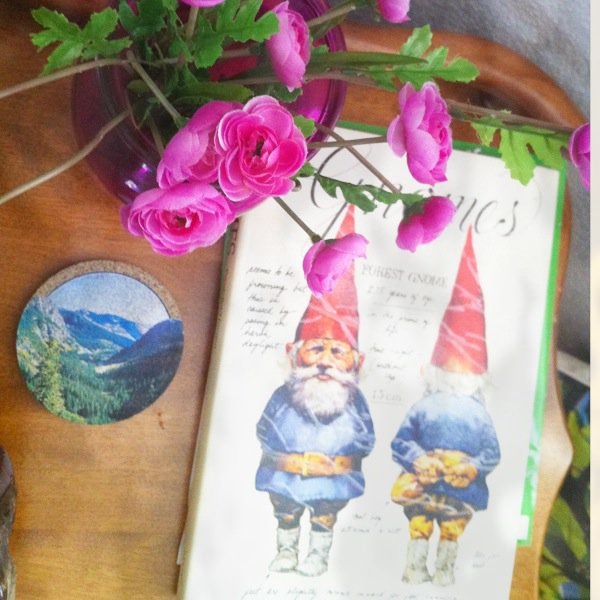 And oh, this challenging winter we've had . . . I can't endure the struggle anymore! Day after day of glittering sunshine, crisp mild breezes, and skies so clear you can glimpse the purple snowcapped peaks of the Sierra Nevada mountain range in the distance, between the strip malls and rows of redwoods.

I keep waiting for my near-teen to announce that she hates me and the jangly sort of lifestyle that has formed around us in these lean times, or at least to be embarrassed by our shabby home and lack of car. It's actually been sort of disconcerting, as she seems to not care at all. Maybe it's because of the circle of support and friendship we have around us. We never find ourselves stranded without a ride if we need one, for example.

So this afternoon, on this fine sparkling day, Emily's son asked, in the guileless way of the kindergartner: "Why don't you have a car?"

"Because they're expensive to own and operate, and we decided we couldn't really afford it if we wanted to stay where we're living."

"No one really does that," J. said, in his lisp that's an artifact of his toddler days, so recently passed. "No one doesn't have a car." 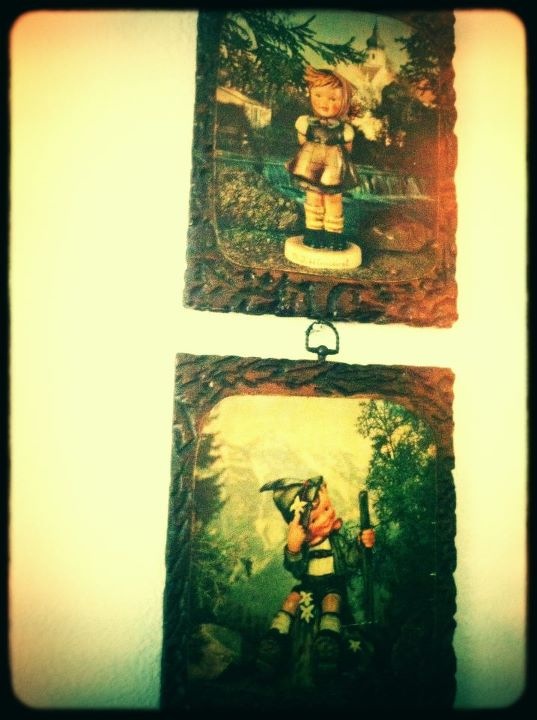 He paused, and Emily had the grace to not fill the silence with embarrassed, polite excusing and correcting. "It's actually kind of weird," he said after some thought.

My children–possibly in a precocious desire not to hurt my feelings, a thought that gives me great parental satisfaction–don't ever say anything like that; they'd censor the word "weird" from their commentary as naturally as we censor "stupid" from ours. I even press them sometimes, gently trying to goad them into confessing the frustrations and embarrassments that sometimes come with being a poor family.

When I was growing up, it was in the most polite corners of suburbia, worlds of genteel middle class-itude, where no one leaves toys in the front yard, paints their homes controversial colors, or parks their cars on the street. I wasn't even allowed to tack posters to my bedroom walls, which were always painted "Navajo White"–a blandly popular neutral–in an effort to maximize resale value. There was the ticking of a clock in the vacuumed living room; you could hear it in the silence like a metronome.

For a few years while I was a teenager we lived in a leafy suburb of metro New York, on the "gold coast" that borders Long Island Sound. I made a friend there (no mean feat when you're an outspoken, acne-riddled wearer of grandpa's overcoat and unflattering vintage sheath dresses) who was also a self-identified writer and social outcast. I remember the first time I went to her house. It was one of those experiences that, looking back, showed me what life's potential held, and it wasn't all painted in Navajo White and at a decibel that wouldn't be heard by the neighbors.

They had a small artful sign decoupaged to their front door, made of letters cut from magazines: "criminals are not as intelligent as other people." My friend's sister thought it both wise and useful as a deterrent. The parents let her glue it above the doorknob! On the front door! Inside, they had a giant black-and-white photograph over the mantle. It was a picture of the older daughter, who was possessed of the most phenomenal head of hair I've ever seen: platinum ringlets, wild and long, dancing around and above her head, down to the dip of her lower back. This picture was of her, clearly topless but discreetly posed from just below her clavicle up to that balletic face and hair that had its own life and will.

The only other art in the living room was framed album covers: Velvet Underground, Neil Young, Frank Zappa. And none of it matched the couch.

In the dining room, they had painted the walls a deep bordello rose pink, and hung dozens of faded old portraits in dark frames, mostly of somber-looking men and women, looking dolefully at the camera. "Wow, are these all relatives?"

My friend and her mother made eye contact and snorted knowingly. Apparently they had bought the whole lot of framed photos of strangers at a yard sale, the same yard sale where they had bought this rather wild paint color. "See? We ran out. They only had one container." The bordello pink ended three-quarters of the way around the room with some half-hearted W- and M-zigzag swipes, before giving over to the putty beige that had been beneath.

I hadn't seen anyone make such choices. We lived all over the country when I was a child; I had attended several elementary schools and two junior high schools in areas as diverse as Oklahoma, Florida, Texas, and New Hampshire. Yet still, my exposure had been limited to the sorts of families who lived the sorts of lives we did, families where there were two cars, tidy garages, well-kept lawns, and tastefully-appointed homes.

I hadn't met any artists, until then. 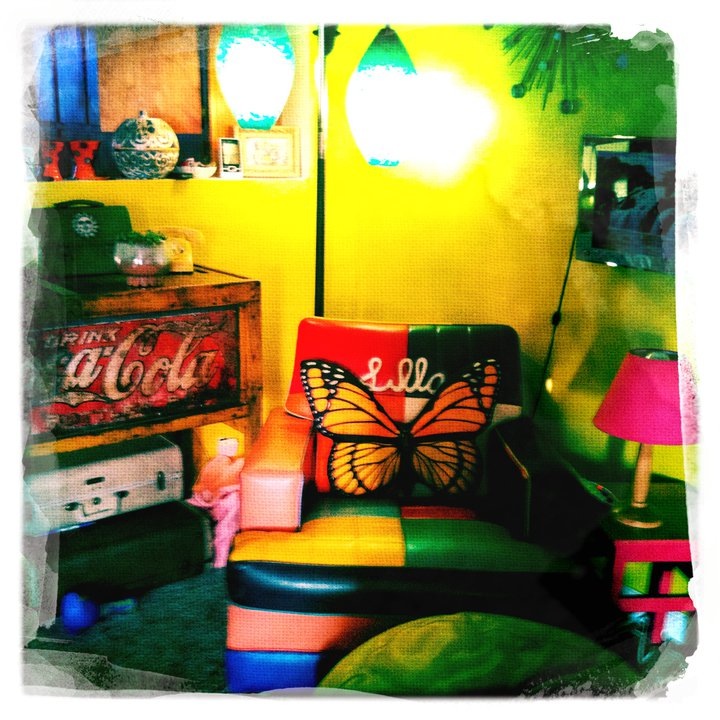 I hadn't met anyone who was bucking tradition, or flying in the face of convention. When I met this family I felt this strong "YES," feeling inside me; it made me feel whole and thrilled and gave me a deeper sense of belonging than I ever remember having felt.

One thing I've noticed since we, as a family, moved out of our tidy suburban enclave and "downsized" to a shabbier existence in line with our newfound financial straits: we are meeting and bonding with more artists, eccentrics, and cheerful outcasts. There is this feeling like we're pioneers in a new sort of Wild West. Bartering is common, urban homesteading is a survival mechanism, and looking and acting "right" for the neighbors never enters the picture. Mostly, the neighbors are weirdos, too: underemployed engineers creating trailer modifications, people giving over more time to their art and their creative impulses because that's all we really have right now.

So today, walking alongside one of my dearest friends, I listened to her son's uncoached commentary. He spoke ingenuously and without hostile judgment. Just this: "not having a car is weird."