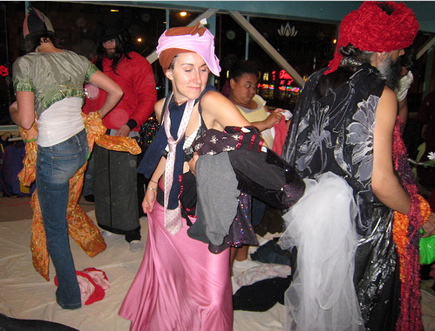 While the runways of the world's top fashion cities shine with glamour of the latest trends, Peers members are coming together in their homes for clothing swaps that demonstrate a different trend in action – the sharing economy. Clothing swaps are becoming increasingly common. As Taylrz from an Oakland PeerSwap describes, “It’s an entire movement.” It's part of groundswell of grassroots sharing that Shareable is calling #SharingSpring.

PeersSwap is a series of member-driven clothing swaps around the world, where neighbors share clothes they no longer wear and trade them for new ones. Coinciding with the beginning of Fashion Week, and running until it wraps up in Paris March 5th, 73 PeersSwaps are taking place in 58 cities and 20 countries. The idea is really simple — sign up to host or attend and everybody brings their gently used clothing to swap. At the swap, clothing is displayed and if anyone finds clothing that suits them, they can take it home. Leftovers are donated to charitable thrift stores.

Online clothes swapping is also becoming hugely popular – there are dozens of new sharing start–ups focused exclusively on clothes in the last few years. Some of the top peer-to-peer fashion swapping sites are Swapstyle, Rehash, Dig N' Swap, thredUP, Closet Infinite. The Huffington Post recently reported that, on average women have 19 items in their closet they are ready to swap, indicating high demand for the trend.

In addition to reducing waste and saving money, face-to-face clothing swaps provide an opportunity to build community through gift exchange. In the digital age, in person clothes swapping is still hot and taking on new life at the ever popular Maker Fairs, with a creative twist called Swap-O-Rama-Rama. This model allows participants to not only exchange clothes, but creatively and cooperatively remake them at the fair with help from artists, tailors, and fashion designers.

Peers definitely found a sweet spot in bringing neighbors together for this common cause. Here's some inspiring stories from PeersSwaps around the world.

Emily Roynestad, who works to preserve tropical rain forests in Columbia, held a swap at her apartment in Bogota. Emily’s event took off on Twitter a few days before the event, bringing together many women who did not know each other beforehand. Emily explained, "Wow, this is taking on a life of its own! Happy to be part of it!"

Yerdle’s Rachel Barge organized their PeersSwap at the Yerdle Headquarters in San Francisco. Rachel brought this pea coat to swap -loved it, but just never wore it anymore. Kim just moved to the Bay Area from Argentina and needed a winter coat. Perfect match.

Showing that the sharing economy can be fun, Production Designer, Teresa Raschilla held a swap at Tres Chic Promotion in Santa Monica, CA that produced this fantastic, superhero inspired outfit. Says Teresa, “We had a ladies Iron Man costume, which was the first item to go! We also had one member who would try on all of her new items together… she ended up in a kilt, track pants, red boots, and a fuchsia coat – all new-to-her!” 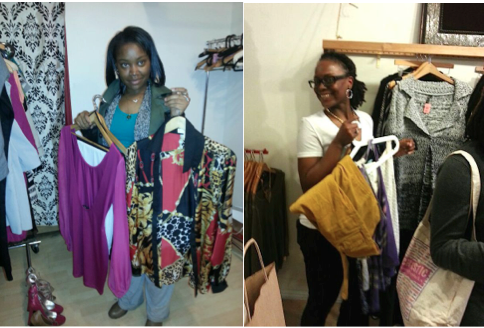 Taylr Jay, owner of Taylrz Joynt in Oakland, California, held a PeersSwap at her boutique. DJ BELLA SOUL spun as folks swapped and talked. Taylr has been holding swaps for over a decade. “I’m so thrilled it’s an entire movement now,” said Taylr.

Poet Astrid Drew hosted a PeersSwap at the Loft on Elmwood, an apartment in a repurposed factory building. Knowing that this event was about more than just sharing clothes, Astrid also helped some attendees organize ridesharing to and from the swap.

Lydia Mann describes herself in perpetual jettison mode, always looking for opportunities for share her underused stuff. After the swap, they had three large bags that were delivered to a local charity.

It's not too late to host one in your 'hood. Sign up for a PeersSwap here.