Is South Korea’s growth-at-all-costs commitment a recipe for disaster? - Shareable
Skip to content 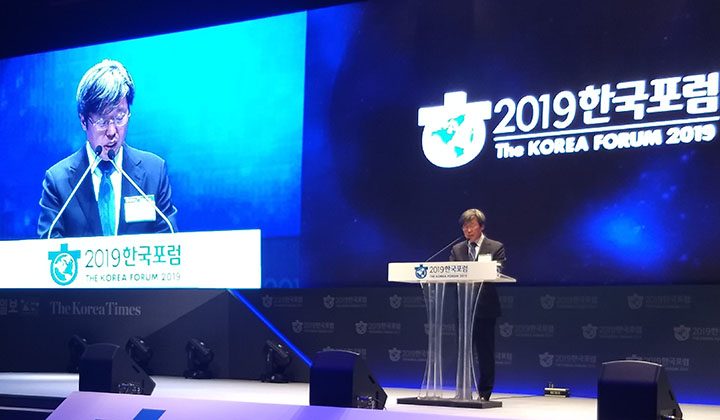 Seung Myung-Ho, the chairman of the Hankook Ilbo, welcomes participants to the Korea Forum 2019 | Image provided by Neal Gorenflo

Will South Korea press forward with an economic strategy focused on technological and commercial growth, or will it confront its growing economic divide and the coming climate crisis with inclusionary policies aimed at preserving the planet?

That was a key question confronting a thousand diplomats, party leaders, academics, top government officials, and other attendees – including one Nobel Prize winner – gathered to debate the future of South Korea at the Korea Forum 2019.

The April 25 event was the latest installment of an annual event co-hosted by The Korea Times and its sister paper the Hankook Ilbo, one of the country’s largest daily newspapers, which was celebrating its 65th anniversary. It was also an eye-opening crash course on the status of the South Korean economy, its challenges, and the aspirations its leaders have for the country.

A key theme was how to increase South Korea’s slowing economic growth rate. Some speakers acknowledged that the spoils of growth should be shared better, but tackling the country’s dismal record on social and environmental indicators compared to other developed countries wasn’t on the agenda. Climate change was scarcely mentioned.

Such growth rhetoric is far from unusual among developed countries, but it’s worth reviewing the roots of this relentless focus in South Korea, which was already a poor country when it was reduced to near ruin during the Korean War. In what is frequently referred to The Miracle on the Han River (where Seoul sits), the nation quickly rose from the ashes to become not just an “Asian Tiger”, but one of the most advanced economies in the world. This ties economic growth to an inspiring national myth.

Wrestling over the vision of a future South Korea

The welcome speech by the chairman of the Hankook Ilbo, Seung Myung-ho, set this tone by expressing concern about South Korea losing its competitive edge during a decade of slowing economic growth. The country’s incredible 30-year economic growth streak only began to decelerate in the new century. Myung-ho stressed the need for structural reforms to accelerate growth and adapt to the Fourth Industrial Revolution (4IR), a wave of powerful new technologies including artificial intelligence, self-driving cars, and quantum computing that promise unprecedented disruption.

Moon Hee-sang, the Speaker of the National Assembly, offered something of a counterpoint, but without questioning the growth narrative. He spoke of the need for a grand consensus to strengthen the social safety net, revitalize local economies, and better share the spoils of a growth economy.

Even as the growth imperative dominated the narrative at the event, some speakers argued, albeit tepidly, that the costs of growth must be addressed.

For example, South Korea ranks near the bottom in the OECD’s Better Life Index and achievement of the UN’s Sustainable Development Goals. Yun Jong-won, Presidential Secretary for Economic Affairs, noted that real incomes are flat or declining as social and environmental costs mount, and he briefly suggested a possible new paradigm where growth is shared and quality of life improved.

I gave one of two speeches to kickoff the last panel, emphasizing the need to invest in people so that all South Koreans were prepared to navigate turbulent times, had the vision and capacity to build a more just and sustainable country, and could better create their own livelihoods. As the country considers allowing ridesharing, I also discussed the negative impact of ridesharing in the U.S. (higher vehicle miles traveled, more congestion, more traffic fatalities, and more) as a warning.

Ridesharing could be a litmus test for the nation’s future

The tensions around ridesharing couldn’t be higher in South Korea. The opposition by taxi drivers is the fiercest I’ve seen worldwide and has tragically included at least three drivers setting themselves on fire in protest. I also offered several possible directions to support labor (platform cooperatives), manage 4IR in the public interest (Cities Coalition for Digital Rights), and create more sustainable communities (sharing neighborhoods and cities). I closed my speech suggesting that South Korea apply the same focus used to recover from the Korean War to tackle the world biggest challenges like climate change.

Jeon Hyun-hee, head of the carpool and taxi task force, later gave an insider’s account of the beyond-bitter conflict between taxi and ridesharing interests. Taxi drivers have stonewalled her and thrown water thrown on her. She said taxi drivers refused to even speak to her for fear they would weaken their position.

I was followed by Lee Jae-yeol, a professor at Seoul National University, whose speech was intended to offer a contrast to mine. A passionate technology evangelist, he painted a picture of an inevitable future characterized by hyper-saturation of technology throughout society, and argued South Korea should lead this move.

In the panel discussion that followed, this theme was reinforced. This created a lively back and forth as I warned that the technological determinism I heard expressed could strengthen authoritarian elements in South Korean society. Panelist Choi Sung-jin, President of the Korea Startup Forum, skillfully countered that tech startup culture is about problem solving by free agents.

I left the conference feeling that South Korea’s economic challenges largely mirrored the situation in other developed countries. Far from being a sign of South Korea’s success, however, that parallelism struck me as profoundly dangerous. The nation’s strong commitment to an economic growth path that doesn’t acknowledge the unique challenges of our times seems suicidal given the seriousness of climate change and approaching ecosystem collapse worldwide.

A report from The Korea Forum 2019