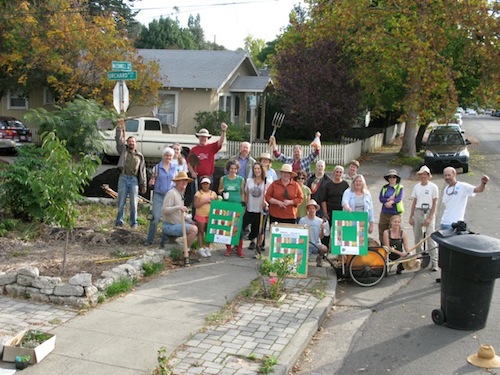 In March 2008, Dustin Zuckerman started a local tool-lending library from the back closet of his small one-bedroom carriage house in Santa Rosa. Zuckerman is a gently spoken man in his late thirties. His friends describe him as the "giving type." He grew up in Los Angeles, the son of pawn brokers, but realized from an early age that the family business was not for him.

“I recognized that I was neither very good at selling nor enjoyed negotiating,” he recalls. Libraries, on the other hand, have long been a passion and fascination to Zuckerman, in the sense of how they give access to knowledge and a ready-made community.

When Dustin was a teenager, a school counselor asked him, “If you could have any job in the world what would it be?” Zuckerman innocently replied, “I would be a doorman. I like opening a door for someone, and the feeling of being thanked.” He now looks back and realizes this desire to engage in small acts of kindness pervades much of his life.

For the past ten years, Zuckerman has worked in different library roles including his current position managing the periodicals department at Santa Rosa Junior College. In his spare time, he used to make some extra money by doing odd jobs for people in his area. He first got the idea for a local tool-lending library around 2005 when one of his clients asked him to put in a garden pathway. The task required a tool called a "tamper." The job paid $50 out of which he spent approximately $35 for the tamper, and $5 on lunch.

“I would not have seen it as such an expense had I known that I was going to use the tamper again,” Zuckerman explained. Figuring there had to be a better way to access tools he needed for one-off jobs, he later went online and typed “borrow or lending tools.” He learned that the Oakland and Berkeley libraries had large tool annexes where you could you check out the tool you needed. Recreating the same idea on a smaller scale for the Santa Rosa community seemed to Zuckerman like “such a simple but brilliant idea.” But at the time, he did not do anything with his flash of inspiration.

A couple of years later, Zuckerman found himself sitting around the house after work and watching a lot of TV. He was bored. He realized he needed a project that would give him purpose, and that would also create a meaningful, lasting legacy. The tool-lending library idea came back to him. 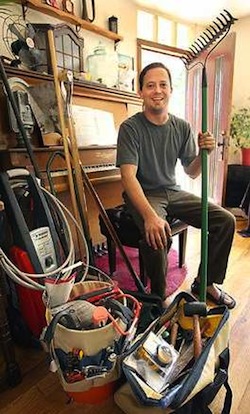 Zuckerman (pictured left) began by gathering 15 of his own tools he had lying around his apartment. In a word document, he made a list of the tools he had and typed at the top “Santa Rosa Tool Library Pilot Program.” He photocopied the document and handed it out to around 30 residents in his neighborhood. People immediately loved the idea and started donating as well as borrowing tools. “It was all very informal at first,” he remembers.

Today, routers, power tools, shovels, painting kits, saws, sanders, are packed into every conceivable spot of his apartment and garage. In a camper van in his driveway he keeps weed whackers, power hoses and other bulkier equipment. He even has a fruit picker and a pole saw. The real turning point for the tool library happened in 2009 when a retired mechanic donated all his automotive tools. Zuckerman, who was now getting on average five borrowers on any weekday and on a Saturday and Sunday upwards of 15 people, realized he had a viable and prospering community resource.

A new study, "Acts of Kindness spread surprisingly easily: just a few people can make a difference," published by political scientist James Fowler of the University of California and medical sociologist Dr. Nicholas Chritstakis of Harvard University, suggests a single act of kindness can influence dozens more. The experiment is part of Christakis and Fowler’s broader research on how a wide array of social ties offer opportunities to influence and be influenced. 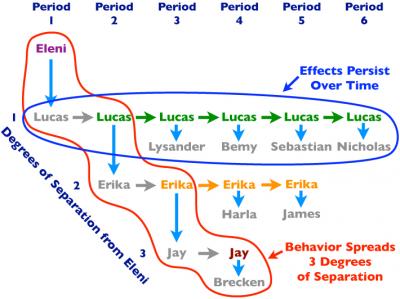 Through a lab simulated “public-goods game,” the researchers showed that when one person gives money to help others, a domino effect of kindness is created—as illustrated in the graph above. One person's generosity spreads first to three people and then to the nine people that those three people interact with in the future, and then to still other individuals in subsequent waves of the experiment. This pattern seems remarkably similar to the dynamic at play in online social networks. One person positively experiencing the benefits of sharing for themselves and for the group further increases the ability and motivation of others to share beyond their immediate connections.

I am fascinated as to whether a similar viral dynamic applies to real world sharing. Can a handful of individuals such as Dustin Zuckerman create a domino effect around community sharing and cooperation?

Over the past two decades, we have experienced how online sharing in one sector breaks the barriers of sharing in another sector. This is partly because technology and infrastructure are making it ever easier to share, and because our motivations around sharing with each other are radically changing. Open source software sharing such as Linux made way for music sharing such as Napster; Napster made way for knowledge sharing such as Wikipedia; Wikiepdia paved the way for the likes of Flickr, YouTube, SlideShare, and Yelp; and these mass sharing hubs created the groundswell for the next generation of real-time sharing channels such as Twitter, and location-based apps such as BlokChalk.

But can one successful example such as tool sharing chip away stigmas and fears, and help make people more receptive to other types of collaborative solutions that benefit a group, not just the individual?

For the upcoming book I have co-authored, What's Mine Is Yours: The Rise of Collaborative Consumption

, I interviewed many community entrepreneurs like Dustin Zuckerman who are pioneering ideas based on shared or collective resources. Their stories are intriguing because of the environmental and practical paybacks they help generate—but also because of the catching social capital that can emerge from one person’s goodwill and collaborative nature.

The Santa Rosa tool library generates widespread tangible benefits from the tools themselves. A community group has been able to plant food gardens in neighbors' front yards (see picture at top). Local residents have undertaken home repair projects that would have not been feasible without the availability of free tools including taking out a whole drive way or repainting a house. But the most fascinating aspect of stories such as Zuckerman’s is how one act of kindness and sharing infectiously spreads into the community. 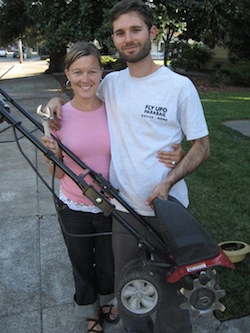 These Are Your Tools

Borrowers will often send Zuckerman a photo of their finished project and a thank you note. To each of his patrons, he asks “How did the job go?” He explains how some people come to the tool library a little closed or cautious at first. “They see it as a business transaction.”

But as they keep coming back, they start telling Zuckerman about their project and this chatter inevitably over time leads to deeper conversations about the vision for the Santa Rosa community in some shape or form.

“One of the intangible benefits of the tool library is community and appreciation,” says Zuckerman. “Patrons often tell me it makes them feel part of something bigger. It’s about far more than the exchange of the tool itself.”

Zuckerman is passionate about how he sees people gradually open their minds, “It’s a growing community awareness and good intentions that has been really infectious.”

“People borrow a tool and they don’t have to give me anything. And they come back and return the tool and don’t owe me anything,” Zuckerman explains. It seems that we have been so programmed to expect to pay or reciprocate that we are almost skeptical of situations and systems where neither is required.

As Zuckerman puts it, “I have to say, 'It’s okay. You don’t own me anything.'” He speaks about how one of the most rewarding aspects of running the library is seeing the “ah ha” moment for people—systems based on pure generosity and trust between strangers can really work.

Indeed, when the library first launched, Zuckerman thought lots of rules would be required to make it run efficiently. There were policies about cleaning the tools, breaking the tools, returning the tools on time and so on. Over the course of the first year, he learned that by dropping policies, people were in fact more honest and responsible around borrowing. Zuckerman believes the rules actually sent the wrong message: “these tools are my responsibility, not the communities.” The absence of rules sends a different message: “These are your tools” and “I trust you.”

Now other shared social systems are starting to take off in the Santa Rosa community. One man has started a clothing library and a mother has initiated a toy library. Another local resident is starting a reading room with all the books and material coming from contributions of local residents. It may be a piece of poetry, a memoir, a short story or whole book someone did not have the confidence or means to publish it. The idea is to keep all these resources in one place so they archived for all to enjoy. Zuckerman believes what is spreading in his community is not just the logic of shared resources but the idea of idea of non-reciprocal exchange; the idea of doing something without expecting anything in return.

Zuckerman story has been covered by various reporters. He relayed to me that the most common question he gets asked is, “Why would someone who is almost 40 do this without any compensation, what’s going on here?” His motivation, he admits, is multi-faceted. “It was driven by self-interest in the sense that I was bored and needed to be proud of something I created.” On the flipside, there is the “joy I get from helping people.” But the unexpected consequence of Zuckerman’s tool library is how his idea of sharing and kindness is spreading to affect the lives of dozens or maybe hundreds of other people he does not know or has never met.

In other words, sharing is contagious!