The rideshare revolution is crippling the taxi industry. That, at least, was the message delivered by Kate Toran, Interim Director of San Francisco Municipal Transit Agency's Taxis & Accessible Services Division, at a presentation before the SFMTA Board of Directors last week. Toran cited a sharp, steady downturn in taxi use in San Francisco over the last two years, from 1,424 average trips per month in March 2012 to 504 in July 2014, a steep 65% decline. She cited additional concerns, including the impact of ridesharing on the environment and on accessibility. The former is yet unmeasured; regarding the latter, Toran pointed to a decline in wheelchair trips and reduced interest in wheelchair ramp medallions. In response to the above, she called for a re-evaluation of all relevant regulations and a joint study with the California Public Utilities Commission (which regulates the state's ridesharing industry) regarding the implications of taxi-rideshare competition. 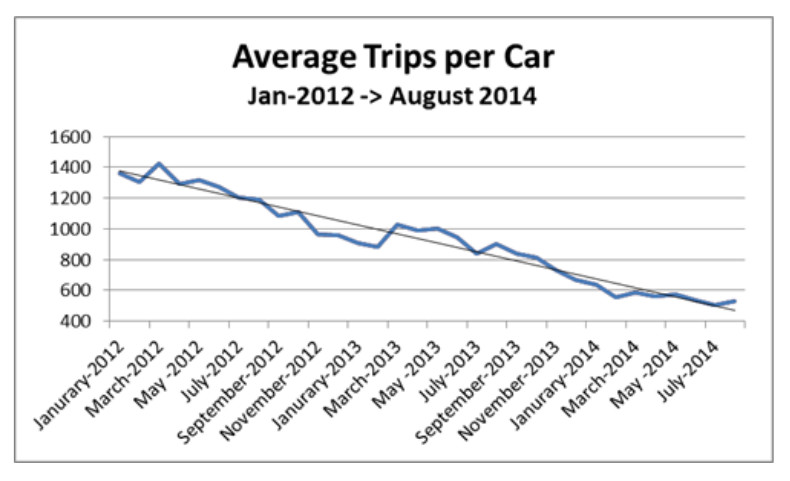 SFMTA recorded a steady decline in taxi use since the introduction of ridesharing services. (SFMTA via San Francisco Examiner)

The Taxis & Accessible Services Division report appears to undermine the argument of an August 2014 working paper from the University of California Transportation Center (UCTC), App-Based, On-Demand Ride Services: Comparing Taxi and Ridesourcing Trips and User Characteristics in San Francisco [pdf]. Drawing on data from an intercept survey of rideshare users as well as several sources documenting taxi use, the authors concluded that ridesharing (or, in the researchers' parlance, ridesourcing), acts as a complement to rather than a substitute for other transportation options, including taxis and public transit. They base their argument in part on evidence that ridesharing customers tend to be younger than taxi users, and use the services differently, making shorter trips with more passengers in ridesharing vehicles versus cabs. 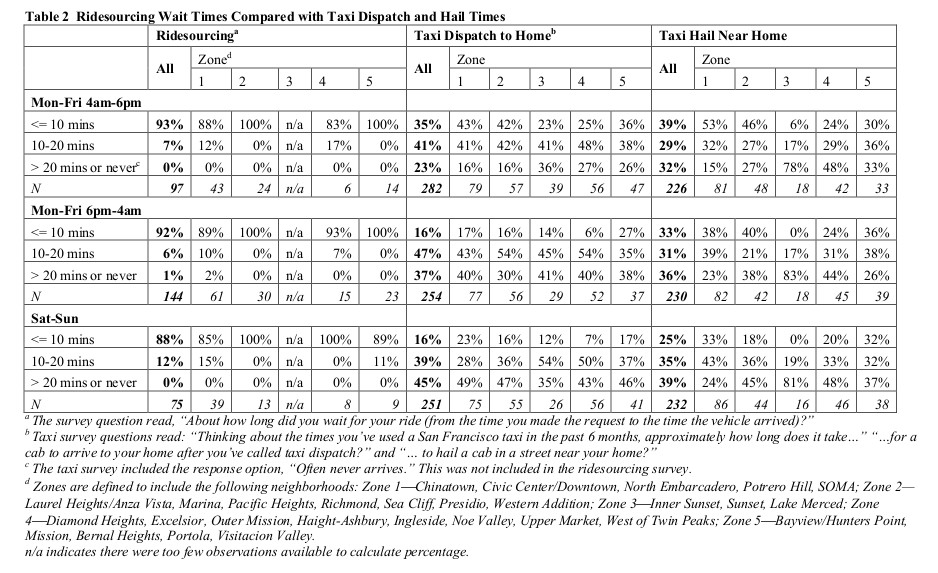 The veracity of its conclusion about competition aside, the UCTC study points to an important distinction between the ridesharing and taxi user experiences, one that may help explain the drop-off in taxi activity since Uber et al. hit the scene. Significantly, the researchers found that ridesourcing users faced markedly shorter and more consistent wait times than taxi users. Nearly nine out of ten survey respondents said that they waited ten minutes or less for their ridesourcing car, no matter the time or day. Taxi users, by contrast, waited ten minutes or less on a cab called to their home only 35% of the time on a weekday, and 16% on a weekend. The pattern held when the report's authors corrected for possible geographical bias, and when they took taxi hail wait times into account.

Why did the two reports come to such different conclusions about ridesharing's impact on the taxi industry? The answer appears to lie with the data itself. SFMTA compared statistics on taxi use longitudinally, while the UCTC team compared ridesharing and taxi user experience on a ride-by-ride basis. Though the UCTC study does suggest that important differences exist between the two modes, including who uses them and how long it takes for a hired car to arrive, it is hard to buy the overarching argument about taxi-rideshare complementarity in the face of SFMTA's findings.

The UCTC researchers and SFMTA's Taxis & Accessible Services Division do agree on one point: the need to review taxi regulations. The UCTC study's authors note that ridesharing's apparent efficiency advantage may be explained by the stringent (and in some cases outdated) requirements faced by the cab industry. SFMTA's approach to reinvigorating the taxi industry, meanwhile, emphasizes increasing driver recruitment and retention through a revamped regulatory framework. The agency has already waived dispatch renewal, color scheme renewal, and driver application fees for fiscal year 2014-15, among other initiatives, and is contemplating other changes, including allowing taxi wrap advertising. "It's time for [the SFMTA] as a regulator to really review the regulations and make sure . . . that they still make sense," Toran told the Examiner. "Our bottom line is public safety, but to the extent that the regulations can be more flexible and more responsive and we have a process to update." 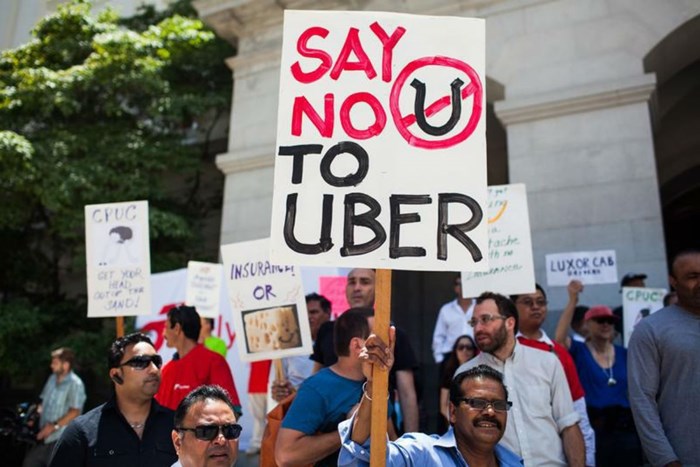