Is a Confusing Pricing Structure Limiting the Growth of Bikesharing? - Shareable
Skip to content

A May 2015 report documents confusion among casual riders about the cost of bikesharing. (SF Bay Area Metropolitan Transportation Commission)

As bikesharing grows, so, too, do the stores of data about its users. Yet most of the studies to date have centered on program members—regular users paying an annual subscription fee—rather than casual customers, who outnumber annual members 20:1 and contribute (per 2012 data) 45-67 percent of a system's total operational revenue. In part, this is because data on annual members is easier to access, thanks to the online registration process. The focus on member-users is nevertheless unfortunate, as it neglects the casual rider's unique perspective. A new report [pdf] from the University of California, Berkeley's Transportation Sustainability Research Center (TSRC) addresses this gap, using the results of an intercept survey to outline the characteristics and needs of Bay Area Bike Share's (BABS) casual user population.

The researchers' primary conclusions have important implications for the future of bikesharing. While most casual users are generally satisfied with the existing system, the team found two areas of weakness through the study. First (and this is consistent with other recent findings) is station location and overall number of stations. Fifty-three percent of casual users surveyed by the team said they were "neutral," "unsatisfied," or "very unsatisfied" with BABS station locations. Nineteen percent of non-users (people who approached a BABS station, but decided against renting a bike), meanwhile, cited "inconvenient location of stations" as the single reason for not using bikeshare. 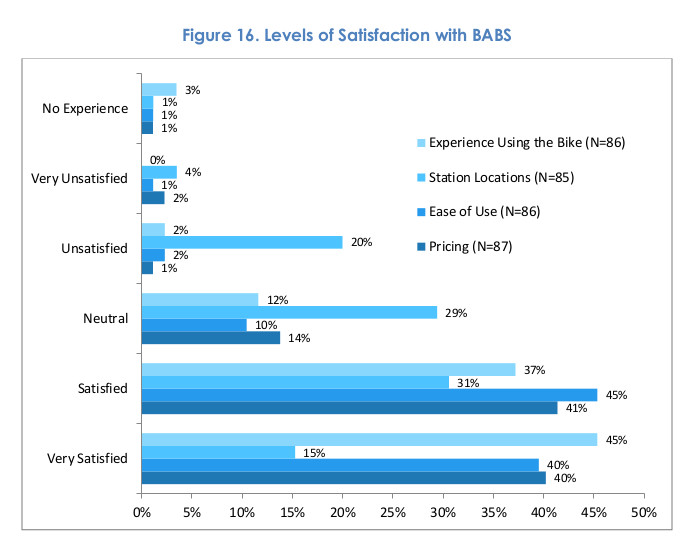 Though satisfied with most other aspects of their experience, station location was a concern for many casual users. (Shaheen, Christensen, and Viegas de Lima, Bay Area Bike Share Casual Users Survey Report)

The second problem area identified in the report is bikesharing pricing. Most North American bikesharing programs follow the "buffet model," introduced in Lyon in 2005. Designed to limit the duration of trips and thus increase turnover at stations, the model involves paying a flat fee to access the system for a given period—for casual users, this may take the form of a 24-hour pass. Users can make as many trips as they like during that period, but the duration of each trip is limited, usually to 30 minutes. After the half-hour mark, the rider accrues overage fees. By comparing the price casual users of BABS expected to pay with the amount they actually owed, the TSRC researchers determined that 53 percent of casual users misunderstood the pricing structure. Of these, the lion's share anticipated a lower bill than they would receive, suggesting that the distinction between access time and ride time remains unclear. 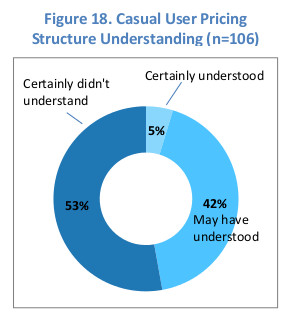 As the study's lead author, Susan Shaheen, pointed out, the solution to the pricing conundrum is not necessarily as simple as switching to another model. A few North American cities have experimented with alternatives. Since 2011, Miami and Miami Beach have offered casual users the ability to purchase riding (as opposed to access) time, which they may distribute however they like. Other systems—including nonprofit networks in Hamilton, Ontario; Phoenix; Tampa; and Orlando—provide both members and casual users with finite pools of daily usage time. "These pricing structures tend to be more intuitive for first-time users, but this could lead to other challenges for operators and cities," wrote Shaheen. "In some cases, they encourage riders to use bikes for longer durations (for instance, one hour or more), decreasing the turnover rate and limiting the total number available at any given moment." Time-pool structures, moreover, blur the line between bikesharing and bike rental.

In the meantime, then, the TSRC researchers have developed a stopgap fix for BABS: a new station decal designed to clarify the system's pricing structure. According to the report, the Bay Area Air Quality Management District is investigating how best to incorporate the concept into their existing decal design. But whether the ultimate solution is improved rider education or a fresh approach to bikesharing pricing, one thing is clear: the way the system is structured matters. To ensure the continued growth of bikesharing, operators, cities, and advocates would do well to consider the experience of a range of user types—not just those riders whose behavior is easiest to track. 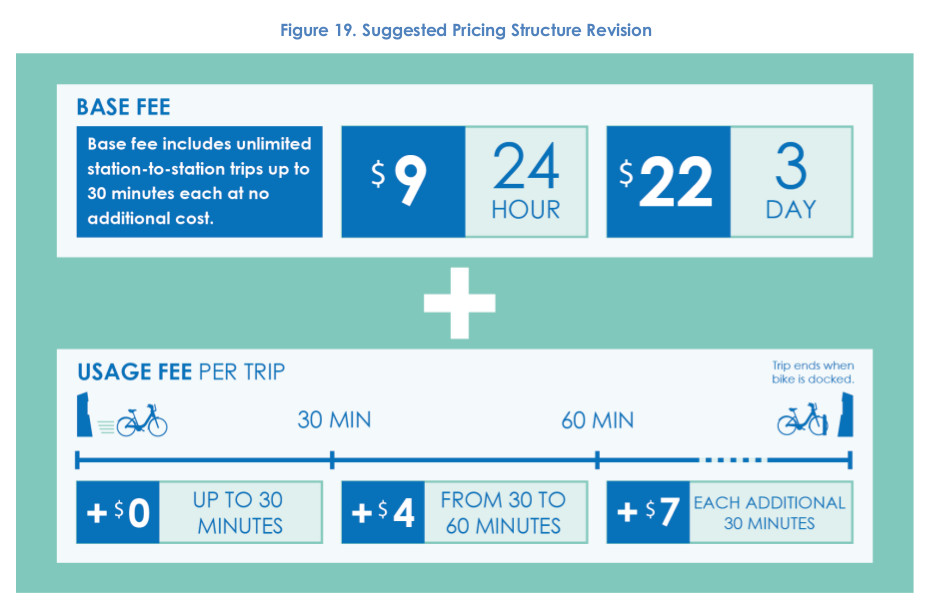