Trends in carsharing suggest the expansion of one-way services like those offered by car2go. (ecomento.com)

Thanks to the aftershocks of the Great Recession, increasing environmental awareness, and other factors, shared-use mobility is booming. Or so it seems, if anecdotal accounts of the popularity of carsharing, bikesharing, transportation network companies (TNCs like Lyft), and other innovations are correct. Hard data is still hard to come by, though less so thanks to the efforts of UC-Berkeley's Transportation Sustainability Research Center (TSRC). A series of recent publications out of TSRC shed light on what is and is not working in the shared-use mobility sector, and on how the sharing economy has impacted traditional modes of transportation.

Recognizing the need for a cross-industry conversation on shared-use mobility, TSRC convened the inaugural Shared Use Mobility Summit in October 2013. Almost 300 participants including policymakers, stakeholders, academics, and industry representatives met in San Francisco to discuss the present and future of shared-use mobility services. According to TSRC's retrospective on the summit, many attendees articulated a concern with multi-modal integration—the need to provide hassle-free transitions among various transportation options, including existing public transit networks. Other challenges include addressing the equity question and balancing open data with respect for users' privacy.

More recently, TSRC released its semi-annual carsharing outlook, a brief rundown on trends in carsharing. The publication documents substantial growth in both members and vehicles across the Americas. In the United States, membership numbers increased from 995,926 in 2013 to 1,337,807 this year (a 34% rise), while the number of vehicles increased from 16,811 to 19,115. Those figures are even more impressive when compared to the 2003 baseline: 25,640 and 696, respectively. 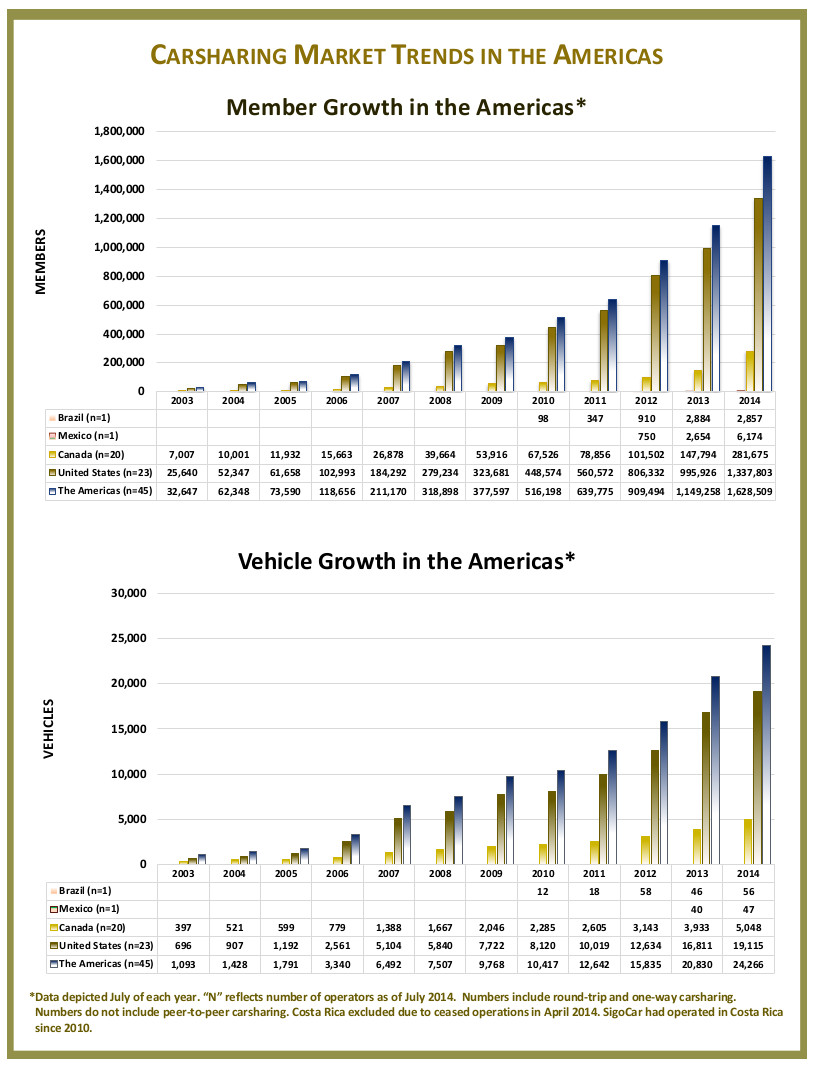 Carsharing in the Americas grew significantly between 2013 and 2014. (Shaheen and Cohen/TSRC, "Innovative Mobility Carsharing Outlook")

As for trends, TSRC's 2014 outlook points to one-way service as the next frontier in carsharing. Both large carsharing programs set to launch in the coming months—Las Vegas' electric-vehicle-based SHIFT and Indianapolis' BlueIndy—will allow one-way as well as round-trip use. Zipcar, meanwhile, announced in May 2014 that it would test a one-way service later this year.

TSRC also tackled peer-to-peer (P2P) carsharing in an October 2014 article [pdf] in Transportation Research Record. Study authors Ingrid Ballus-Armet, Susan Shaheen, Kelly Clonts, and David Weinzimmer performed an intercept survey in San Francisco and Oakland, California in order to assess public perception of P2P carsharing. The results contain both bad and good news for the mode. On the negative side, the survey revealed a low awareness of P2P carsharing, particularly among individuals without access to a private vehicle. Less than 50% of San Francisco respondents and 25% of Oakland residents had heard of the service (versus 84% and 62%, respectively, familiar with "traditional" carsharing). On the other hand, the researchers documented considerable interest in the service: 60% of the San Francisco residents and 75% of Oakland respondents without vehicle access said that they would consider renting a P2P vehicle. 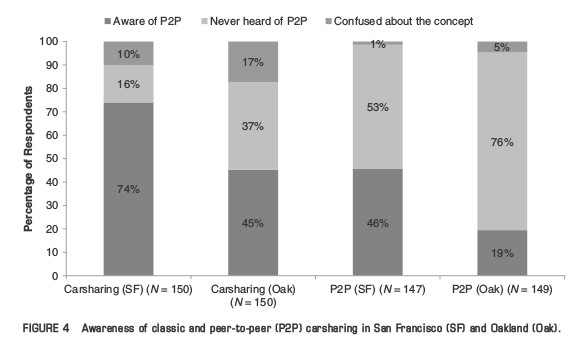 On the bikesharing front, two TSRC publications address the questions of bikesharing user demographics and the relationship between bikesharing and other transportation modes. For an October 2014 report on public bikesharing in North America, Susan Shaheen and her research team interviewed representatives of bikesharing companies and surveyed members and non-members in several North American cities. The survey results confirmed what previous studies have shown: that bikesharing members are more likely to be younger, white, and male, with higher levels of education and income than the general population. This suggests that reaching out to underrepresented groups is an important next step for the industry, both in terms of market expansion and from a social-equity perspective.

This report and another fall 2014 article also offer some insight into the potential of bikesharing to induce changes in driving, bus, and rail use. The answer seems to be dependent in part on the local context; thus, it is difficult to draw definite conclusions except with respect to driving, which appears to decrease substantially with bikesharing membership. As for public transit, bikesharing appears to be somewhat more likely to increase rail use, but the effect may depend on the member's location with respect to the urban core. 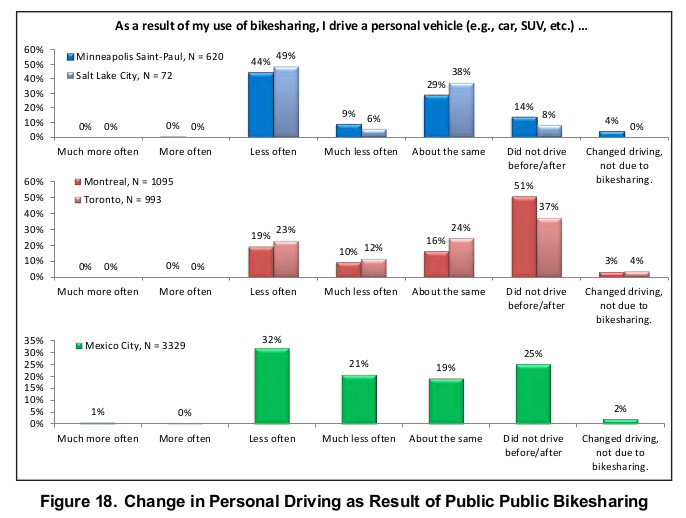 A 2014 report documented a decrease in driving among bikesharing members. (Shaheen, et al./MTI, "Public Bikesharing in North America During a Period of Rapid Expansion")

A final study from TSRC, an August 2014 working paper on TNC use and the taxi industry, also points to the difficulty (at present) of pinning down the role shared-use mobility innovations play in making or breaking traditional modes of transportation. The paper, based on an intercept survey in San Francisco, found that TNC rides served as a substitute for longer, multi-part trips on public transit, but otherwise appeared to complement transit use. It also suggested that TNCs complement rather than compete with taxi services. Though this conclusion appears to fly in the face of recent statistics from SFMTA, it may be explained by the paper's methodology—a ride-by-ride rather than longitudinal comparison of TNC and taxi trips.

TSRC's work in the field of shared-use mobility suggests that, yes, these services (or at least some of them, like carsharing) are here to stay. It also proves that the data is there, be it in the form of member surveys or trip logs, and ripe for further investigation. In the coming months and years, both shared-use mobility advocates and skeptics can expect to see growth on two fronts: within the carsharing, bikesharing, and associated industries themselves; and with respect to our broader understanding of their social, economic, and environmental impacts. 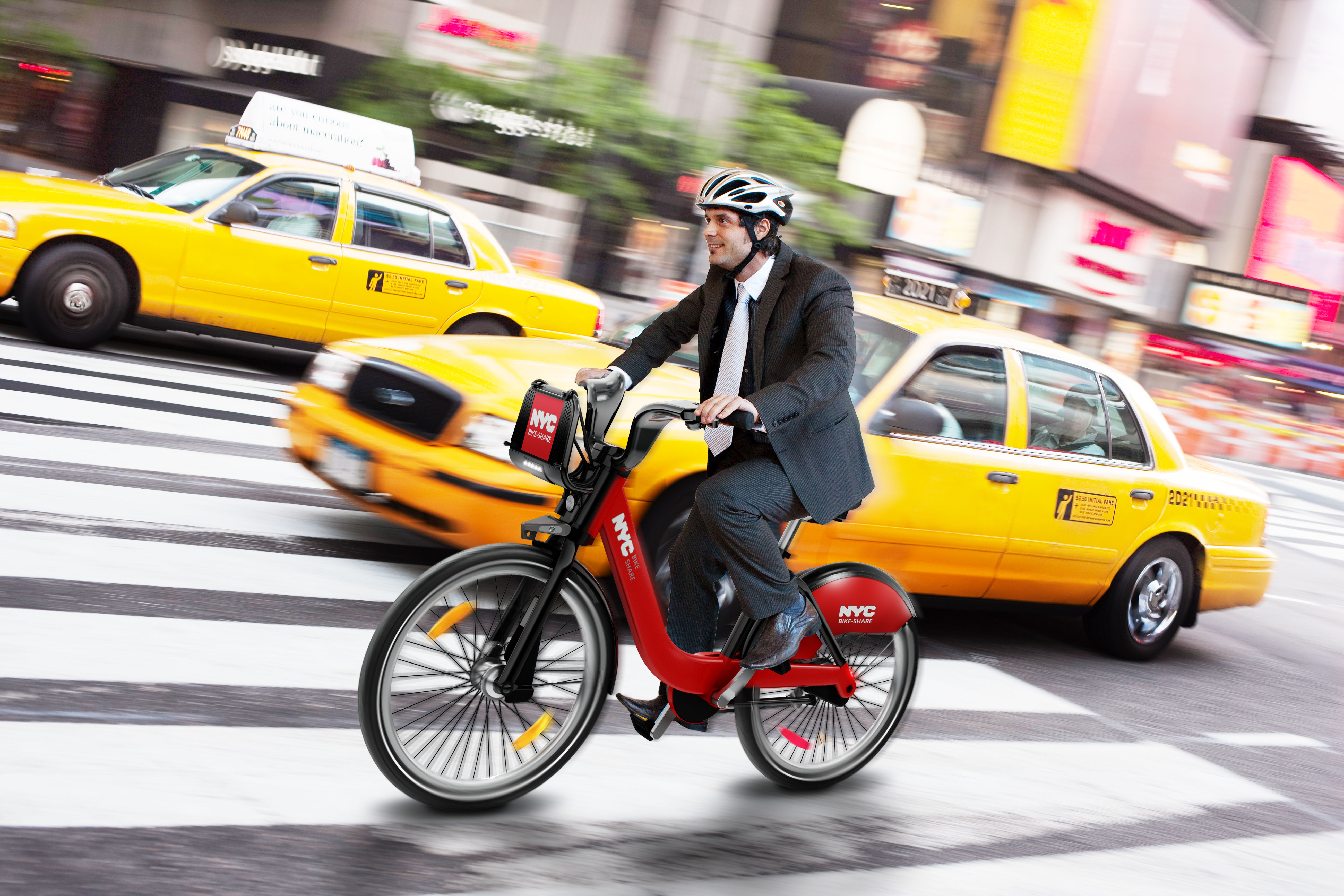