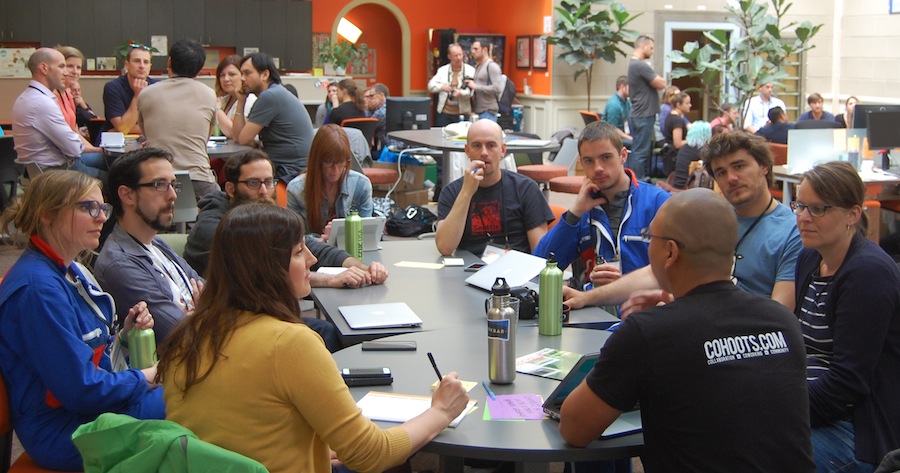 To kick off last week’s Global Coworking Unconference Conference in Berkeley, Ca., Tony Bacigalupo, co-founder of New Work City, posed a question: Who thinks coworking means dividing up office space to sell at a profit? Not a hand went up. He then asked those who think coworking is something more than that to raise their hand. Nearly every hand in the room shot up, accompanied by cheers, shouts, and hollers of approval. And with that, we launched into three days of community building, information sharing, and planning around coworking.

The recurring themes of this year’s GCUC (pronounced “juicy”), hosted by NextSpace Berkeley, were community, colearning, creating alliances, and a notion that is at the heart of GCUC: that those within the coworking community are collaborators, not competitors.

In just 10 years, coworking has grown from a temporary space in San Francisco, complete with card tables and a few chairs, to over 3,000 spaces around the world. A GCUC participant from Japan told an unconference session that there are now over 300 coworking spaces in Tokyo alone.

Brad Neuberg, who opened that first coworking space in San Francisco in 2005, and coined the word coworking, told the GCUC audience that when he told people about coworking originally, he had people laugh at him.

“Go ahead, be weird,” he advised. “Sometimes what's weird goes mainstream and becomes the new normal.” 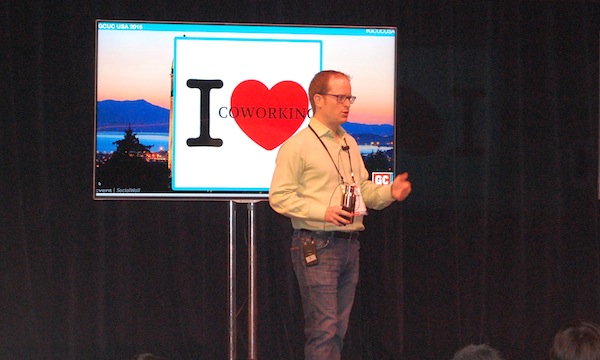 Brad Neuberg, who created the first coworking space, encouraged the GCUC audience to steal his idea and build on it. Photo: Cat Johnson

As coworking booms worldwide, coworking space operators build on the concept and create spaces to suit their community. Neuberg encourages this evolution. Throughout his presentation he returned to a mantra that drives open culture, including coworking: Steal this idea, remix it, make it your own.

Liz Elam, executive producer of GCUC, explains that the growth of coworking means there’s more opportunity for everyone. When asked what she would like to see from the coworking movement, she says she’d like to see more people “jump in the pool and do it” because there's so much room for growth. Her goal for GCUC is to inspire people.

A hot topic at GCUC was the rise of corporate “coworking.” In 2011, much to the laughter and dismay of those in the coworking movement, office rental giant Regus announced that it “pioneered the concept of coworking two decades ago.” Business complexes that have been divided into cubicles or offices are also jumping on the “coworking” bandwagon. Those gathered at GCUC questioned whether WeWork, which The Atlantic recently described as “the biggest player in the coworking universe,” can really be considered coworking. Regardless of whether you consider a company valued at $5 billion to be aligned with the collaborative ethos at the heart of coworking, the fact is, these corporate spaces are here.

Bacigalupo sees the rise of corporate “coworking” as a sign of coworking’s arrival.

“It's part of the natural evolution of things,” he told me. “One thing starts out punk rock and eventually gets corporate. I think that what we do with that is up to us. If there are enough people that believe in rock and roll, then rock and roll will live.” 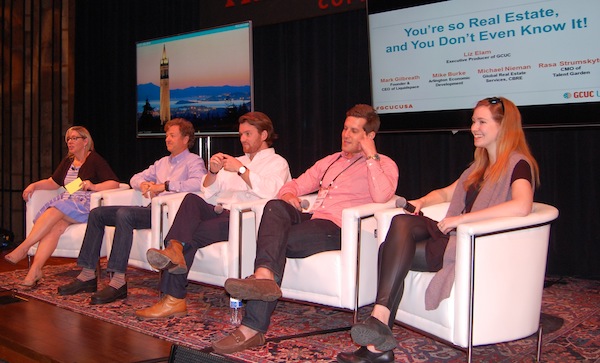 The driving spirit of GCUC leans heavily toward community, but that’s not to say that business is left by the wayside. There were sessions on real estate best practices (get a broker and negotiate with landlords), tech tools (people are hacking together apps, spreadsheets, and platforms seeking integrated solutions), and how to design a space to attract members and get the highest return on investment (“Simplify what you have, and prioritize what you need,” advised Jerome Chang, of Blankspaces).

Now in its fourth year, GCUC has grown into an international event to empower coworking professionals. The unconference sessions, where participants choose the topics, included discussions about event marketing, the operating costs of opening a space, what to do before you sign a lease on a space, how to stay productive in your space, tech dos and don’ts, tips for community managers, funding a coworking startup, securing sponsorships, what amenities to offer, the best customer relationship management (CRM) software to use, how to cultivate diversity in your space, and more. There was also talk about coworking spaces partnering with municipalities, small business organizations, and economic development departments. 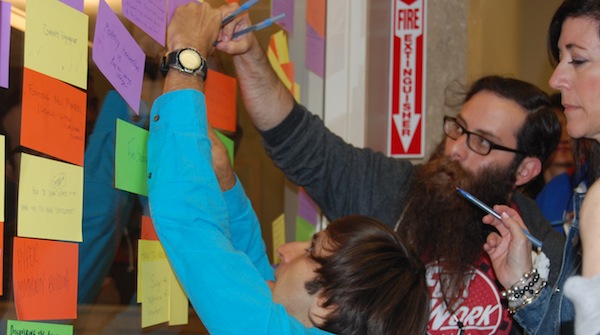 Now somewhere between its infancy and global ubiquitousness, coworking is being shaped by coworking space owners and members from around the world, many of them in attendance at GCUC. There were dozens of countries represented at the conference, and there are several international GCUCs, including GCUC Australia next month in Sydney, GCUC Canada in Toronto in September, and the just-announced GCUC South America in Brazil this fall.

“This is a movement that we're building to change the way people work forever,” Bacigalupo told the audience. “One hundred years from now, when they talk about the history of coworking, they'll be talking about what we in this room are doing. If you're here, you're a part of it.”