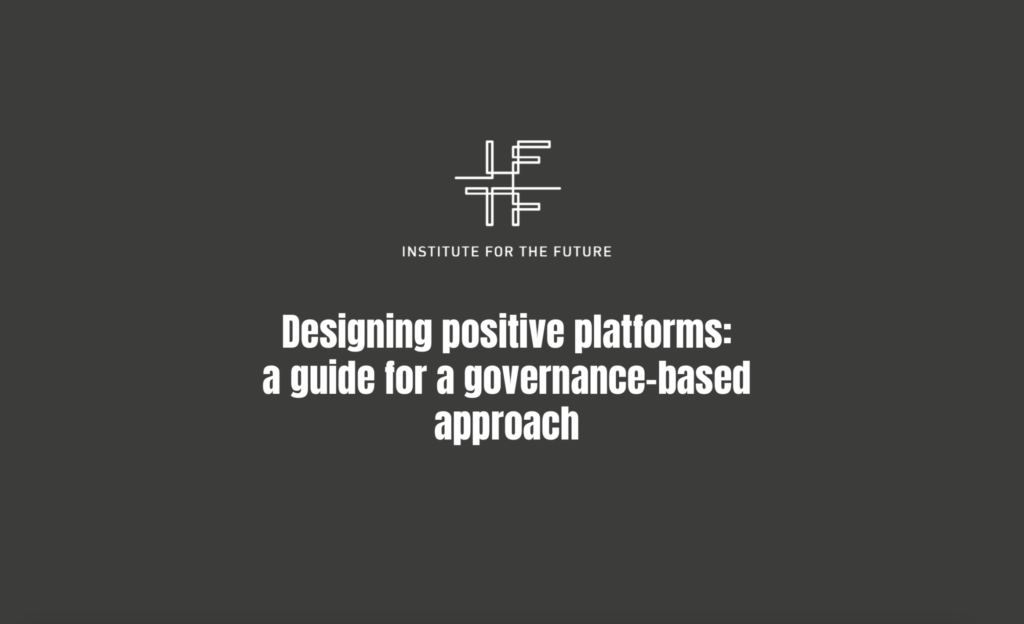 It seems like every day there's a new gig economy platform. As this new form of temporary work grows, so do the voices expressing criticism over how these platforms operate and who they prioritize. Over the past few years, we've seen ride-hailing companies like Uber face lawsuit after lawsuit for the mistreatment of its workers and Juno encounter backlash for backtracking from offering 50 percent equity to its drivers as it had initially promised. There's increasing evidence between the rise of gig work and stagnant wages.

How can companies design platforms that actually take workers' rights into consideration? Two researchers at the Institute for the Future, a nonprofit think tank based in Palo Alto, California, have come up with a guidebook of sorts.

"We wanted to make sure our research would be practical — something that a start-up, for example could read, and implement," says Ana Manzanedo, one of the authors of "Designing Positive Platforms: A guide for a Governance-based Approach."

The report, released last year, provides case studies from 15 global enterprises, cooperatives, nonprofits, and networks and identifies several principles that can make a "positive platform." Manzanedo and her co-author Alícia Trepat defined a "positive platform" as an organization that "should offer its contributors the authority to make decisions about their working conditions and the right to organize themselves collectively."

The researchers said their goal was to create a framework that would allow organizations of all kinds to quickly implement their findings. They wanted to use real world examples to illuminate actionable solutions, rather than theories or untested models of which there are many. Thus, Manzanedo and Trepat set guidelines for what kinds of organizations they would assess to ensure they would have real world applicability.

"We set some strict criteria," says Trepat. "We wanted to have organizations that have been around for more than three years, that we could see had scale, or had a minimum amount of turnover."

Whether a platform is positive or not depends mainly on how it is governed. In their report, Manzanedo and Trepat analyzed three formal aspects of governance: ownership, power, and value. These are presented in the report around five "Positive Principles," with examples of one or more organizations that are practicing each principle in an effective way in its governance. The principles include inclusion, participation, autonomy, recognition of the generated value, and welfare.

These principles are not meant to be all encompassing — in fact, they are just a starting point. Manzanedo and Trepat have identified two other crucial components to governance — culture and information — that they plan to finish later this year. They are also working on developing a practical tool that any organization can use.

"An open, self-assess tool where you can measure the level of collaboration within your organization — it will be linked to different tool boxes with literature, framework, practical answers on how you can improve," says Manzanedo.

By breaking down the designing of positive platform into concrete steps and actions, Manzanedo and Trepat hope to persuade more start-ups, cooperatives, nonprofits, and even corporations to integrate positive principles in their governance — and potentially transform the gig economy for the better.