In June of 1999, Napster revolutionized and galvanized the music industry in one fell swoop. While turning the business on its ear, Napster turned everyone else's focus toward the digital future where songs were deemed information and, therefore, free for the giving and taking. At its peak, the company's innovative peer-to-peer file-sharing technology allowed some 25 million global users to swap 80 million songs, and it never once crashed. Soon enough, copycats such as Gnutella, Freenet, Limewire, Grokster, and others joined the fray. They, however, operated with slightly different models and were, therefore, smaller influencers than was Napster.

Though the model boosted music consumption in a massive way, missing in the Napster equation was the monetization of the music: how would artists – and record companies, for that matter – profit from their work? The creators of the distributed product were effectively cut out of the deal. Independent musicians, especially, pour everything they have into the production of a record, financially and otherwise; how could they allow their creations to be given away and still make a living? Within months of Napster's launch, the Recording Industry Association of America (RIAA), rather than utilizing the p2p application, filed a copyright infringement lawsuit. Thanks in part to the publicity generated by the legal shenanigans, Napster thrived until it was eventually shut down in July of 2001. 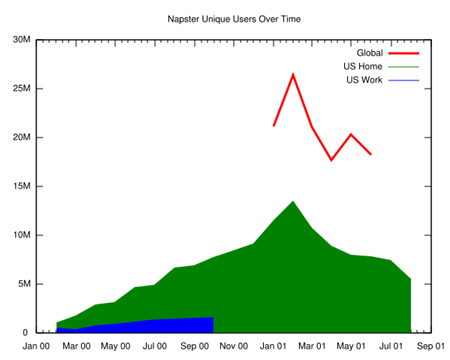 Sure, copyrights were infringed upon, but at least one major study concluded in 2004 that Napster did not have an adverse effect on the industry's revenues. To the contrary, “Songs that were heavily downloaded showed no measurable drop in sales, the researchers found after tracking sales of 680 albums over the course of 17 weeks in the second half of 2002. Matching that data with activity on the OpenNap file-sharing network, they concluded that file sharing actually increases CD sales for hot albums that sell more than 600,000 copies. For every 150 downloads of a song from those albums, sales increase by a copy, the researchers found.”

Shortly following the demise of Napster's free-for-all, Apple emerged with its iTunes store in 2003 and digital downloads had found their worth – $.99 each. To ensure that the files stayed with their purchaser, a digital rights management (DRM) system was put into play wherein a digital watermark was embedded within the music files to essentially bond the song to the device onto which it was downloaded. This, too, caused an uproar, though this time it was from the consumers' side rather than the industry's. From the moment it was born, iTunes has reigned supreme in the digital download domain. That domination has been, at times, as high as 90% of the paid music download market with its share of overall U.S. music sales reaching nearly 27% last year.

But, still, something was missing in the grander scheme of music. Rock icon Jon Bon Jovi, for one, thinks he knows what it is. And it's all Apple's fault. He said recently that iTunes is to blame for ruining the fans' “experience of putting the headphones on, turning it up to 10, holding the jacket, closing their eyes and getting lost in an album, and the beauty of taking your allowance money and making a decision based on the jacket, not knowing what the record sounded like, and looking at a couple of still pictures and imagining it.”

However, other artists believe what has been displaced in all of the hullabaloo is the connection between music makers and music lovers. One of those believers, singer/songwriter Derek Webb, decided to remedy that problem with a sharing-based solution. Webb figured, “If you give [your music] to them for free, you've just taken away their last reason not to give you a shot and not to listen to your music.” And so he did just that. To promote his 2005 Mockingbird album, Webb offered free downloads of it in exchange for the downloader telling five friends about his work. He reckoned that new music is most often discovered on the recommendation of a friend or other trusted source. The result was that more than 80,000 people downloaded an album which had previously sold fewer than 20,000 units. Another positive by-product was that all of Webb's records enjoyed sales spikes, as did his concert attendance.

The experiment led to the founding of NoiseTrade alongside music business veterans Mark Nicholas, David McCollum, and Brannon McAllister. Like iTunes before them, NoiseTrade had to calculate a fair market price for the music, but they opted for one that weighed the value of information and promotion against that of cash. Their model of monetization is summed up in the company's tag line: Fair Trade Music. In a nutshell, artists trade their songs for e-mail addresses of fans and potential fans.

Webb explained the original vision this way: “Ultimately, we can't be in the business of selling round pieces of plastic… compact discs. We have to be not in the record business, but in the music business. We have to be in the business of connecting people to music. And if we can do that efficiently, and we can make it easy for them to do what they want to do anyway which is tell all their friends about it if they like it – and even reward them for doing that by giving them the records for free – then everybody wins.”

When NoiseTrade first launched in 2007, they did so with fewer than 500 artists on the bandwagon. The formula stuck closely to Webb's, offering free music to people who would cough up the e-mail addresses of five friends. Alternately, the fans could pay for the download, and name their own price. According to McAllister, only about 4 to 5 percent of the site's visitors choose the pay route, with average tips in the $4-5 range. A few artists, though, have raked in close to $5,000 net – not too shabby for a site rooted in free music.

Laying down the statistics, McAllister said, “We've had six artists go over 25,000 downloads, with the highest number of downloads around 50,000. Over 100 artists have had more than 2,500 downloads. The artists who have the most downloads are those who distribute exclusive or brand new content. One artist gave away an exclusive recording of a special live show and had a massive number of downloads in a very short period of time. Keep in mind that these aren't just torrent or Napster-type downloads –they all include the exchange of real e-mail addresses and zip codes for these artists to reach the fans later. That's where the real value comes in.”

NoiseTrade isn't alone in the realm of empowering artists and connecting fans, either. Operating under Creative Commons licenses, Jamendo claims to be “the world's #1 platform for free and legal music downloads.” The bulk of the value for artists here comes through exposure, though they can accept donations and do get 50% of generated ad revenues. Meanwhile, Daytrotter's offerings are limited to special sessions recorded in their Rockville, Ill. studio and RCRD LBL posts only a few hand-picked selections a day with a catalog of over 25,000 songs.

Topspin is perhaps the most similar to NoiseTrade in utlizing a “direct-to-fan marketing” model replete with embeddable widgets and other premium services. Artists pay a monthly fee to set up their Topspin store with additional percentages taken out of sales revenues. It's obviously a solid, successful option, as Linkin Park, Arcade Fire, Gregg Allman, Kid Rock, and Sigur Rós can all be found there. Heck, even Derek Webb is on Topspin. As of last June, their roster consisted of about 600 artists up from the 10 or so they started with initially.

The embeddable NoiseTrade widget that artists use to promote their music on other sites.

These days, the number of folks peddling their wares on NoiseTrade has blossomed to more than 4,500 with The Civil Wars, Lori McKenna, Peter Bradley Adams, Trent Dabbs, and Butterfly Boucher among them. Up-and-coming singer/songwriter Katie Herzig has been along for the ride since the early days. She understands the “real value” of which McAllister speaks and, even though NoiseTrade has lowered the e-mail exchange requirement from five addresses to only one, Herzig still thinks it's a fair trade. “Since I'm trying to still introduce a lot of people to my music, I think it is [fair]. I'm not looking for a one-time sell; I'm looking for a lifetime fan and I think having a way to directly let them know about tours and new music is really valuable. An e-mail list is extremely valuable to indie artists.”

Like Webb, Herzig has seen the evidence firsthand, with new fans coming up to her at shows explaining that they discovered her on NoiseTrade. Apparently, the site does exactly what it is meant to do. McAllister credits the free-range nature of the beast: “I think the first thing to remember is that anything that's digital wants to be free. Whether it's music, a book, a movie, or a piece of software, people will find a way to get what they want with the least friction possible. It's impossible to know what would have happened if a legal Napster had offered music in exchange for e-mail addresses, but that's kind of what we're figuring out right now with NoiseTrade, isn't it? And if the artist and fan response is any indication, it's making a ton of sense for everyone involved, even for the independent and major labels that are beginning to get involved with NoiseTrade.”

As with any technology, NoiseTrade is a work in progress. An upcoming upgrade of the site will include faster load times and some much-needed search features as well as more social media tie-ins. It's not at all surprising that more than half of the traffic on NoiseTrade – some 5,000 new users each week – comes from Facebook. All of the coming changes are geared toward creating, as McAllister put it, “the least friction possible” for fans and artists alike.

While old-school, major label musicians like Bon Jovi and Prince (who refuses to sell his music via iTunes) direct their ire at Apple and its ilk, emerging artists such as Webb and Herzig have chosen to fully embrace and harness this new Internet-based frontier. Herzig observed, “I think it's an exciting landscape for independent artists who own their own music. Much of that takes flexibility and creativity, adjusting to the inevitable changes that come with time and technology shifts. It's been fun lately to watch some of my friends fund entire record budgets with online donations from their fans through Kickstarter and such. While the Internet can be blamed for fewer sales, it can also be praised for allowing independent music to thrive and be accessible to the world.”