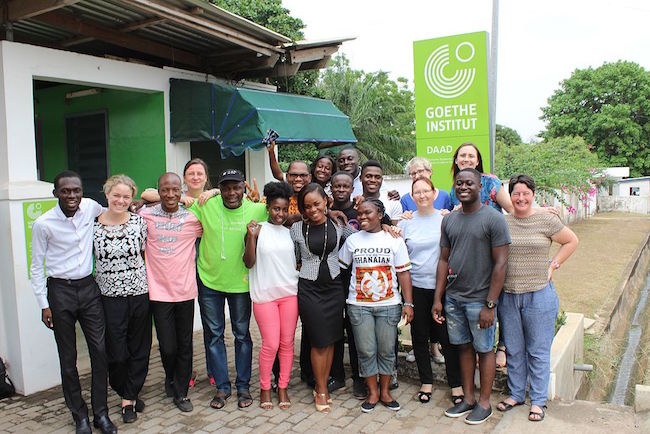 Almost everyone who searches for information has used Wikipedia, the online encyclopedia with over 40 million articles (in roughly 300 languages) written and edited by volunteers around the globe. Yet despite the whopping amount of information Wikipedia contains, less than 20 percent of all Wikipedia contributors in 2015 were women, according to the Wikimedia Foundation.

But according to Isla Haddow-Flood and Florence Devouard, the gap is even greater when it comes to both contributors from Africa and Wikipedia articles about the people, history, culture, and ideas from the continent. "I was bothered that just a few years ago, there were no African contributors for Wikipedia," said Devouard, who served on the board of the Wikimedia Foundation. And information about African women (who are living in Africa) was especially lacking. "The content available on Africa was a gap, but the lack of it on women was an abyss," said Haddow-Flood — chair and advancement lead of the nonprofit Wiki in Africa — who lives in Cape Town, South Africa.

So in 2016, the two launched Wiki Loves Women, a pilot project that worked in Cote d'Ivoire, Cameroon, Ghana, and Nigeria to organize efforts among community members to contribute Wikipedia entries about African women. The Goethe Institut donated $120,000 euros to fund the pilot for 15 months (until March 2017), and donated meeting space and support in the four countries. We spoke to Haddow-Flood and Devouard to learn more about the project.

Kristine Wong: Tell me more about what motivated you to start Wiki Loves Women.

Haddow-Flood: The point was to celebrate women in Africa that people don't know — and also to reflect the daily issues that women encounter. Something that is cultural, something that is political, or something that affects women around the world, for example.

How did the project work on the ground?

Haddow-Flood: In the applications, we asked them to tell us how they wanted to work and motivate community members. In Cameroon, we have a single person who works on the project and in Cote d'Ivoire and Nigeria it was Wikimedia chapter that worked on it as a group. In Ghana, a Wikimedia group was set up.

Once the team was sorted out in each country, we worked with them to isolate where they wanted to focus their time and energy. They thought about subjects and topics they wanted to cover and they approached various organizations. There were groups that had content — mainly civil society organizations — for example, someone who works with women in shantytowns. Cote d'Ivoire wanted to work with women in parliament. We also worked with partners such as a tech lab or a writers group or people who were interested in learning how to write on Wikipedia. There was a monthly stipend given to each of the groups. In some cases, it was a salary. In other cases, it was a way to support the group.

Devouard: We left them a lot of freedom. We are in touch with them by Skype and email, and we met a few times through the different Wikimedia events. The results of their efforts reflected their own personal interests. In Nigeria, we had a person with a lot of personality and someone who was focused on women's rights, for example related to forced marriage or breast cancer. In Ghana, they had a small group that was very tech-aware and tech-oriented. So quite naturally they were focused more on tech training and on women leaders in technology. In Cameroon, there was a focus on sports and professional occupations. We wanted them to go in the direction where there was the least resistance. 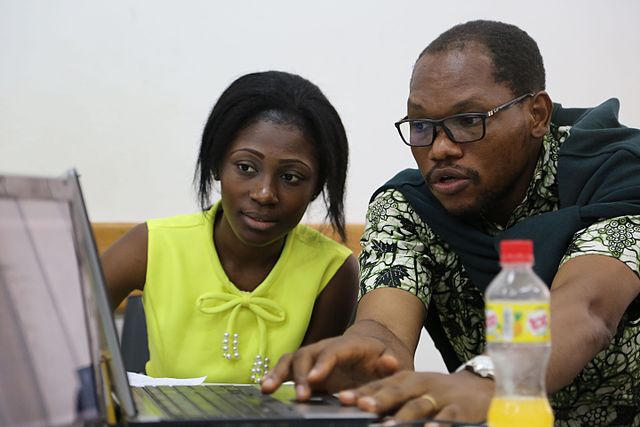 Wikithon at the Goethe Insitute on June 26, 2016. Photo by Uwe Jung via Wikimedia Commons

What are some of the outcomes and results of the project?

Haddow-Flood: There's been empowerment and confidence in the women who had already been part of the Wikimedia group. This project allowed them to have more of a standing in it. For example, in Cote d'Ivoire, one woman felt quite intimidated in the beginning and now she's one of the leaders in the group. The same thing happened in Ghana as well, in that people who had come into the group as part of the project started to take on leadership.

And we were able to count that we started or expanded 1,510 articles on Wikipedia. This is not all just concentrated in those four countries. There was also an online contest we had. We started with a writing project and halfway through we were part of expanding stub articles and female articles all relating to women subjects. We also had a "translata-thon" as well where we chose the 16 important women from Africa and the ideal was to translate [the article] into 16 different languages. People from Texas and London and Helsinki and Armenia — they were with us in our mission and wanted to contribute to Wikipedia.

Devouard: It's incredibly hard to totally measure the amount of content that was added to Wikipedia, because we can count photos but we can't measure articles where content was added. It's one of our challenges. Now they are tracking when content is added, but they didn't before. And in our case the duration of time [the project was funded for 15 months] is not long enough.

What are the challenges that the project faced?

Haddow-Flood: The ongoing challenge we have is to make sure it continues – that's a massive challenge. We need much more funding to carry on and expand it to other countries.

What lessons learned would you pass on to others who are interested in starting similar efforts?

Devouard: The important thing is to try not to reinvent the wheel and try to work with people who already have the information. What's very important is to be respectful of the group and communities you're working with, and trying not to impose your preconceived model on them. Provide as much support as they need. Be mindful of cultural dynamics and where they are at that time.

What do you consider to be success in this project?

Haddow-Flood: For us, it's if in five years, 16 countries are self-sustained and continuing for the project for themselves. We needed the kind of interventions in the last 15 months to make that happen and to set people on the right track to make it happen and working towards that goal. The four countries that were funded for the pilot project are continuing on, but not with the same energy since the funding has ceased. But in no way do they want to stop doing this.

This Q&A has been edited for length.

Header photo of the Wiki Loves Women meeting at the Goethe-Institut Accra in Jan. 2017, courtesy of Islahaddow (photo by Gereon K.) via Wikimedia Commons