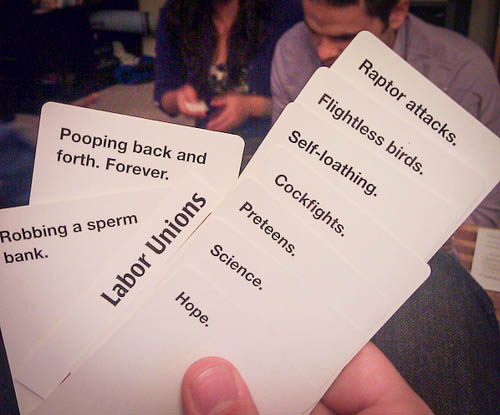 Cards Against Humanity has been pushing the boundaries since the beginning. A slightly demented party game that forces you to free-associate, Mad Libs style, things like “Virginia Tech” and “boogers,” the game has been widely celebrated by self-proclaimed “horrible people” everywhere.

As of this writing, it’s entirely sold out — possibly a surprising development, since Cards Against Humanity is Creative Commons licensed, and the creators will help you download and print your own cards for free.

How profitable has this model been? Evidently, profitable enough that the game’s creators could afford to run a little holiday experiment. CAH released a limited edition of pay-what-you-want holiday expansion packs. With most people shelling out $5, CAH turned a profit of over $70,000. Then they donated the entire amount to the Wikimedia Foundation.

As this infographic explains, $70,000 could buy a small island — or 341 partridges in pear trees, or 1,000 liters of fresh boar sperm. “Wikipedia is very important to us because without it we would not have known the exact volume of a dose of boar sperm or graduated college,” the infographic says.

With a new generation of graduates supplanting its education with resources like Wikipedia, can we expect increased financial support for free and collaborative resources? If Cards Against Humanity is any indication, the millennial generation is about to pay in to the sharing economy, big time.

So how much did everybody pay for those expansion packs? Not so surprisingly, almost 20% paid $0. 75% paid $3 or more. The most generous state — Wyoming — shelled out $4.79 on average. The thriftiest — Alabama — paid $3.31. With a production cost of about $3 per pack, CAH was bound to turn a profit no matter what. Read the infographic for more fun stats.

Here’s a video of Cards Against Humanity co-creator Eli Halpern dropping a $70,066.27 check in the mailbox. His final word on the subject: “We’ve made a huge mistake.”

A donation to Wikimedia from Max Temkin on Vimeo.

CORRECTION: The original article mistakenly identified Eli Halpern as Max Temkin! So uncool, sorry Eli. We also said you can’t buy the game through Amazon. You can purchase the game through the site, but the order is filled by CAH.