How to "Hoffice" with Other Freelancers for More Health, Happiness and Productivity - Shareable
Skip to content 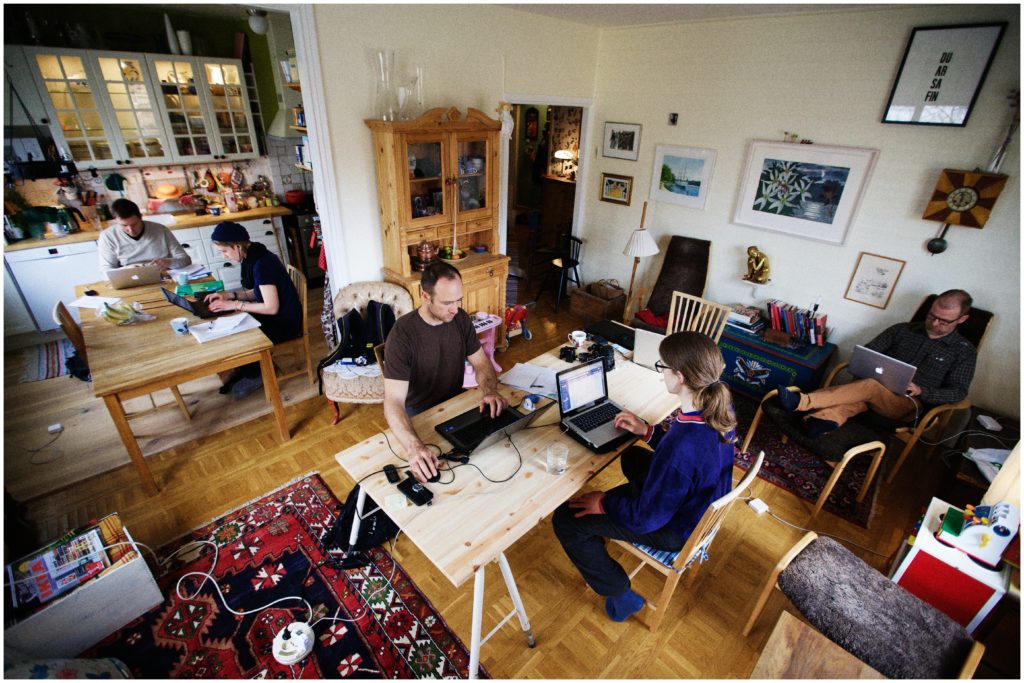 One of the very early Hoffice events in Sweden. Credit: Amrit Daniel Forss

One of the biggest disruptions of the information age is a rise of freelancers, self-employed workers, and other indie workers. As futurist Jeremy Rifkin has said, "we’re moving from big, vertically integrated companies towards diverse horizontal value chains and a self-organized ecosphere of makers."

While this transformation may improve the overall sustainability of our society, there are also big drawbacks. One is isolation. Many workers have lost the belonging, community, and face-to-face team work that big companies offer. At the same time, more people are workplace-less and are forced to work from home, cafés, libraries or co-working spaces.

Suffering from those drawbacks himself, the Swedish psychologist Christofer Gradin Franzén became pro-active and invited his friend Johline Lindholm to start working at home together. Now their question was: “How do we create good working structures and at the same time give ourselves and each other what we need to benefit our well-being?”

They came up with a concept and called it Hoffice, a merger of the words home + office. As the name indicates, the core idea of Hoffice is that someone invites you into their home, which is thereby transformed into a temporary co-working space.

For the co-working day, Christofer and Johline proposed a structure: 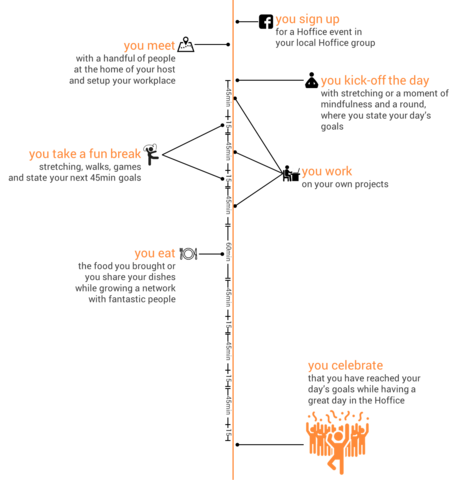 You meet: Around half an hour before the work day starts, you can drop in at your host’s place, set your workplace up and meet your co-workers.

You kick-off the day: At an agreed point of time you gather with all the other attendees in a circle to kick-off the day. Some co-created stretching or a mindfulness practise creates calm in you. Then everyone shares their day’s working goals. You say something like: “Today I will celebrate, if I get X & Y done”. This speaking of intentions creates a feeling of social accountability in you: “the others know what I’m working on and want me to succeed!”

You work: Next follows a 45 minute work block, where you focus on your own tasks. In the same manner as for the whole day, every work block starts with setting a tangible goal: “In the next 45 min I will get X done,” and ends with a brief reporting back to the group: “I’m happy! I reached my goal!” / “I’m struggling with X. Maybe I should do something else…”). The idea is that you are nudged to split your work up in smaller portions and learn to be realistic on time consumption of the tasks.

You take a fun break: Based on the insight that humans don’t concentrate longer than 45 minutes, in the Hoffice you deserve to take a good break: 15 minutes of stretching, dancing, playing, meditating… whatever you and your host can come up with! It might feel at the start a bit awkward to go wild with people you hardly know, but it will do you so good! Your awareness will stretch from your head, back to your whole body. Stress gets relieved, before it gets stuck in your muscles. 15 minutes every hour might sound like taking a lot of breaks, but you will see how they help you to regain willpower and focus for the next 45 minute work block. 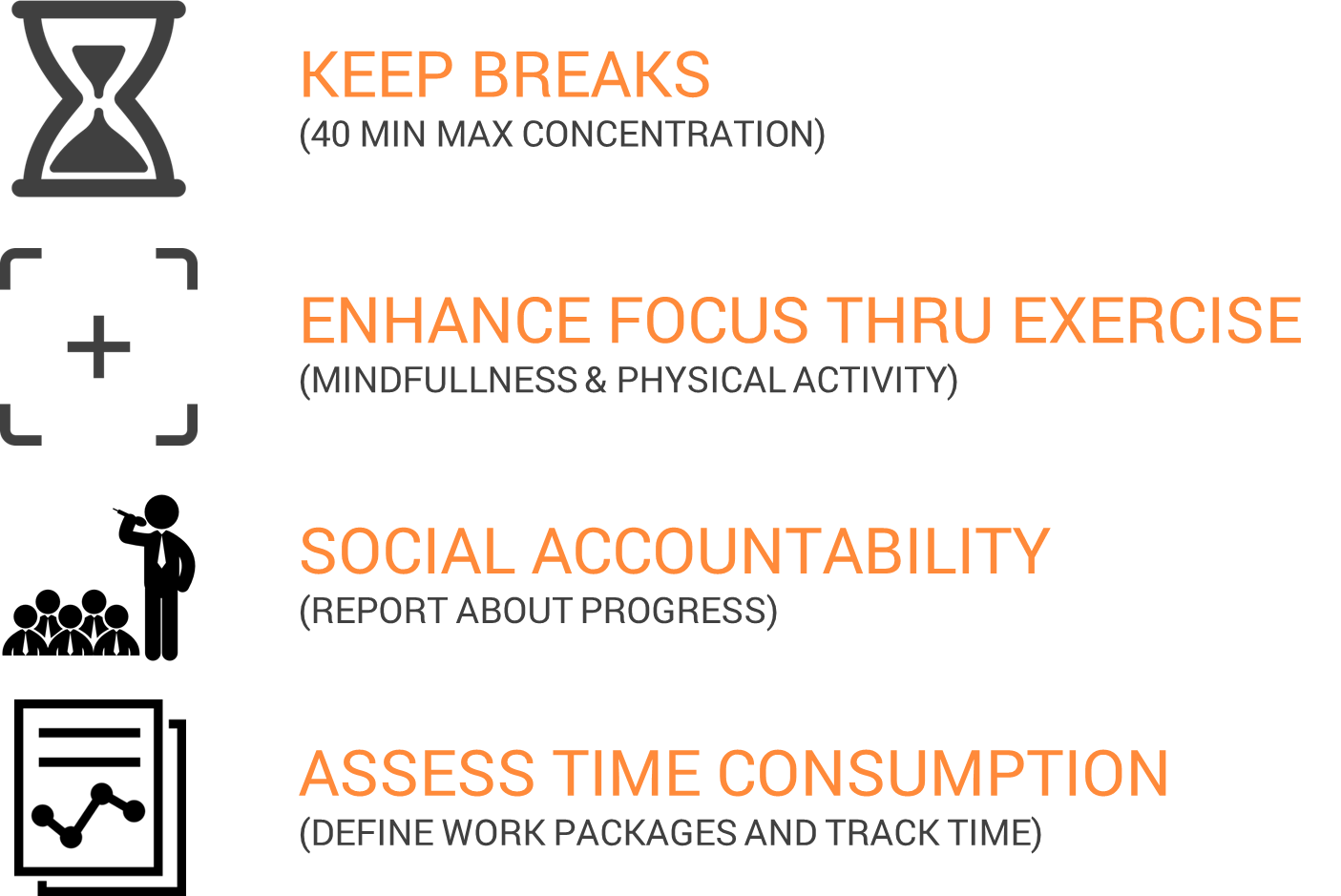 The four principles behind the Hoffice structure

You eat: After three to four blocks of work/break, the lunch break awaits you. Often people chose to co-create a potluck meal: when everyone brings a small contribution, you will end up with a rich buffet. The experience shows that planning is not really necessary; it always works out. And the conversations are just as rich as the menu. After working and sharing your progress during the morning, you will have plenty of questions on what exactly it is the other people do. This network building and creating new opportunities is something which lone workers often miss. And when the conversation moves past work, you'll learn more about the interesting people that Hoffice attracts.

You celebrate: In the afternoon, the 45 minute work /15 minunte break cycle continues for three to four more blocks. Then it’s time for you to gather again in a circle, report back if you’re happy with your progress and goal attainment. If you are: don’t be shy and receive applause from your colleagues. If you didn’t: don’t give up. You did what you could and you got a better understanding of how to set realistic goals! You can find a nice ritual to celebrate together, like clapping three times and shouting “Yes! Yes! Yes!” together. And maybe you want to stay a bit longer with your host and celebrate that you have a full evening ahead, where you don’t need to think of doing more work.

Hoffice is always a gift

Now you know how a Hoffice day is structured, but there's one more important brick in the Hoffice concept: Hoffice is always a gift! It’s a gift from the host, who opens her or his home to you. But also as a participant it is about giving your time and personal resources to the group. Christofer says that, “when people feel that they receive a gift, they want to give back something. And when we give, we often get much in return – which means we have even more to give. That’s how positive circles of giving get going.” You can help your co-workers with business tips and leads for new partnerships. Or you can bring homemade snacks for the afternoon energy gap.

Try out Hoffice in your local community or home alone

Excited to try Hoffice? A good way to start is to joine a local Hoffice event. Check the Hoffice community map to see if there is already a Hoffice community close-by. There is now around 100 groups on four continents. Some of them are more active than others and you might need to wait a bit till an event comes up…or host an event yourself!

If there’s no active community nearby and you’re not yet convinced enough to start on your own, then try the Hoffice structure first home alone, or even better together with a friend or family member.

There are several YouTube playlists, which you can run on your computer in the background while working. The playlists will remind you to take a break and set your intentions for the next workblock (this is harder when you’re alone, but very rewarding when you do it) . In the breaks it will play a video proposing a break activity: a short workout, yoga, self-massage for stress relief or a guided meditation.

Start your own Hoffice community

What if you liked Hofficing alone, but there is no Hoffice group in your town? Then start your own Hoffice community. Here's how:

Andreas is a free spirit, who is constantly seeking to reduce his lifestyle and his need for material goods. This gives him space to support and co-create a wide variety

Andreas is a free spirit, who is constantly seeking to reduce his lifestyle and his need for material goods. This gives him space to support and co-create a wide variety of projects, which really matter to him. Right now he is engaged in Hoffice, the Gift Circle network, creating an Authentic Relating Festival, establishing a co-working space and building his own self-sustaining houseboat.