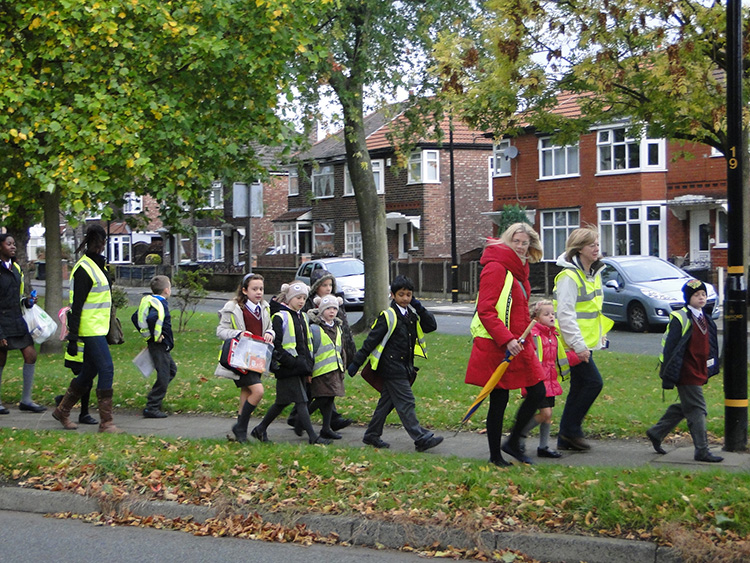 Here's the problem: Fears for children's safety during their commute to school means fewer students are riding bikes or walking to school. More students are being driven to school, which results in more traffic, further eroding students' ability to make their way to school safely. This also contributes to traffic congestion, increased pressure on time-pressed parents and guardians, and lost opportunities for physical activity for students.

Here's how one organization is working on the problem: Conceived by Australian creative planner and urbanist David Engwicht in 1992, the Walking School Bus is an agreed, set route to and from school supervised by adult volunteer "drivers" (often parents) who collect students from various stops. The bus is free, and every child is welcome, whether or not they have a parent who can be a driver.

The Walking School Bus can be as simple and low cost, or as elaborate, as the students and volunteers wish to make it. A ratio of one adult to eight students is recommended. Benefits to students include learning to negotiate the road and their neighborhood, improving social interaction, and getting physical exercise. Benefits to parents include reducing fuel costs, saving time, and gaining peace of mind in knowing that their children are going to school safely. The Walking School Bus often has the support of a local authority and/or the school, but can be self-organized and run by parents and students. The Bicycle Train is a version of the Walking School Bus where the mode of transport is cycling.

Header image of students of St. Hugh of Lincoln RC school in Stretford "on board" their school's "bus" by University of Salford Press Office.